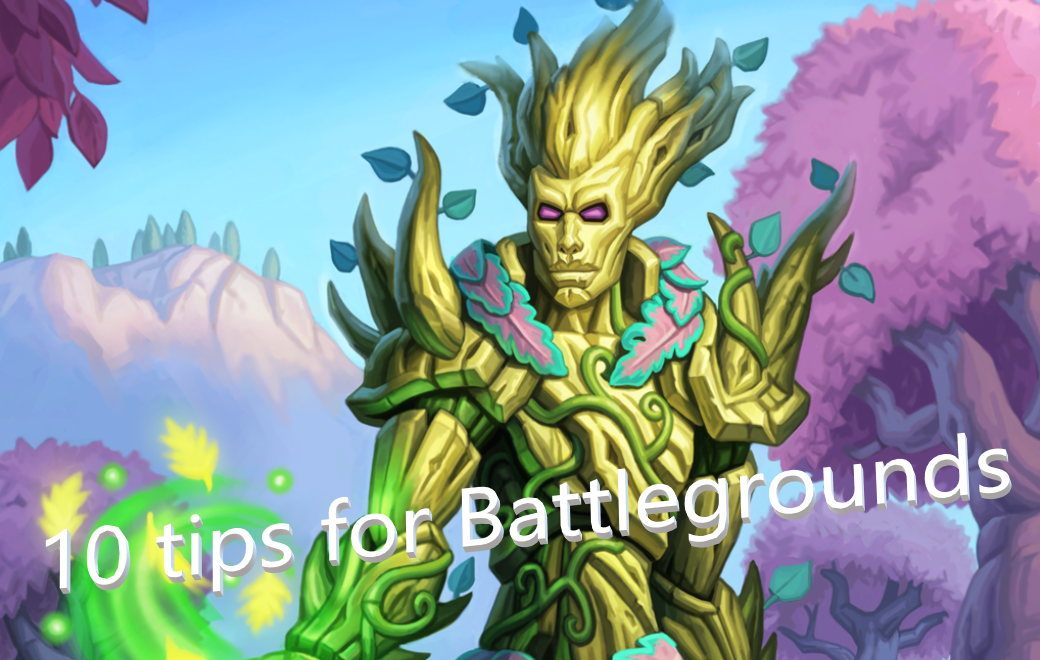 Many players are currently playing Battlegrounds trying to win that golden donut from Bob, but unfortunately, this game is not very obvious on how you can win your lobby. With more than 50 heroes, over 100 minions, and many different successful strategies, it can be confusing how to improve. This list is to help new players and ones that are stuck in the same ELO. Despite the game always evolving, this list should help no matter what meta is going on. So let’s discuss ten easy tips on how to get better at battlegrounds.

Remembering your minions is a basic piece of advice but an essential one. If you want to get better at this game, it is the best way to start. There are two aspects to knowing your minions. First, know which minions belong to which tier, and second, which ones have synergy. Learning this gives you a great place to start when picking the minions you should buy but also what kind of minions your opponent may have.

Tech minions are an especially important aspect of remembering your minions, as certain ones drastically increase your chances in the final few rounds. Some of my favorite tech minions include Unstable Ghoul to remove Divine Shields, Zapp Slywick to snipe Soul Jugglers or Baron Rivendare, and Deadly Spore to remove your opponent’s big minions.

Remember the heroes, and pick about 15 heroes to learn.

There are 52 heroes as of Patch 19.2.1. Many of them are underpowered and not worth learning, while others are very difficult to utilize despite being seen as strong heroes. I suggest picking about 15 heroes and understanding how they work. Figure out their curve, their preferred tribe, and what type of strategy you need to utilize to be effective.

I suggest ones that you find enjoyable to play or ones that are easy to understand. Heroes like Lich King, Arch-Chief Rafaam, and Ragnaros, the Firelord because they help you learn the game’s fundamentals. But that does not mean you should not know who the other heroes are. Try to remember all of the hero powers for every hero so that you can plan for the upcoming fight.

For example, if you’re fighting an Al’Akir next, then you should put a weak minion in front in hopes of hitting their minion with taunt and divine shield. If you’re facing a hero who uses the Rafaam-curve such as Maiev, at turn five, they are most likely going to use all of their gold to upgrade and hero power. If you’re facing a Rafaam, be sure to give them a weak unit, so they get low value from their hero power. Use this to your advantage and form a Warband that will deal heavy damage to their weakened board.

Use your gold efficiently, and don’t leave hanging gold.

Do not waste your gold. Every single purchase counts. Whether it’s buffs or just stronger minions, you can always improve your Warband. If you have five gold during the mid-game, and you see a Warband with one minion you want and a buff card such as Menagerie Cup, use up all of your gold in this roll. Buy that Menagerie Cup, sell it, and buy the minion you want. Even if you only have one tribe, it is better than wasting the two remaining gold with rerolls.

Don’t force anything; pick what’s strong and be willing to change strategy.

Alexstrasza may want dragons, Jaraxxus may want demons, Flurgl may want murlocs, but sometimes the game doesn’t let you get them. You can’t keep rerolling trying to find your tribe, and it’s better to buy a minion than to reroll. For example, let’s say you are Millificient on turn six with eight gold and only five minions. You can only afford to reroll twice and buy two minions. While you may want to look for Mechs, you might have to settle for what Bob gives you. It’s often better to pick strong minions like Bronze Guardian and Crackling Cyclone than it is to try to find one Deflect-o-Bot.

The importance of positioning in Battlegrounds

Positioning is one of those things that is often completely overlooked or simply misunderstood. The general rule is to have your order of attack be from strongest to weakest. But if you have a Spawn of N’zoth or Jeweled Macaw plus a deathrattle that doesn’t spawn another minion such as a Spawn of N’Zoth, Kaboom Bot, or Goldrinn, the White Wolf, then, of course, have those minions attack first.

If your opponent is someone with divine shields, usually someone building mechs or an Amalgadon with poison and divine shield, put a bumper first. A bumper is a weak minion that you can use to pop their divine shield without harming the strength of your Warband.

If you know your opponent has a cleave, position around that. Put a taunt on the far right side of your board and put a worthless minion, like a bumper or a minion with a divine shield or huge amounts of health, next to them. Doing so minimizes the value they get from using cleave.

To play around the above tip for your own cleave, sometimes you want to have your cleave minion in position two or three. Positioning in this way gets you around their taunt and gives you a better chance at hitting three minions instead of two.

Sometimes you will not understand a game on your own without the help of seeing how higher-ranked players do their turns. If you have free time, watch one of the top streamers on twitch and analyze their play. When you watch their stream, imagine you are playing as them. If you see them do a play that you are unsure about, think about why they did that. Would you have done the same play? Assess your reasoning why you would or would not, then understand why they did it their way. Put yourself in their position and dissect everything they do.

I would advise avoiding watching higher ranked players on Youtube, as the videos posted usually show only their highlight games. Mistakes and struggles don’t make for great entertainment, despite being drastically more valuable for learning.

Understanding Triples & when to avoid combining your minions

It’s obvious that the general rule is that you should triple for the highest tier minion possible – but there will be times where you can’t afford to do that. If you’re stuck freezing for a minion for multiple turns because you are far away from tripling for a tier five or six, then it’s often not worth wasting precious resources on trying to get that. Settle for a tier-three or four.

However, if you are stuck with a pair that you have been looking to triple for a long time, you have to let them go eventually. You cannot keep holding onto weak minions forever, because you are going to fall out of power compared to your opponents eventually. You can always replace them with a much stronger pair you will find eventually.

A final note do not triple minions that are better off separate. Two Deflect-o-Bot’s with huge attacking strength, two Amalgadon’s with divine shield and poison, or two Murlocs with poison are examples of minions that you should avoid tripling. They’re much stronger separated in most situations.

When do you decide to play for the win or to play to not-lose?

There are games where you need to realize when you need to choose between aiming to get first place and not losing the game. Usually, you make this decision around turns seven to nine. If you are behind the other players, you have to cut your losses and be less greedy. Buy minions that stabilize your board’s strength, such as Majordomo Executus, divine shield synergy such as Bolvar, Fireblood, or Drakonid Enforcer, or continuously buffing your minions with Menagerie Jug.

But it does not have to be that extreme. If you’re on top four and know there is one person with an unbeatable Warband, then that’s another occasion of playing not to lose. Make your build strong enough to beat the other members left in the lobby so that the only one left is you and that unbeatable player. While it’s not first place, second is nearly just as good.

Don’t press the reroll button until you know for what minions you are looking for.

Take your time when you are doing your turns. Look at your board state, look at the minions you could get at your tier, and think to yourself whether it is in your best interest to continue rerolling. Maybe you are already stronger than your opponent, and you are only looking for triples, then it’s best just to upgrade.

Unless you’re mech or demon, you have a better chance going to tier five looking for a powerful card to make your board stronger. In the current meta of 19.2.1, tripling at tier four to get a tier five minion is often not the best decision. One reason for that is because of the dilution of the tier-five minion pool; you are more likely to whiff on a win-condition you want.

The importance of reviewing your games in Hearthstone Battlegrounds.

Something that helped me improve immensely was recording my games to review what I did wrong. Doing so allows you to try and figure out where exactly you messed up, even if it’s the tiniest mistake. Maybe you bought a minion that ended up sold without doing much. That’s a lesson that you need to know how to use your gold better.

Maybe you lost because you ran your best minions into their poisoned minion. That’s a lesson to be cautious on your positioning and underestimating your opponent. There are so many ways to improve by just watching your games. Every mistake can be reviewed and flourish into lessons you learn to get better.

I hope that these tips end up helping you all in getting better. Every time you may find yourself stuck trying to raise your ranking, be sure to check back here to see if you’re missing anything in your gameplay. Now get out there, win your lobby and stay away from Bob’s spicy pretzel mustard.

If you got any more questions, just visit my stream & I’ll be happy to chat! I hope to see you guys there. Also, make sure to follow Mewwy on Twitter!