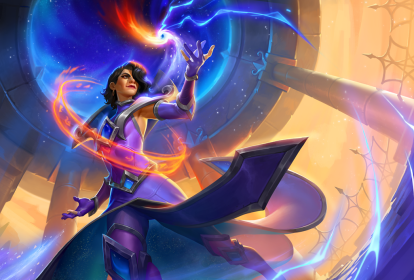 This guide is a part of our new basics series that discusses trading and many other topics in great detail. This guide covers the basics of value and card evaluation, topics important to trading. You can find the previous article about the basics of trading here. The next guide from SteemedMuffins builds on the topic of trading further by studying specific deck types.

One term beginners may have heard of is Value. Value estimates how much you get out of a specific Hearthstone card in return for what you put in. For example, Flamestrike destroying multiple minions is a lot of value – one card for many cards. However, in this case, “value” does not just refer to card advantages. Dragonbane, from Descent of Dragons, triggering and hitting your opponent’s hero, is valuable for a Face Hunter deck since it advances the game plan – trading resources for the opponent’s life total.

Judging the value of a Hearthstone card in reference to the deck that you are building is a good way to evaluate cards. A card like Flamestrike has value in a control deck but does not function well in an aggressive deck. Even different styles of the same deck archetype will have different cards. For example, there have been many different controlling Warlock archetypes, but many do not play Hellfire, a staple in early Handlock strategies.

The basics of Card Evaluation

Hearthstone Spoiler seasons are an especially difficult time to evaluate cards. Players are trying to estimate a card’s value but have no reference point to how good the card can be in a specific deck, let alone a specific meta. Only after there is a defined meta or an archetype can players begin to explore and evaluate different options.

The reason we have to estimate the value of a Hearthstone card is that value is fluid. The capacity of value for a card is a card’s potential or ceiling. The ceiling of a card is the best possible outcome or the situation where the card generates the most value possible.

A card like Cycle of Hatred from Scholomance Academy has very high potential but never found a place in a meta deck. Cycle of Hatred has a very high ceiling where it could wipe your opponent’s board and provide you tempo and your board presence.

The difference between the ceiling and the floor is the card’s range. For proper card evaluation, one has to pay attention to the range of a card. Some cards have a small range, such as basic cards like Boulderfist Ogre. Boulderfist Ogre is always a six mana 6/7 at worst and is a six mana 6/7 at best. Cards like Yogg Saron or his Puzzle box have a large range with a ceiling of winning you the game upon casting it, or the opposite and lose you the game on the spot.

Card Evaluation with the concept of Randomness

Evaluating how much value a card generates becomes a much more difficult process when involving random generation. One of the first powerful random number generator based cards printed in Hearthstone was the card Piloted Shredder from Goblins vs. Gnomes. Piloted Shredder replaced Chillwind Yeti as the default four drop inclusion in most decks. The reason was because of how that card stacked up against the opponent’s removal and the potential for value. A Fireball could destroy a Chillwind Yeti 1-for-1, but a Fireball could only destroy half of a Piloted Shredder.

The issue is that neither player can prepare for half of the card. It could be a Millhouse Manastorm, or it could be a Doomsayer. The random number generator always adds to the range of a card. When evaluating a random number generator based card, it is impossible to say that one card is strictly better than the other. Chillwind Yeti can be better than Piloted Shredder in cases where Piloted Shredder creates a Doomsayer or a 1/1.

Fringe and Base Cases

When evaluating and comparing cards, draw focus to the base case rather than the fringe cases. The base case is the most common possible outcome. A fringe case is a less common case that normally has a very drastic outcome.

The range of a card is never the best metric for evaluation. A trap beginner Hearthstone players fall into when evaluating cards is looking at the fringe cases. Sometimes a card is only good in a very small sample of cases. Beginner players play cards based on the fringe case, leading them to lose games. The reverse is also true; sometimes, a card is only bad in a select few scenarios.

The next step Beginner Hearthstone players need to focus on is threat evaluation. It can be easy to understand the value of cards when you are playing them, but it is more difficult to assess your opponents’ cards. Threat evaluation in Hearthstone happens when your opponent has more than one minion on the field, and you have the option to destroy one of them.

If threat evaluation is so important, how do we use it to our advantage? Normally threat evaluation comes naturally from playing a lot of Hearthstone. If you want to speed up the process of learning, you can use reasoning. Every time you face a threat evaluation decision, ask yourself, is there something on the board that will kill me if I don’t remove it? Is there any card that will get out of control if I do not remove it now? Do I need to save my removal for a more dangerous threat later?

For example, your Zoo Warlock opponent has a Knife Juggler and a Bloodfen Raptor while you, playing the Mage class, have a Frostbolt. Assuming neither of these threats will kill you, which of them could get out of control if left on the board for too long? Knife Juggler can generate almost infinite value as long as your opponent can keep summoning minions. Even though Bloodfen Raptor has more attacking strength, Knife Juggler likely does more damage to you in the long run.

Something to remember is that threat evaluation is never certain. In the former situation, if you are at a low life level and your opponent has no cards in hand, you could make an argument to Frostbolt the Bloodfen Raptor rather than the Knife Juggler. The situation where you Frostbolt the Bloodfen Raptor is unlikely, but just remember that threat evaluation is fluid. Just because one card is a threat is a specific matchup or game does not mean that is always the case. Players need to make threat evaluation decisions in almost every Hearthstone game because of how fluid each game is.

After a Beginner Hearthstone player learns how to evaluate threats, the next step is to learn play priority. Play priority is the order in which you play your cards. As an example, you have a Sen’jin Shieldmasta and a Chillwind Yeti in hand on turn four. Which card do you play first? The answer again is fluid and changes between games. Against an aggressive deck with an established board state, playing the taunt minion to slow down the game would be the better choice. Against a more controlling deck, playing Chillwind Yeti to establish a better board presence would be better.

Soon there will be layers to thinking about what to play. Imagine that you were playing against a controlling mage. Your default decision might be to still play out the Yeti on turn four. Yeti would normally be the better play, but your opponent might also have a Fireball.

A Sen’jin Shieldmasta would be a better target for Fireball than a Chillwind Yeti. After your opponent spends their turn four removing Sen’jin Shieldmasta, you will have a Yeti to punish your opponent. At the same time, this line of play may be a fringe example and not one that you would use in a real Hearthstone game. Understanding meta and matchups is a key way of understanding play priority.

This guide covered some more beginner topics on value, potential, threat evaluation, and play priority. All of these are basic concepts that every aspiring competitive Hearthstone player should learn. The next guide in the series will go over each specific deck type and discuss how they use their resources to win games.