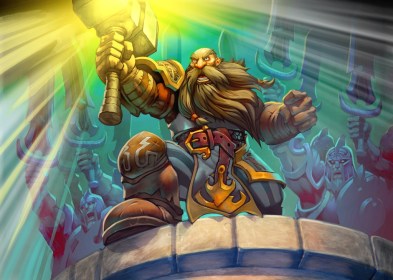 Odd Paladin is a deck many people don’t believe in quite yet. I’m here to convince you otherwise and give a guide on the deck. The Odd Paladin deck can beat all strategys with a decent winrate. In the October season, I, Cubyyy, played Odd Paladin to the top 20 Legend ranks.

Odd Paladin received a lot of help with the Scholomance Academy expansion. There are several new cards that now define the archetype and allowed the previously strong meta deck to reach the top of the standings. The main cards I’m talking about are Tour Guide and Animated Broomstick. Animated Broomstick allows us to make much more efficient trades than before, where Tour Guide is effectively Hearthstone’s first one-mana 3/3.

The ability to play Tour Guide and Hero Power on turn one is an opening move that no deck in the Wild Hearthstone meta rivals. The deck core of Odd Paladin is split up into two parts. The first is our must-haves. Tour Guide, Animated Broomstick, Lost in the Jungle, Righteous Cause, Righteous Protector, Muster for Battle, Steward of Darkshire, Warhorse Trainer, Quartermaster, and Corridor Creeper are cards the deck wouldn’t exist without. Each of these ten cards are two-off must-haves for the Odd Paladin Archetype. In addition to this,

Baku the Mooneater is the reason the deck exists, so he deserves a mention here as well.

Besides the first 21-must haves, an additional four cards are worth including one copy of, for their unique abilities and powerful effects. These are as follows: Never Surrender!, Divine Favor, Blessing of Authority, and Crystology. Crystology is the exception on this list, as there is a case to make for including two of the card in your build. Blessing of Authority is another you can include two copies off. I prefer having more than one, but as some lists only use one it is listed separately from the rest.

Other options worth including in the one-mana slot are Beaming Sidekick, at the risk of making Crystology less consistent, or Adaptation for its flexibility. Another tool I like is the Never Surrender secret. Never Surrender! is particularly valuable against classes like Quest Mage or Control oriented Warlocks.

Besides this, Loatheb is fantastic against several of the current meta decks. For example, against Priest and Quest Mage the card proves its worth a lot. Delaying the board clear from a Raza Priest, or locking Quest Mage out of playing an entire turn is unbelievably valuable.

In the past players included the Pirate Package in the Odd Paladin archetype. However, with the introduction of Tour Guide, the new builds far exceeded the old build in its consistency.

The Mulligan for Odd Paladin

The mulligan for Odd Paladin is simple. You always keep Tour Guide, two if you get the chance to. Corridor Creeper is fantastic, always keep one, sometimes two if you already have a turn-one play.

Other tools like Righteous Cause, Muster for Battle, Warhorse Trainer, and Crystology you keep one of, whenever possible. Finding a consistent early-game curve allows you to get into an advantageous position to quickly close out the game.

There are also cards you should never keep like Baku the Mooneater, Leeroy Jenkins, and Steward of Dakshire.

Animated Broomstick and Righteous Protector are fantastic in matchups against other aggressive decks due to how well they allow you to trade. And Never Surrender! is the card you want against the before mentioned control matchups.

How to play the deck?

Odd Paladin is a deck made to control other aggressive decks by having the ability to clear and fill the board over and over again. Against non-aggressive opponents it goes for a beatdown or grinds them down. The Odd Paladin deck is capable of generating massive amounts of token minions that many decks simply don’t have answers to. Try not to give up early against controlling opponents, the deck does more than most give it credit for.

Aggro druid is a deck that saw a rise in popularity in the last 2 seasons. Odd paladin is very good against it. The ability to clear their board with Animated Broomstick and flooding the board every turn while they run out of cards rather quickly makes this a great match up. You want as much board flooding as possible. Our best cards in the matchup are Tour Guide, Lost in the Jungle, Animated Broomstick, and Corridor Creeper.

A very common match up. You usually try to flood your board early without them being able to remove it. Never Surrender! is a massive part of our gameplan here as it can take the Priest players by surprise. Then you finish them off with Quartermaster. This strategy doesn’t always work but don’t worry not all hope is lost! Your hero power combined with some pressure from cards like Warhorse Trainer, Corridor Creeper, Righteous Cause, Blessing of Authority gives you the ability to run them out of cards and slowly beat them down.

A deck that has been haunting this gamemode for almost a year now. Never Surrender! is one of your most important cards in this match up. To win this you have to avoid their Waker swing turns. Try getting a few minions on board and then play Never Surrender!

You have to remove Flamewaker from the board as soon as possible. By the time they tempo a giant you are close to winning anyway so unless there is an immediate lethal threat there is no need to kill it.

Make sure to consider the randomly generated cards, notably the secrets, and how they might affect your board. You can’t always play around each of them, but try and be mindful.

A rare match up but a rather crushing one. You have to be 100% aggressive in this match up. Never Surrender! is key to beating Dark Skies and Defile.

You usually have to beat them before turn 6. One Voidlord is beatable with Blessing of Authority sometimes. However, after the second demon, the game usually is lost.

The mirror is not very common. You aim to get board control early and buff up your dudes to maintain that control and finish your opponent. Cards like Blessing of Authority or Quartermaster on a wide board end this quickly. Righteous Cause and Tour Guide are your best friends in this match up.

While Spreading Plague might seem like a crushing card you can beat it with Quartermaster. You try to kill them before they assemble their win-conditions. The Kael’thas swing turns are usually not beatable, so try and finish them off as soon as possible.

I would place Odd Paladin around the Tier two area. It has a decent match up spread but it doesn’t have the absolute crushing match ups against top-level decks to put it into Tier one. It excels at beating other aggro decks and is well positioned for the early legend climb.

Looking to learn more about card games? Check out our card game dictionary by writer Maym! Do you want to have your deck featured or work with AceGameGuides on creating strategic content? Email Arend@AceGameGuides.com, and we’ll talk! For more of AceGameGuides, be sure to join the new discord!