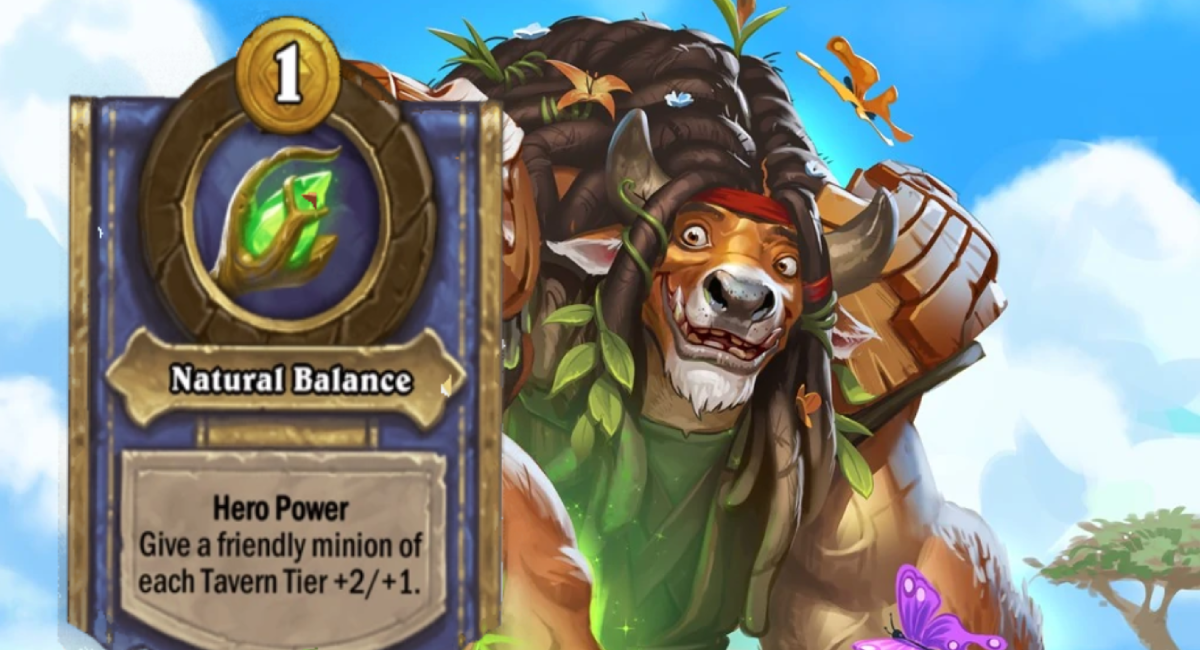 Guff Runetotem is one of the best Battlegrounds heroes in Patch 20.2.2. Guff Runetotem’s strength comes from its build-in win-condition and build-path. The strategy for Guff Runetotem is quite linear in every game you get to play with him. That makes him a great hero to add to your arsenal, so here is everything you need to know to get started with Guff Runetotem.

For those not familiar yet with Guff Runetotem’s ability Natural Balance, it grants a one attack, one health buff to a minion in your Warband from each Tavern-tier. As expected, Guff Runetotem was one of the heroes affected by the balance changes of patch 20.8.0, more on that below.

Looking for something different? Why not read Mewwy’s guide to Xyrella, or HZs recent Dancin’ Deryl guide instead. Two of the most powerful heroes that got added to Battlegrounds in the 20.2.2 expansion.

What the balance change of Patch 20.8.0 mean for Guff Runetotem

As expected, Guff Runetotem was one of the heroes receiving balance changes in Patch 20.8.0. The attack nerf is significant and certainly noticable when playing Guff Runetotem, however, he is still worthwhile to play. The strategies haven’t changed much, but if we find a strategy that is better than listed below, we’ll be sure to update all of you right away!

To optimally use Guff Runetotem’s ability, Natural Balance, you should try and reach the higher Tavern tiers as soon as you can. Try and use the tempo from the extra early-game stats Natural Balance grants to take risks and reach Tavern four as soon as possible.

Since Natural Balance isn’t as powerful as the other abilities in the late-game stages of Battlegrounds, utilizing your early and mid-game strength is necessary. Build a strong Warband, and then look for late-game scaling units like Charlga, Kalecgos, or Lightfang Enforcer.

How you get the most out of Natural Balance.

Since Natural Balance grants stats to a minion from each Tavern-tier, you should aim to have at least one unit from Tavern one to four by the eight-gold turn. You can power-level to reach Tavern four by the seven gold turn in some cases, but triples or other opportunities cause you to divert from that game plan.

Timing Natural Balance is vital to make sure you get the most use out of your unit. If you are selling or picking up new units during your turn, make sure to decide the order in advance. Doing so can prevent your buffs from landing on the wrong targets.

Since many of you reading this won’t be familiar with all the different leveling strategies yet in Battlegrounds, here is an example of a common strategy you will follow as Guff Runetotem.

After that, your game plan comes back to what we mentioned earlier. Use your current strength and continued scaling in the mid-game to find something to stay relevant later in the game. Units like Brann Bronzebeard, Lightfang Enforcer, Kalecgos  Arcane Aspect, or Chargla perform the best for this role of your Warband.

What Warbands work the best for Guff Runetotem?

Due to Guff Runetotem’s versatile hero power, there is no answer as to which composition is best to play for in – every – game. Menagerie is one of the simplest to play for due to that strategy having the largest variety in options for which minions you want to pick up. However, you must stay open to different compositions and Tribes when you play Guff Runetotem. There are so many different paths you can go down, and nearly every build in Battlegrounds has an adaptation to maximize Natural Balance.

Maximizing your possibilities is tough to explain in words, but just try and think of what Warbands the minions you pick up could fit. For example, a unit like Harvest Golem is more versatile than something like an Imprisoner on turn three (five gold) because Annoy-o-Module could significantly improve Harvest Golem later in the game. Or, it could simply serve as a reset for a Deflect-o-Bot if you manage to pick one up later in the game.

Again, I just want to say that since it is the way to improve your chances with Guff Runetotem massively. – Stay open-minded to all compositions. –

What are the best tribes for Guff Runetotem.

As with most heroes who can improve their minions, any minion that better than average utilizes the extra stats is one Guff Runetotem is happy to see. From the Beasts tribe, for example, a unit like Cave Hydra is fantastic. For Elementals or Dragons, the staple Bronzewarden and Crackling Cyclone perform the best by a lot.

However, the standout tribe for Guff Runetotem is the Mech Tribe. Between the ability to grant your starter minions Divine Shield through Annoy-o-Module, or in the late-game through Cleave from Foe Reaper, it does many of the things Guff Runetotem wants to utilize. Without the Mechs tribe available, Guff Runetotem suffers a significant reduction in win rate, so keep that in mind when selecting your Hero.

Guff Runetotem is a prime example of a hero that is incredible at consistently reaching the top four spot. Unlike many top four heroes, however, Guff Runetotem also has the potential to take the crown. In most cases, your game plan involves Upgrading your tavern aggressively, sometimes reaching Tavern five as early as nine gold, or even going straight to Tavern six by ten gold if your lobby allows for it.

However, if you find yourself with a weak board and low health, you can stay on Tavern four as long as you need to and aim for a top-four position in your lobby. At the start of each turn, try and think of whether you can upgrade your Tavern. Are you going to be strong enough to aim to win the lobby from here, or do you have to conserve your Health total? That decision is especially important around turns seven and eight, where you need to decide between aiming for the win or aiming for not losing MMR.

Let us know how you do and what more you want to see about Guff Runetotem and the other new Battleground heroes.