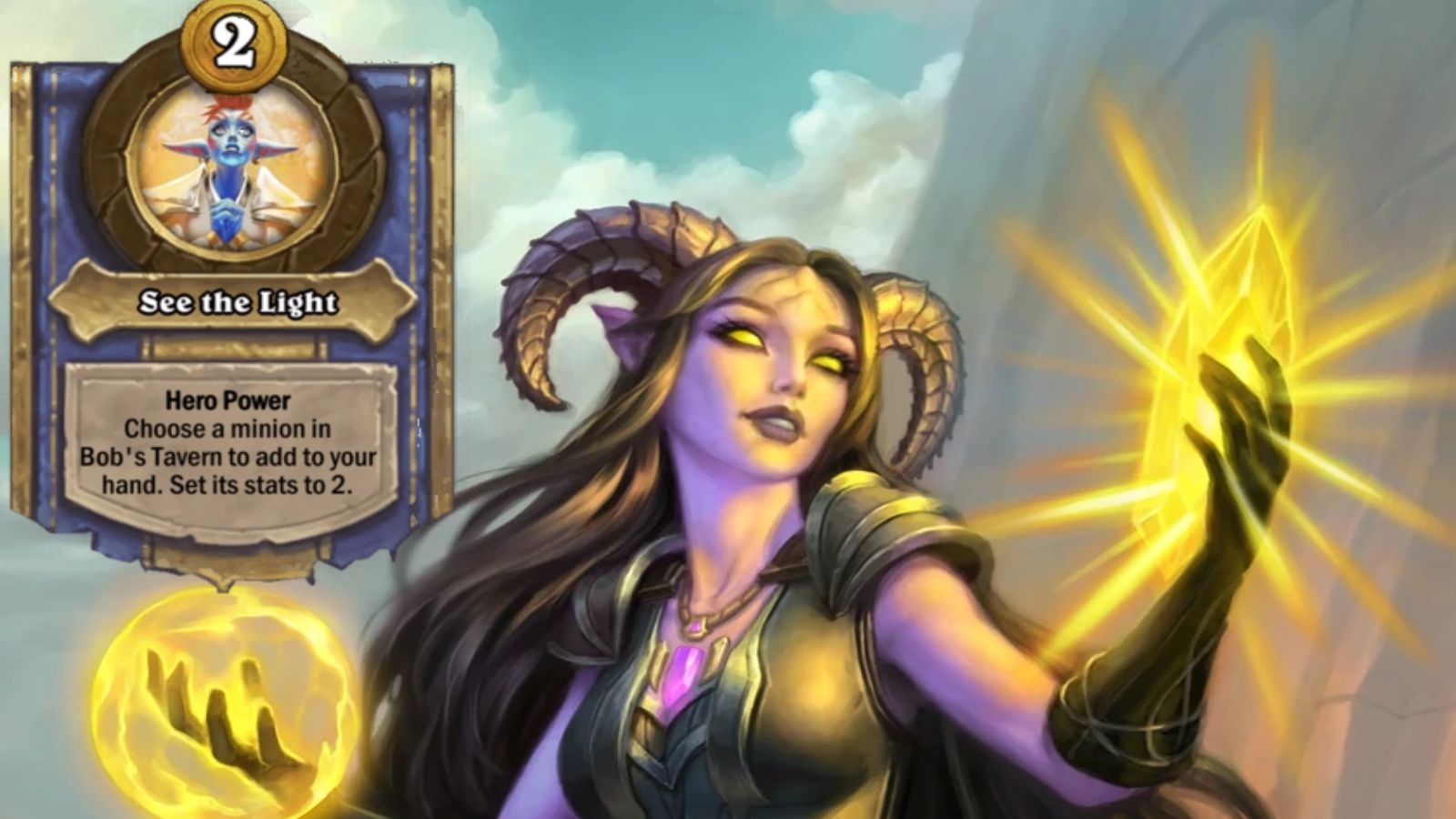 Three new heroes came out during Patch 20.2. Amongst them is Xyrella. Xyrella is a powerful hero who can purchase a minion once every turn at the cost of two gold, with the drawback of turning said minion’s stats into a two health and attack unit. Xyrella’s hero power, See the Light, allows her to be flexible in her leveling curve while being able to make cheap purchases compared to most heroes.

Understanding the strengths of Xyrella’s ability, See the Light.

See the Light allows you to make cheap purchases that normally would be too expensive at the usual three gold cost. That works by spending two gold to purchase the minion you want to pick up and then immediately sell it after using its effect or Battlecry. That type of play works very well for Xyrella, whose main goal is to use See the Light to gain value. Value for Xyrella often means picking up strong Battlecry units at a cheaper cost. Value could also be as simple as picking a unit like Freedealing Gambler to generate additional gold.

Xyrella functions well with the majority of Tribes. That said, Xyrella and See the Light synergize better with the Murlocs, Beasts, Demons, Pirates, and Elementals tribes than with the remainder of the options due to their various battlecries and effects. Mechs and Quilboars have some synergy but do not take great advantage of See the Light like other tribes. Dragons have little synergy until you get a Kalecgos.

Looking for something different? Why not read Mewwy’s guide to Captain Hooktusk, or HZs guide to Guff Runetotem instead. Two of the most powerful heroes that got added to Battlegrounds in the 20.2.2 expansion.

Two simple starter curves to follow for Xyrella in Battlegrounds

The two curves Xyrella plays are primarily decided through which minions you get access to on round one.

Curve one – Utilizing See the Light

The first curve is the ideal line you want to follow with Xyrella. It allows you to get a decent board going and to reach Tavern Four ahead of most people in your lobby. However, it requires a token or another form of additional gold generation such as Deck Swabbie to pull off perfectly. If you can’t find the additional gold in the first three to four turns of the game, switch to the standard curve instead.

The second curve for Xyrella focuses more on picking up pairs, similar to one of the original Battlegrounds heroes, Yogg-Saron. One of the main benefits of the second strategy is that you’ll end up much stronger in the first couple of rounds in the game, which allows you to level more aggressively in the turns after it.

Here is just one example of the second strategy.

(B) However, if your opponent raises their tavern, or if Bob’s shop isn’t good enough for what you are looking for, you should consider raising your tavern to three as well.

If you do decide to raise your Tavern to Tavern Three, your game plan changes from the example. Look for units that get you through the mid-game, and look for opportunities to continue raising your Tavern level.

(A): Complete a triple (if you can) to look for a win-condition unit from Tavern Five. Or pick up the best minions you can to improve your board-state ahead of the next turn.

(B): The alternative here is to fast-level to Tavern Five. The option is far higher risk, but you must look for the opportunity to. When this becomes an option is when your opponent also raises their Tavern in the same turn. Another example might be when you face the ghost, or similarly, a low-health player who is likely not going to be as strong.
Xyrella also has the option of power-leveling to Tavern Five as early as turn seven. That strategy becomes an option in games where you find multiple token generators or a scaling unit like Micro Mummy. In some situations, investing in a pair of Wrath Weavers or a pair of Micro Mummies also becomes a worthwhile strategy to utilize alongside your power leveling.

Do this curve if Murlocs, Alleycat, Elementals are available. Mechs being in is a nice bonus too. Really helpful if no one else seems to be doing this curve.

Turn 1: Buy a token generator or a strong tier 1. Hero power if necessary.
Turn 2: If you have a token, sell it. Hero power and buy one minion. Focus on token generators, pairs, Micro Machine or Acolyte of C’Thun.
Turn 3: Hero power and buy. Try not to triple.
Turn 4: Buy two minions. Hero power if necessary. Try not to triple.
Turn 5: Upgrade. Sell one. Upgrade.
Turn 6: Upgrade. Triple. If you think you are strong enough to not need another triple, hold onto one triple and get a tier 6 next turn.

Xyrella’s special curve – Only possible if Bob is in your debt.

On the very rare occasion that Bob offers you a token-triple to start out the game, a special curve is possible for Xyrella. The curve below is the fastest possible Tarvern-Tier five unit that doesn’t result in losing the game.

Once you jump to Tavern four, the idea is that you managed to pick up pairs and (hopefully)  found yourself a triple to get a win condition going. Even if you didn’t find a triple, and you only have pairs, you should be in a strong position. From there, you have two options, both situationally the correct decision, both with their own set of risks to consider. These two options are as follows:

When and why you upgrade to Tavern five early.

The strength here comes from the gold advantage you have when you find that third copy of a unit you need. If you have a triple frozen in Bob’s shop from a previous round, it is almost always correct to upgrade to Tavern five, assuming you aren’t at risk of losing the game that early on.

Another situation when you should consider leveling up is if you find yourself with multiple pairs at the nine and first ten gold rounds. By upgrading on turn seven (Nine gold), for example, you can reach the Tavern six win-condition minions ahead of most other players in the lobby.

Following the early-leveling strategy, however, comes with some risks. Going through with that game plan almost guarantees you lose at least the next round since other people will have upgraded their board state while you invest your gold in the future rounds. Most of that risk is mitigated by your opponents upgrading their turns at the same interval as you want to. That is very important to keep track of during each round. However, using your hero power on minions in the cheat list could keep your Warband strength on par with your opponents.

When and why to stay at Tavern four.

Choosing the “consistent” path has many direct benefits. You stay at a higher life total on average as your board is stronger initially. Finding triples is easier since the available minion pool is smaller. And last, you are more protected against the aggressive heroes in your lobby (if there are any) or simply players who are using Taunt compositions or other mid-range style Warbands to pick off players trying to upgrade their Tavern.

However, the main risk of that playstyle comes from the times you’ll end up finding a triple in awkward situations. The main problem is finding a triple when you don’t have gold to raise your Tavern, but also there aren’t enough minions in the shop you feel comfortable buying, leaving you with a lot of excess gold.

With either strategy, plan ahead. Try to think of how your board develops in the coming turns. And what your options are, based on the decisions you make now. For Xyrella, turn seven is one of the most important turns in the entire game as it decides much of how the remainder of your game plays out. Take your time, think about your options, and avoid wasting gold.

As a general tip, always plan out your options and think about your situation and how it will play out. Turn seven might be your most important turn, as it will dictate your flow of the game from now on.

What Warbands and compositions does Xyrella look to play?

Xyrella’s Tribe options are quite flexible due to See the Light’s near-infinite uses. For example, with the Murloc Tribe, you can use See the Light on Brann Bronzebeard or any other Murloc battlecry to get an additional gold every turn. A similar strategy works for the Mech tribe. Try and use See the Light on Battlecries and minions that aren’t affected by the stat change, like Iron Sensei.

Other tribes like Dragons, Beasts, and Pirates don’t use See the Light as effectively besides some helpful situations here and there. For more on that, see Xyrella’s Minion Cheatsheet at the bottom of the page.

Elementals, Quilboar, and Demons all work pretty similarly with See the Light. Besides the obvious “buy a battlecry for one less gold”-plan, these tribes work well with Xyrella’s ability since you can also use it on nearly every minion of these tribes. Whatever your current Warband centers around, you can find buffs, enablers, or scaling tools whenever the opportunity presents itself. Some examples include Demons for Wrath Weaver, Elementals for Nomi, Kitchen Nightmare and Lil’Rag, and Quilboars like Sun-Bacon Relaxer or Blood Gem generators.

That is all you need to know to get started with Xyrella. Let us know how you do learning one of the latest Battlegrounds heroes. You should look forward to Mewwy’s next guide covering Vol’Jin! Best of luck on your Battlegrounds climb and stay away from Bob’s disgusting pretzel mustard.

Cheat Sheet addition. A simple list of minions worth picking up with your ability.

There are many minions with positive uses for Xyrella’s ability See the Light. These positive effects may range from a simple buff in stats to saving gold on units of which the stats aren’t important. Here is an easy-to-use list of minions for every tribe in Battlegrounds.

Pirate: Deck Swabbie, Scallywag, Freedealing Gambler, Bloodsail Cannoneer, Southsea Strongarm, Goldgrubber (NOTE: Whenever you hero power with Pirates, they do NOT count towards the buff that Southsea Strongarm gives)