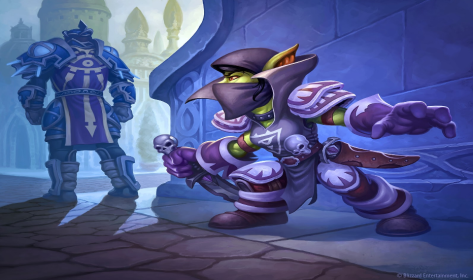 Hi, I’m Pocket_Aces. I’ve played mainly Rogue for most of my Hearthstone career, with over 2K wins. Last season I played Miracle Rogue at 57% in top 1k legend, with my highest rank achieved is 707. I also consulted fellow player McMariners, who played this deck well into the top 200 Legend. I love this deck, but I think it requires a ton of sharp decision making and can be quite complicated, so I thought I would write this guide to help others who like this deck but want to get more out of it.

The Deck Core of Miracle Rogue

The latest version of “Miracle Rogue” centers around consistent tempo plays while waiting to set up knockout punches with Edwin VanCleef and Questing Adventurer. The combination of tempo & large threats, protected by Rogue’s secrets, makes for a unique playstyle in the current meta.

The final core part of the deck is Evil Miscreant. In general, Lackey’s are highly variable and can be used to address a variety of situations. This level of flexibility and resource generation is instrumental in propelling this deck forward.

How to build Miracle Rogue

There are several build paths you can take when constructing your Miracle Rogue deck. A common strategy is including the Dragon’s Hoard & Vendetta package. The extra punch Dragon’s Hoard provides, combined with Vendetta’s board control, synergizes impressively with Questing Adventurer and Edwin VanCleef.

Throughout the Scholomance Academy expansion, the card Cult Neophyte has been common in Miracle Rogue and many other decks. However, with the recent nerf to Guardian Animals, the card is often not worth playing anymore. Druid was one of the key matchups we teched for with Cult Neophyte, and now that there is less Druid on the ladder, the card has much less of a payoff.  The card is still worthwhile for the Miracle Rogue mirror match and the Mage matchup, where the disruption can be game-deciding.

As with the majority of decks in the current meta, teching in weapon removal is risky. Including a tech card like Acidic Swamp Ooze hurts our overall matchups far more than it improves our matchup against Bomb Warrior and Demon Hunter.

How to mulligan with Miracle Rogue

As with every deck, the mulligan can be matchup dependent, but I think this deck is less variable than most. Try and keep in mind that just because a card is cheap, it’s not always worth holding onto in your Mulligan phase. For example, Wand Thief is rarely worth holding onto early on. Wand Thief’s strength comes through its flexibility later in the game, allowing you to discover the card for that particular situation. It is also difficult to use early on given the combo requirement, and quite frequently you won’t yet know what to look for from the discover options.

Pharaoh Cat, however, is always worth holding. It is by far the best early-game resource we have in our deck. You can play it on turn one with no downside, and it gives you the information on how your next turns play out if you generate a low-cost minion with Reborn. For example, Micro Mummy or Temple Berserker are fantastic early-game tools that Pharaoh Cat can generate.

Other early game board control tools such as Backstab are high on the list of cards you want early on, where other removal tools such as Vendetta you should not keep unless you have access to your Dragon’s Hoard alongside it.

Edwin VanCleef is interesting since he is entirely dependent on whether you have access to The Coin. If you do, Edwin VanCleef is fantastic. Without it, however, it is just not good enough. Our other three-mana minion, Questing Adventurer, is rarely a keep in your mulligan. The number of support tools required for it to be worth playing early on in the game makes it more likely to sit in your hand for most of the match. It is much better as a natural draw in the midgame instead.

Other spells such as Secret Passage “feel” good to keep, since it is helpful on occasion. However, from experimenting with the deck for a long time, I’ve learned it’s better not to hold it in your mulligan and instead rely on the additional card in your hand. Unlike other Rogue decks, Miracle Rogue doesn’t run out of cards nearly as quickly, making Secret Passage much less necessary.

Cult Neophyte brings the most mulligan value against classes like Mage and Druid. Another matchup worth considering is Paladin, where we can stifle Hand of Adal on turn two. Overall, the card isn’t a bad turn-two play but consider where in the matchup it will impact your opponent the most.

How to play Miracle Rogue

Miracle Rogue’s overall strategy is not overly complex in theory, but can certainly be difficult to execute. We want to generate consistent pressure and control the board while effectively setting up knockout punches with Questing Adventurer and Edwin VanCleef. These knockout punches are frequently going to miss, as your opponent will have a response. That’s okay; keep generating tension and baiting out removal until your next setup.

Try to prioritize tempo over realizing value. Consistent tempo is the best way to set up effective Questing Adventurer, or Edwin VanCleef turns when your opponent has run out of responses to handle them.

For example, imagine it is turn five on a safe board. If you have Jandice Barov, it will almost always be a better play than trying to go off with Shadowjeweler Hanar or trying to combo into EVIL miscreant. You want to make your opponent react as much as possible. Take away their proactive plays so that they keep having to use removal. Then, when the second or third questing adventurer or Edwin VanCleef turn comes, they’ll be hard-pressed to find answers.

It’s okay to play baby Edwin VanCleef’s. Not every Edwin VanCleef you play needs to be a 12/12. Early 6/6’s on turn 2 or 3 are still very effective and may do more damage to your opponent’s face in the long run than generating a 12/12 on turn 5 or 6 that they have mana to respond to immediately.

The importance of Plagiarize in Miracle Rogue

Plagiarize is an extremely important card, and there is a lot to say about it. Plagiarize is the best secret in the class right now. Just the existence of it can affect how your opponent plays. There are two main ways I like to use this card:

Equally important is the threat of Plagiarize. Putting down any secret in the two spots mentioned above could force your opponent to play around Plagiarize or at least test for other secrets, which can greatly disrupt their plays and delay swing turns. The secret mind game is an extremely important dynamic in this and other secret decks. As a note, make sure to be conscious of hand space when using Plagiarize.

Miracle Rogue thoroughly tests and develops your decision-making skills. With all of the “discover” options. Knowing your matchup and anticipating which options will be useful is the best advice I can give you.

For example, against Warrior and Demon Hunter, we want to find Frostbolt from Wand Thief. But maybe against Paladin or Hunter, we are looking for Devolving Missiles instead. Similar situations will arise with Shadowjeweler Hanar, Lackeys, Dragon’s Hoard, etc. When discovering cards, don’t just think about what could be good for this turn. Think about what is going to help you win the game.

Try and look for Frostbolt or Deep Freeze from Wand Thief. These tools are game-changing in the matchup against Demon Hunter. Other paths that improve our chances of winning against Demon Hunter are to build big Questing Adventurers and Edwin VanCleef’s. Demon Hunter shines with its area of effect removal but struggles against single-large threats. Consistent pressure and forcing your opponent to swing into your minions rather than attacking your hero is the way to win.

How to beat Druid as Miracle Rogue

One way to defeat Druid as Miracle Rogue is through our tech card Cult Neophyte. Combining Cult Neophyte with Shadowstep is incredibly potent in this matchup. The combination allows you to delay your opponent’s response and proactive plays by several turns.

Our other win condition is building a sizeable Questing Adventurer or Edwin VanCleef early on in the game. With Druid’s lack of removal tools at their low-mana turns, this often generates a large lead early in the game.

Face Hunter is a difficult matchup overall. Early tools such as Backstab and Vendetta are vital to turning the game. Other tools, such as EVIL Miscreant’s lackeys, are helpful in our survival of this matchup. Try and force trades from your opponent to preserve health whenever possible, even though your opponents will sometimes go face regardless of what you do.

Similar to our matchup against Druid, combining Cult Neophyte with Shadowstep is a solid play against Cyclone Mage. Focus on tempo and hope for some good luck against their randomly generated tools. Learning the right timing for Cult Neophyte may take some practice, but try and focus on disrupting your opponents whenever possible.

Focusing on tempo is the easiest path to success. Avoid overextending into Libram of Justice or Lord Barov. Try and spread out your big threats and follow the consistent path to victory. Blackjack Stunner early on can disrupt Libram of Wisdom, limiting their cards’ effectiveness, such as Lady Liadrin and Pen Flinger later in the game.

Priests are a favorable matchup for Miracle Rogue overall. However, with how many random cards they generate, anything can happen. My favorite play is to grow Questing Adventurer to 4/4, to avoid Shadow Word: Death, Penance, and many other Priest spells. Then, follow this up by playing several cards on the next turn to deal a large amount of damage.

The Miracle Rogue mirror match gets complicated fast. Shadowjeweler Hanar is the major decider in many of the games. Slowing down your opponents by forcing them to play around multiple secrets creates opportunities to get ahead. An additional benefit of the secrets is that it becomes much more difficult for your opponent to develop threats to start fighting back in the game.

The matchup against Weapon Rogue is one you win through generating clear threats to deal with for your opponent. Anytime the deck isn’t allowed to hit face, you take a step towards victory.

Does Shaman even exist?

I approach this matchup much like Face hunter, given that Overload/Totem Shaman has been all I’ve seen from this class lately. Find the early game removal, then generate a strong board by consistently removing threats and value trading. If you choose to run Underbelly Fence, this matchup is a huge reward. Do keep in mind that Shaman is exceedingly rare on the ranked ladder.

Warlock is the worst class in the Hearthstone.

Warlock hasn’t shown its face recently, but they don’t tend to have great responses for our big boys. Unless it’s Galakrond, and even then, they are limited to Dark Skies and Plague of Flames. Because of this, I would lean on your Edwin VanCleef and Questing Adventurers; just be careful not to overcommit.

Bomb Warrior is not a good matchup for Miracle Rogue. The ways we can win this matchup rely on an early Edwin VanCleef or a large Questing Adventurer taking over. Try and be careful around their removal, or pray they just don’t draw Corsair Cache.

The conclusion to Miracle Rogue

For more of Pocket Aces, be sure to join his Twitch stream, or subscribe to his new Youtube channel. Pocket Aces is part of the team Hype Horizen, check out their team website here!

Looking to learn more about card games? Check out our card game dictionary by writer Maym!