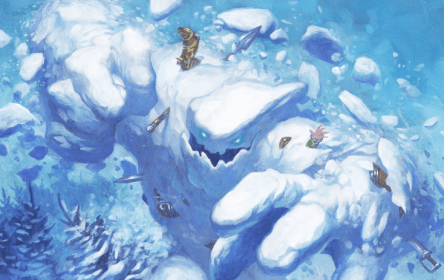 Miracle Giants Shaman is an exciting new archetype I, LaboreSangre, created revolving around the incredible card generation that is Spirit of the Frog. Spirit of the Frog was introduced in Rhastakhan’s Rumble and has mostly seen use for its heavy cycle – usually looking for enough spells for lethal in Maly Shaman, or closing out the game finding Crackle and Lava Burst burn spells in burn Shaman.

My list uses Spirit of the Frog to cycle through your deck, playing as many spells as you can. While at the same time, utilizing overloading at the right times or unlocking your overloaded mana crystals when you need to overload while negating the consequences. This setup creates a powerful turn to draw through your deck and discount your Arcane and Snowfury Giants.

Fair warning, Miracle Giant Shaman is not an easy deck to pilot. You have to be planning your draw turns and overload accordingly and have to always track hand size, so you don’t overdraw your cards. The payoff is immense; however, it’s a new archetype for Shaman that has it all: it’s a Miracle deck meaning there is the excitement of playing lots of cards in a turn drawing rampantly. It’s a combo deck, so all your effort piles into big rewards that win the game. And it has mana cheat opportunities through canceling your overload and playing zero cost 8/8 giants and will be guaranteed to catch your opponent off guard!

With Miracle Giants Shaman, you must have certain cards, no matter what. These must-have cards include Arcane Giant, Ancestral Knowledge, Lava Shock, Lightning Bloom, Loatheb, Snowfury Giant, Spirit of the Frog, Vivid Spores, and Witchwood Piper.

The rest of the Giant Shaman deck choices are full spells ranging from zero to four mana that you use to combo within the deck. While I think the cards above are optimal for the list and are practically the best runs, there is some wiggle room for those lacking some of the cards in my original list.

Why You Should Play Miracle Giants Shaman

There are many advantages to playing Miracle Giants Shaman. Utilizing Spirit of the Frog as the main draw engine is very fun to play, cycling and drawing through so many cards all at once. No one anticipates the cards the deck utilizes, so it is harder to play around an unknown/off-meta deck. Assembling the combo pieces and playing multiple Giants with a Loatheb and Vivid Spores to protect them all is immensely fun.

The deck has some flexibility in exactly which spells you run at a mana slot Spirit of the Frog can draw from, but not much. If you see many aggressive opponents, you can put in another Healing Rain instead of a Zap or run a Far Sight to draw faster instead. Torrent is a good removal card, and can definitely run another one, especially since you may play three cost spells to draw your hard to find four cost spells from your deck with the second frog you play.

The minions included in the Giant Shaman deck, however, are less up for debate. Loatheb is vital to defeating control decks, and the giants are the win-condition. Witchwood Piper draws the lowest cost minion from our deck, which guarantees Spirit of the Frog in the current build of Miracle Giants Shaman.

There are a few cards I always keep. These include Spirit of the Frog, Meat Wagon, and Witchwood Piper. If I have access to The Coin, Lightning Bloom is also worth keeping due to the option of going off early with Spirit of the Frog or some Giants.

For the more specific matchups, against Paladin, Rogue, or Druid, I try and keep Maelstrom Portal to deal with the small tokens they play early on in the game. Besides that, against Priest Loatheb is a must-have to stop their removal tools.

The Miracle Giant Shaman deck’s general strategy is to find Spirit of the Frog and get it into play, cycling a bunch of spells to draw more and discounting our Giants’ cost while it’s alive. Many of the spells we cycle help remove the board and help us speed through our deck while lessening pressure on the board. We win the game by playing heavily discounted giants with Vivid Spores to make them hard to kill, and with Loatheb to make it even harder if we have the full combo in hand.

The most common deck in discussions about the meta is Raza Priest. Since the last patch, many people have removed the anti-Darkglare techs from their Raza Priest decks, making the matchup better overall. However, Wave of Apathy is a card that makes us lose that matchup on the spot. Not sure about the overall “Who is Favored” question, but I have felt a lot better about queuing into that matchup since, before the nerf, winning was nearly impossible.

Miracle Giant Shaman does fine against aggressive decks, the hardest of which is a lucky Aggro Druid. However, it is easy to beat them much more often with another Healing Rain and or Devolve and Maelstrom Portal. I am reluctant to include Lightning Storm, but that is an option if the matchup becomes too common.

While a tool like Lightning Storm would be great against some specific decks, the card hurts our overall gameplan a lot since it crowds the three-mana spell slot, making it tougher to collect all resources we need to play the full Miracle Giant Shaman combo.

Cube Warlock is a challenging Matchup, but perhaps one of the most interesting matchups you will find on the ranked ladder. It’s all about saving Devolve to get through taunts/minimize damage and punch through their demons. Not saying a favored matchup, particularly with Voidcaller on four, Skull of the Manari on five, but it feels like an engaging boss fight.

Miracle Giants Shaman is a new archetype capable of being piloted to legend, and worth a try if you are looking for something new to pick up.