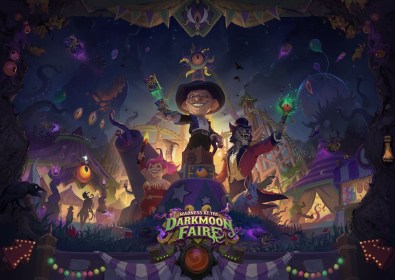 While available, the game mode Hearthstone duels is currently in early access mode until November 17th, meaning we as players only have access to a fraction of the total content at this time. A PVP spin on the dungeon run solo adventures, Duels comes with ten all-new heroes, each with exclusive new hero powers. Here is what you need to know before plotting your first duel!

Start of a Hearthstone Duel: picking your hero

Each class will eventually have its assortment of signature treasures and hero powers for you to select. Currently, there is only one hero power and one starting treasure assigned to each hero. Here are the class options we have now with some added tips:

Avoid adding too many small demons to your starting deck; this increases the consistency of Summoning Ritual. The best starting deck options for big demons are Ancient Void Hound and Hulking Overfiend.

Nature’s Gift’s spell damage mode is very powerful. Make sure to add many damaging spells to your deck to take full advantage of this hero power. Being able to ramp available mana works well with both Nature’s gifts and Warden’s Insight. The reason for this is Nature’s Gifts synergy with expensive spells. In addition to this, Warden’s Insight’s mana refresh is clearly best at ten mana. However, sometimes it’s worth considering playing Treants instead.

Deathrattle cards shine when used alongside Survival Training. Deathrattle cards like Nerubian Egg and Haunted Creeper can be powerful when combined with the many deathrattle synergy cards offered throughout the run. The hunter is very strong early in the run due to the lower health totals.

Don’t forget Wyrm Bolt works on friendly minions as well as the enemies. Cards like Tour Guide and Babbling book offer opportunities to create Mana Wyrms. Wyrm Bolting your own minions is especially important when dueling other mages because any one-toughness unit left in play will become a Mana Wyrm for the opponent.

From Golden Light works very well with minions that have divine shield, rush, or deathrattle. Be sure to add a good mix of those minions and a few legendary minions to summon with Royal Greatsword. From Golden Light will keep producing the same minion after your first minion dies but does nothing until that happens. Getting a cheap synergistic minion down early is a good plan. One minion that is common in Turalyan decks is Loot Hoarder.

While Self Sharpening Sword is not available for Rogue’s starting decks, establishing a good plan to utilize your weapon synergies is important. At this time, I believe Rogue is a tad behind the rest of the pack in terms of base power. However, utilizing Rogue’s strongest weapon-synergy tools like Cutting Class and Vulpera Toxinblade allows the class to succeed in Hearthstone Duels.

Stormforged Axe is a good way to set up an early Totemic Power. A lot of Shaman tools, including Fluctuating Totem, evolve minions, so remember that Battlecry minions are quite effective. Note when you or your opponent uses Totemic Power is used while overloaded, it generates either a Flametongue Totem, A Mana Tide Totem, or a Trick Totem in addition to the basic totem. Totem Goliath, while a non-basic totem, is not available through Totemic Power.

In my opinion, Warlock is currently the weakest class. Dark Arts works well with discard synergies; however, I find it difficult to gather enough pieces to make a consistent package. Impish Aid is actually in a similar spot, given the limited number of cheap demons and, more importantly, the lack of additional payoff for playing those cheap demons besides Impish Aid. I would also suggest using the soul fragment package for Warlock starting decks.

Rattlegore is an interesting hero, as many cards perform much better paired with a reliable source of self-damage. Cards like Rampage, Battle Rage, and Frothing Berserker are a few accessible ways to take advantage of No Guts, No Glory. Look out for ways to get Rattlegore himself into play; that card single-handedly wins games.

Players build their starting deck using the chosen class with a limit of one copy of each card. The available card sets are Classic & Basic, Curse of Naxxramas, One Night in Karazhan, and Scholomance Academy. Starting decks are 16 cards, including the one starting treasure card featured above.

Duel! Players start with 20 health each on the first duel, so be careful! Fatigue is also a very real concern, especially for slower decks that draw a lot of cards. Consider this when building your starter deck. Including a reliable win condition into your starting deck can help you get past this initial round more consistently.

Cards from throughout Hearthstone’s history comprise these buckets (unlike the starting deck), which are cultivated specifically to offer support for various strategies. Starting life totals also increase as you progress, so keep that in mind when choosing threats.

Three strikes and you are out in Hearthstone duels, identical to the 12 max wins, three max loss model from the Arena mode. We only have the free casual (normal) duels in early access, but the Heroic option will soon be released.

Players are assigned a rating specific to both formats, a Normal rating, and a separate Heroic rating. Casual duels are free entry and offer no direct rewards. Heroic duels will be exactly like Arena, with identical entry and rewards structure.

With so many different sets, treasures, hero powers, the long term future of Hearthstone Duels looks very promising. The format should always be fresh!

Big things are happening in the Tavern! I think 2020 will go down as Hearthstone’s best year to date! What do you think? Let us know in the comments below! For additional information on accessing Hearthstone Duels, check out our guide here.