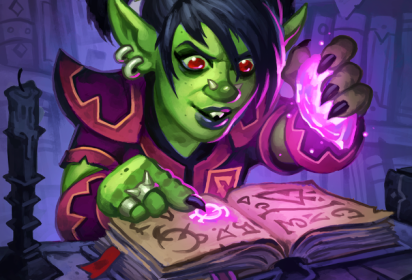 To win a Hearthstone game, you have to trade your resources for more of your opponent’s. After some number of trades, you will have some type of advantage. Imagine every game as a battle for resources. What resources you need to trade depends on the deck and style of your win-conditions. Before we can get into more complicated trading details, you have to go back to the basics.

This article is the first of our new basics series that discusses trading and many other topics in great detail. This article covers the basics of on-board trading and some of the terms involved in trading—the next two articles from SteemedMuffins build off the concepts taught here.

You can estimate card advantage by counting the number of cards on the battlefield and in hand. The player with the most has a card advantage. Deciding who has the advantage is more difficult when the decks and cards you are playing with get more complicated. Understanding card advantage in this way is a good place to start if you have never heard of the concept.

Using the same example as above, one could argue that it is better to attack face than trade here. The decision here depends on the total life of both you and your opponent. If your health is higher than your opponent’s, you have a life total advantage. The larger the separation, the bigger the advantage. If your opponent was at eight hp and you were at 30, it would make sense to attack face rather than trade. The situation would force your opponent to trade both their Bloodfen Raptors into your Yeti to survive.

In this case, the life disadvantage forces the decision despite this resulting in a card advantage for your opponent. Maintaining a life total advantage, board presence, and card advantage is a delicate balance.  The decision of what you trade depends on what style of deck you are playing, which is in part three of this series.

Notice how this does not give your opponent any card advantage. They have traded 1-for-1 with our cards. Diminishing our opponent’s board while also developing our own at a mana efficient rate is tempo. Tempo also refers to the speed of play. Tempo could be more important than card advantage based on the situation or matchup. Casting fireball to destroy our Yeti was a tempo play by our opponent. This play also saved them from an unsavory trade next turn. As a general rule of thumb, cards on the battlefield are worth more than cards in hand.

The other dimension of trading comes from the mana spent. You only get a finite amount of mana each game: one on turn one, two on turn two, and so on. If you spend your mana every turn, you will have used a total of 55 mana after turn ten and ten more every turn after.

Your opponent has an equal amount of mana to work with (with some exceptions). Being more efficient with your mana often gains a tempo advantage. In almost all my previous examples the traded mana was equal. Yeti (4 mana) for two Raptors (2 x 2 mana = 4 mana) or Yeti (4 mana) for Fireball (4 mana). The developers design Hearthstone cards to give you a specific amount of value for the mana cost. When trying this yourself, it may be tougher to squeeze out an advantage as it is more difficult than it appears.

The final and least common type of resource trade is cards in the deck. While it’s rarely relevant, it matters in matchups that last for a long time, often control vs. control. This style of deck wants to be drawing cards to establish a card advantage dominance. That takes away the resource of cards in the deck, which can, in turn, become cards until fatigue. To not lose to fatigue, balancing how many cards you draw is important. It only comes up in specific matchups, but I thought it was worth mentioning.

Being aware of what resources you have available is an important step to understanding how to trade. The next step is understanding how each card fits into each type of trade. Then we can understand each card’s value and how to evaluate cards. I will cover these concepts in part 2 of this series.