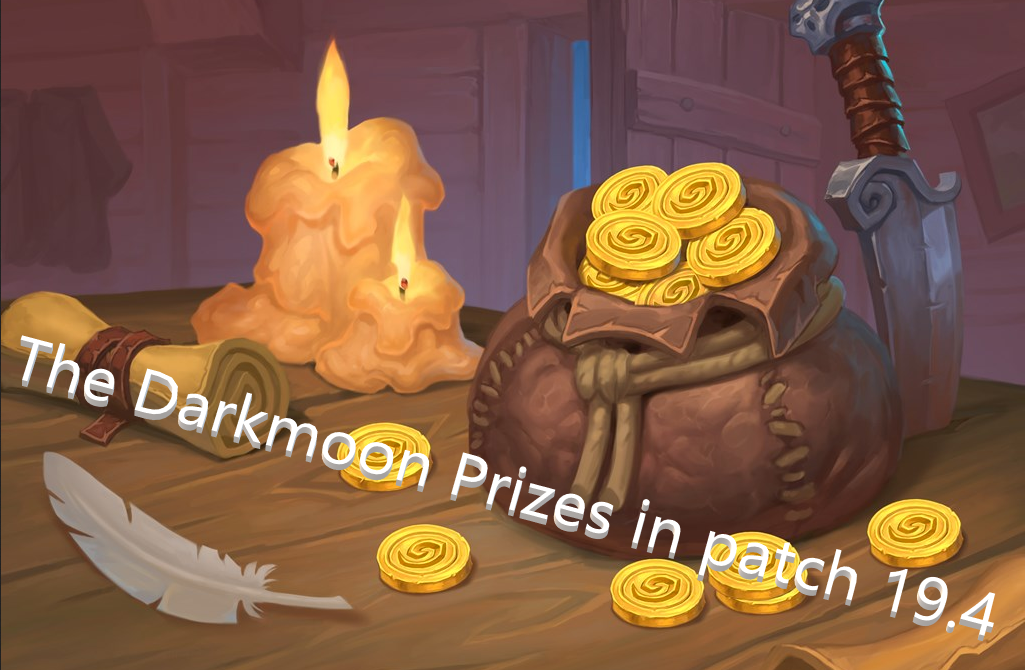 With the meta settling weeks after my last article on the Darkmoon Prizes, I decided to look over them one more time. I have changed my mind slightly, as I realized now the meta fits those who ramp and upgrade faster. Before, there was an explanation of how to use each spell and when to pick them, but now I decided to rank them on a tier list. Through a tier list, I can explain which spells are better than others.

Now, the tier list will only be Tier One and Tier Two. These are the prizes that you will see almost every game and will be the most important spells for you to pick. Let’s start with Prize Pool One.

These are the spells you usually want every game you want. Might of Stormwind can single-handedly be the reason why you win one or two more rounds. In a way, you can see Pocket Change as having a one-time Forest Warden Omu hero power. These are key spells that help you ramp fast in the game.

Gacha Gift is a flexible pick; it allows you to find triples, token generators for gold, or simply use it to fill out your board space if you plan to upgrade instead of buying minions. The only reason why Gacha Gift isn’t S-Rank is that the chance to whiff exists, which leaves you with a bad minion is common.

New Recruit is great for consistency, but in the current meta of trying to ramp to tier six and finding the best minions early, it is not as effective as one would hope. Still, it is not a bad choice since it does help you find the triples you need. You can use Rock and Rollin’ the same way. It lets you save the gold you would spend for rerolling. Like New Recruit, it gives you a chance to find cards that help you win but to a limited degree.

Seriously, do not pick Big Banana or Good Stuff. All of the other choices are much better than these two. Big Banana simply does not give enough value to be a viable choice. Good Stuff may seem to give value in the long run, but minion health tends to not matter too much at any stage of the game. Luckily, you will always have three choices, and you will find something better than these two.

S-Rank (ALMOST ALWAYS PICK THIS) – On The House

As of Patch 19.4, the current meta is defined by On The House. The spell On The House is so powerful that there isn’t even a Tier A compared to it; it’s just that amazing compared to the other spells. Being able to skip tier four and using On The House to find a tier-five minion is an incredible advantage, as you’ll be able to find your win condition or a strong minion to help you fight in the upcoming turns.

There will be times when you might miss and get a minion that does not help, but for those occasions, the other spells would not help you anyway. Usually, you’ll almost always pick On The House unless the situation is right for Brann’s Blessing or Time Tavern.

These are the average spells that fit in most situations and is usually never a terrible pick. The Bouncer is immediate stats to give you an immediate power spike, while Gruul’s Rule can overtake it in a few turns. It becomes a decision on whether you need strength now or later. “The Bouncer” can save you in the next couple of rounds and help you win those next couple of fights; it very well may be the difference you need to get through the mid-game or let you safely upgrade without too much risk. “Gruul’s Rule” is an investment and really should only be placed on a minion that can scale well off it through divine shields or cleave.

C-Rank’s spell cards you usually choose when your other choices do not fit your current situation in the game. “Great Deal” can be considered when the other choices simply don’t fit the current situation. When you do not need an immediate power spike or lack minions with any staying power, the stat buffs are sometimes unappealing.

At other times, the other offerings might be Brann’s Blessing and Time Thief without the right minions to use them. In those cases, it might just be worth picking a Great Deal treasure simply because it will at least let you squeeze in an early upgrade a few turns later – bonus points if the build needs in question to look for certain tier four minions anyway. Unlimited Coin is a spell that can do no wrong, but it’s fairly low impact compared to the other prizes. It can be a decent choice on heroes with an expensive hero power such as C’Thun or Rakanishu since they’re effectively playing with only eight gold.

Evolving Tavern is the treasure you usually choose as a high roll option. Ideally, you use it to score some early tier six minions, but that requires a quick upgrade to tier five without offering any immediate power – and in the end, it can still bust. That doesn’t mean Evolving Tavern is a terrible choice, but it’s one you ought to think carefully about before picking; you might hit the jackpot if you can shoulder the risk – or you might just die before you see the payoff.

Cards in the Situational Rank vary wildly in power depending on your circumstances; they can be the best – or worst choice, depending on what Bob offers you. If there are many tribe-relevant powerful battlecries on Bob’s board, Brann’s Blessing can result in a massive power-spike, typically Murloc or Menagerie boards. Alternatively, it can also be a great card to hold onto if you’re already planning for a big Khadgar turn later.

In the case of Time Thief, it can be an amazing choice when it catches a triple or win-condition – or amount to nothing more than a single coin when there isn’t anything worth stealing.

Closing thoughts for the Darkmoon Prizes

Remember that these are not absolutes but merely a guide that can help you out when your spell picking phase begins. You should take your time and think about what each spell does for you in your turn. The Darkmoon Prizes can very well be the reason you become the winner of your lobby, so each decision you make is very crucial. As I said, I just wanted to stick to Prize Pool One and Two since they are the most common ones and offer different tools. If people want one for Pool Three and Four, I will be happy to oblige. Until then, good luck out there, make better decisions than your opponents, and stay away from Bob’s Spicy Pretzel Mustard.

If you got any more questions, just visit my stream & I’ll be happy to chat! I hope to see you guys there. Also, make sure to follow Mewwy on Twitter! For Mewwy’s full overview of all Darkmoon Prizes, be sure to read his previous article!