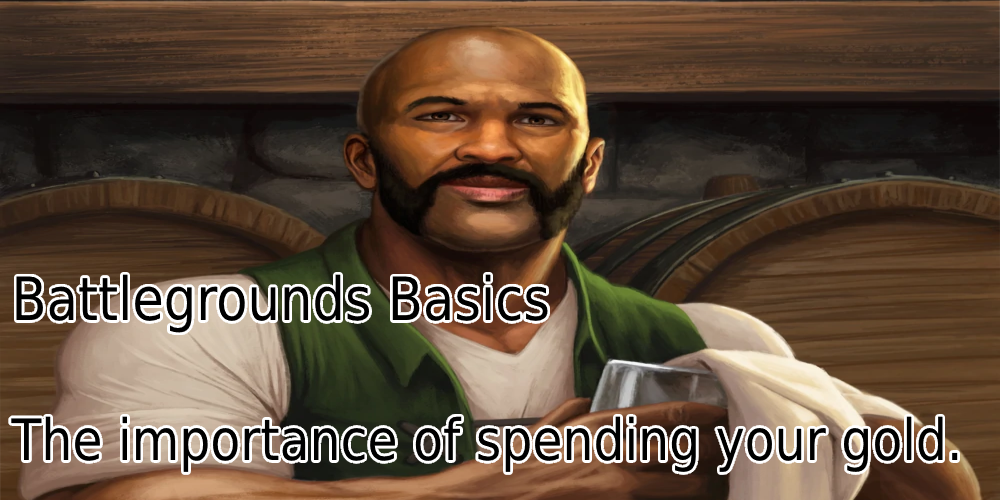 Understanding the importance of your gold usage is easily the most underestimated aspect of Battlegrounds. Every hero starts with three gold which increases each new round until ten gold. The rounds after you reach ten gold, each round you continue with ten gold to start the round. It is not currently possible to reach above ten gold. The only exception to that is the new hero Trade Prince Gallywix, which can gain more than ten starting gold.

The limited gold reduces the options you have throughout the first rounds of a Battlegrounds match. Since the randomness of Bob’s shop often only allows you to make a few but vital decisions. As you may remember from our previous guides, use your gold in a way so that you do not have to buy terrible minions. Buying terrible minions actively puts you behind in the game and limits your options of getting back into the game. Instead, consider upgrading your Tavern or using your ability instead, if that is possible.

Why wasting gold is so detrimental in the early rounds.

A great way to explain why each gold usage is so important is by looking at the total number of gold you have available. For example, in the first seven rounds of a Battlegrounds game, you have a total of 42 (3+4+5+6+7+8+9) gold available. Now, if you buy a minion you shouldn’t have, you lose ~5% of your total available gold when you sell it back at a later turn. Wasting a gold rerolling loses you ~2.5% of your total gold each time in just the rounds until you reach the ten gold mark.

A great example of why rerolling on the third turn of a game is so weak is to look at the opportunity cost. By that time, you probably only have five total gold you can freely allocate after buying something on Turn one and leveling on Turn two. Rerolling once takes up 20%!!! of your total gold allocatable gold. Similarly, that also shows the strength of Token minions in the early game. A token minion not only improves your board for turns three to five, but you also have 20% additional gold available on the first decision point for most games.

Allocating your resources in Battlegrounds

By the time you have ten gold, you need to realize how much gold you can use and where you plan to spend your resources. At first, you may be buying any strong minion you see to be strong, but eventually, you have to create a composition. You have a game plan going, and you have some reasonable units on your Warband; what now?

Do you use your hero power? Do you reroll? If you have three gold left, should you buy a unit that helps you now, or is there something you can find to improve your chances in the later rounds? A great example of that is when you have the option to buy units like Freedealing Gambler, which sells for three gold, or Unstable Ghoul to help you counter a Divine Shield Warband in later rounds. Both of those options sound tempting, but if you are about to take a massive loss, or if you still have a weak minion on your Warband, you might need to focus on NOW instead of later.

Let’s take a look at how that would play out in the mid-game of a Battlegrounds match.

For example, you have a Groundshaker build with a mixture of Quilboar and Mechs. You got five more gold available, and you are looking for your third Banner Boar for a triple. Bob’s Shop includes three cards that do not help you, alongside a Menagerie Cup and a Deflect-o-Bot. Obviously, you want a Deflect-o-Bot since a Divine Shield minion helps your Warband. But you can also buy the Menagerie Cup, sell it, and buy the Deflect-o-Bot. It’s a small +1/+1 buff to two units, but it could help be the difference in your next win.

That decision doesn’t have a right or wrong answer since both sides have arguments in their favor. That is possible in a game like Battlegrounds, where you have incomplete information. If you don’t feel the extra buffs are worthwhile, you can pursue other options by rerolling. A great way to improve after the round would be to think back and consider what other buffs you would pick up and what factors impacted your decision in the moment.

As a different example, if you sell one of your off-composition or non-scaling units for a buff card such as Houndmaster or Screwjank Clunker, was it worth it for a single +2/+2 and a mediocre body? If you bought Brann Bronzebeard in hopes of using him as a win condition. How many battlecries do you expect to use, and how many do you need to find to justify the spend resources and the reduced strength of your Warband. All of that comes back to understanding what cards you want and how you allocate your resources. Remember that gold isn’t infinite, so these decisions have consequences long after you make the decision.