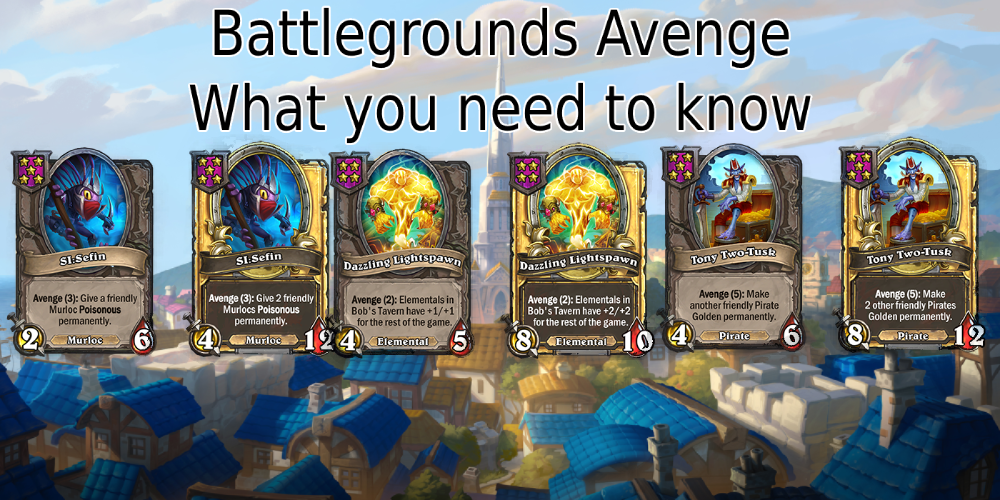 What is Battlegrounds’ new keyword Avenge?

The Avenge keyword effect triggers after certain numbers of – Friendly – units die on your side of the board. These effects so far include temporary and permanent stat buffs, adding cards to your hand, upgrading units to golden rarity, and permanent tribe buffs. One of the unique things about Avenge is that you can trigger each Avenge effect multiple times. But not only that, each effect can trigger multiple times – EACH TURN!

While the initial blog wasn’t quite clear about that, the writer of the blog, Nicholas “Decktech” Weiss, confirmed the fact on Twitter shortly after.

What minions use Avenge?

There are several minions with the Avenge keyword, with various levels of strength. Some of the best-looking units include SI:Sefin, the new T5 Murloc. Tony Two-Tusk, the new T5 Pirate. And Dazzling Lightspawn, a T4 version of Nomi for the Elemental Tribe. Since many tribes receive an Avenge Keyword user, it is going to be interesting to see how the meta develops around their potential.

Something Battlegrounds expert Mewwy noted when we first saw the new keyword was its potential with early-game cards like Acolyte of C’thun and Scallywag. The extra bodies help trigger Avenge at every stage of the game, synergizing with many of the frequent activating Avenge units like Bird Body or Impatient Demonsayer.

We are working on updating all previous guides to become up to date with the new Battlegrounds update. For now, we hope you all enjoy the new update, and all the support Battlegrounds is receiving from the developers. For more, read all about our latest guides to Battlegrounds’ curves, and our recent Basics article covering the important terms you need to know.