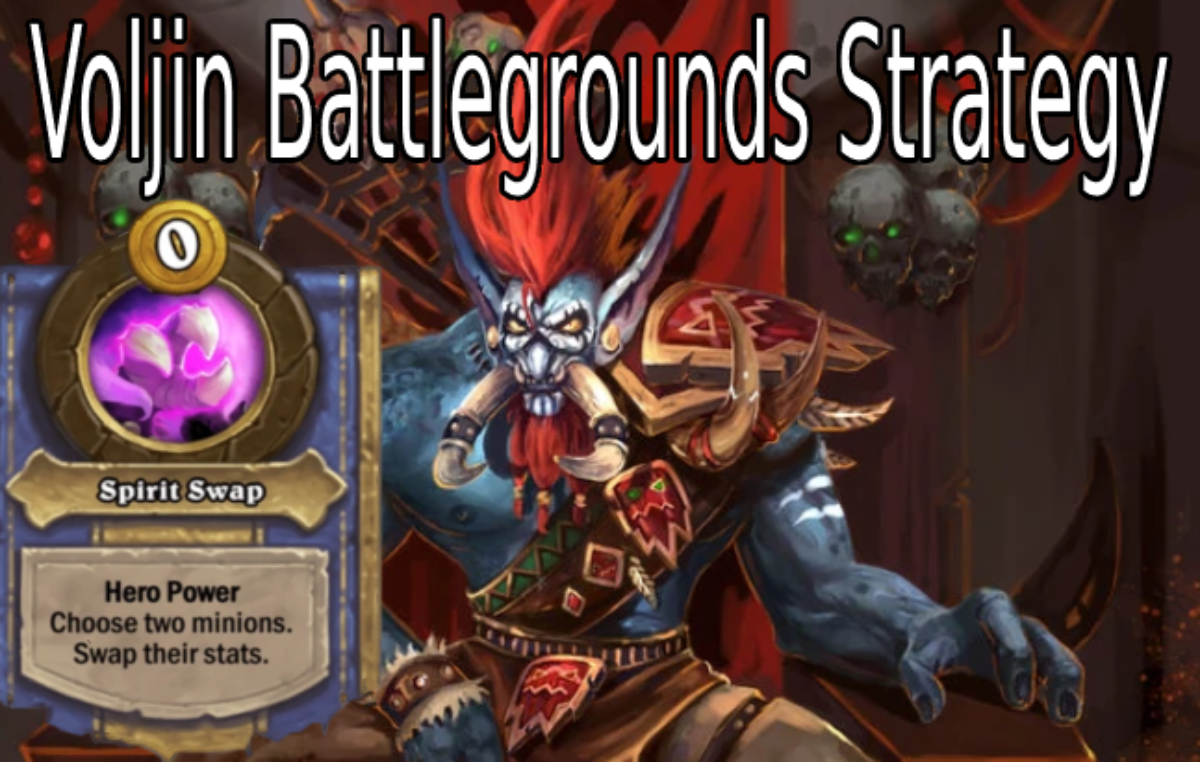 Battlegrounds Patch 20.2 introduced the Quilboar tribe to the game. Alongside the new tribe, three new heroes joined the Battlegrounds hero pool. Previously we have covered Xyrella and Guff Runetotem, which leaves the final of the trio, Vol’Jin. Vol’jin is gaining a lot of strength as people learn more about all that is possible with Spirit Swap.

The basics of Vol’Jin in Battlegrounds

Vol’jins’ basic goal is to give the highest stats to the minion that uses it best. Commonly, the minions that use the stats best are those with Divine Shield, Cleave, or both. Examples include Cave Hydra, Deflect-o-Bot, Annoy-o-Module, Bronzewarden, Crackling Cyclone, or Foe Reaper 4000. The most efficient way to use Vol’Jins ability, Spirit Swap, is by utilizing expendable units with buffs or self-growing abilities.

Great examples of this are the units Saurolisk and Wrath Weaver in the early game. Often when you pick these up in the early rounds, you end up not committing to either a Deathrattle or Demon Warband. Most heroes simply have to give up on these units to look for a better path towards victory. However, Vol’Jin can utilize these later in the game by transferring the stats you built since the start of the game to a unit that utilizes it best, like a Cave Hydra from Tavern four.

Another clever way to use Vol’Jins’ ability is by abusing “aura buffs.” Minions such as Murloc Warleader, Old-Murk Eye, and Southsea Captain have these aura buffs. If you swap two Southsea Captain’s stats with one another, they will both gain +1/+1 in stats. The buff happens because the aura-buffed stats become the minion’s new base stats when swapped before reapplying the aura. While small, it is effective in creating two scaling units. They will be able to fight better, and eventually, you can swap their stats onto other minions.

Vol’jin’s Path to the Mid Game

On the way to the mid-game, you need to be aware of how your hero power benefits you at the moment. Choose utility minions such as Refreshing Anomaly or Micro Mummy and swap their stats with something bigger from Bob’s Board, like a Vulgar Homunculus or Dragonspawn Lieutenant. For Refreshing Anomaly, you can use its refresh at turn three if Bob’s shop is terrible and swapping its stats for a better minion. Of course, like every hero, you still want to pick token generators but keep this in mind if you don’t have that option.

A simple curve for Vol’Jin

Turn 3 (5 Gold) – Normally, the shop has minions with 3/3 stat lines. Instead of buying those minions, it is more beneficial to hero power their stats onto your weaker Tavern-Tier one minion if that minion has a special effect. For example, if you bought a Red Whelp and Bob has a Metaltooth Leaper, it is better to swap their stats. If you choose this path, you should end the turn with 2-3 minions.

Turn 4 (6 Gold) – Buy two minions, keep your hero in mind on which minion you should swap.

Turn 6 (8 Gold) – You got two options here. The standard is staying at Tavern-tier three and creating a strong board filled with Tavern-tier Three units. I would suggest this if you are losing or if Bob is offering an amazing board of tier 3’s in your first roll.

Your other option is to upgrade immediately into Tavern-tier Four. You have a free reroll and could find strong Tavern-Four units to swap stats onto or take their stats for one of your other units. Cards like Herald of the Flame, Savannah Highmane, Bonker, or Ring Matron are great options to swap. While you do not have their effects, the minion you swapped with will be better in combat. Because of the extra stats that you generate, you can upgrade your Tavern safer than many of Battlegrounds’ heroes.

At turn three, while you can choose to buy or keep two or three minions, there is another option in upgrading to Tavern-Tier three. Due to Vol’jin’s hero power, Spirit Swap, you can more consistently upgrade to Tavern-Three early if the shop isn’t particularly strong. If you have a token generator, you can swap their stats and mitigate some damage if your opponent did not also upgrade early with you. Then, you can swap that token’s stats with a tier-three minion on the following turn. Then you can buy two other minions. It will be as if you have three tier-three minions. Of course, this is still a risky play, but it is an option nonetheless.

Turn 5 (7 Gold) – The first option here is to buy two more units. However, you can also reroll for better units or upgrade to the next Tavern tier. If you choose to upgrade, you can use the extra gold to reroll and swap stats.

Turn 6 (8 Gold) – If you did not choose to upgrade early, you normally upgrade now and buy one last minion. If you have been losing and need to find stronger minions, stay on this tier and buy them.

From here, you start buying minions at Tavern-tier four and start trying to find your win condition and game plan.

Vol’jin’s game plan revolves around using the swapping effect of his hero power to create uniquely powerful board states throughout all stages of the game.

You can typically divide minions in Battlegrounds into two categories: they either have strong effects or strong stats, but rarely both, and this dichotomy is what defines Vol’jin’s general gameplan. An Alleycat is typically a very weak combat minion only purchased for its positive effect on your gold economy in the early game. Swapping the stats on the weak 1/1 cat onto a minion with higher stats, Vol’jin can have the best of both worlds.

Vol’jin can be uniquely greedy with his minion choices. Holding onto two Murloc Tidehunters might normally be a move that compromises your battle strength, but swapping the weak stat lines with stronger Tier 2 minions means you can get away with keeping them for a little bit longer for the potential triple. Combat effects are also a great choice for swap targets – minions like Menagerie Cup or Kindly Grandmother can have their downsides all but negated through clever swapping.

The mid-game is when you start seeing minions with much more powerful combat effects that become Vol’jin’s primary focus. The earlier tiers have minions like Kaboom Bot, whose effects tend to fall off as the game goes on. Tavern-Tier three and four are where players start seeing Divine shields and Cleaves that remain relevant throughout the game. At this point, you typically want to take the highest stat lines you can find and swap them into minions with these effects, as they generally have low stats to start.

For another hero, minions like Rabid Saurolisk can be awkward after the early game; the high stats make it a difficult minion to sell without opening your Warband up to a moment of weakness, but at the same time, it’s a minion that likely won’t last into the late game as you buy fewer and fewer deathrattles. Vol’jin can circumvent this issue, swapping something like a 7/10 statline onto a Bolvar, resulting in a huge mid-game power spike. Even if you don’t have high stats on your board to abuse, simply throwing a 5/4 statline from a Crystalweaver on Bob’s board onto a 2/1 Bronze Warden can be a very strong move. Scaling minions like Bristleback Brute are good picks if you can enable their effects, as the massive statlines they can amass are great swap targets.

As you start working towards your win condition, Vol’jin’s hero power becomes an excellent transition tool in the endgame. At times, it can be difficult to safely start a build even after you’ve discovered your win condition; cards like Kalecgos or Nomi are quite weak in combat strength when you first pick them up. Vol’jin can mitigate this issue by swapping the statlines of his mid-game minions onto tribe-relevant endgame minions, making a safe transition to a winning composition to close out the game.

How Vol’Jin finds a use with every tribe in Battlegrounds

Vol’jin’s hero power is incredibly versatile, and he doesn’t specialize in any particular tribe, as there are ways for him to take advantage of his ability in every composition. Here are a few helpful ways to utilize Spirit Swap for all Tribes currently available in Battlegrounds

Mech:
Minions buffed from Micro Mummy or Iron-Sensei are key cards on which to use Spirit Swap. Since many mech cards are weak early on but have strong effects, finding cards like Herald of the Flame is effective to hero power get a nice spike in power.

Pirates:
Minions buffed from Southsea Captain or Bloodsail Cannoneer are other good cards to hero power. Hero powering two Southsea Captains together will give each +1/+1 every time you do so. If you created a powerful Salty Looter in the early-midgame, then you can transfer its stats onto a better minion.

Murlocs:
Aura buffs from Old-Murk Eye and Murloc Warleader can be used to hero power high attack stats onto better minions. If you hero power two Old-Murk Eye’s onto one another, they will gain additional attack each time.

Beast:
Hero power minions buffed from Mama Bear or Pack Leader if you want to transition out of Beast. An early Rabid Saurolisk that you made strong is also a great card to hero power.

Dragons:
Bronze Warden is a powerful minion with weak stats; giving it extra stats from stronger minions in the shop will be extra effective. If you find Kalecgos and want to transition into this build, you can use hero power to be strong while finding Battlecries. Nadina sometimes does not die as some players will try to counter her with weak taunts. Use hero power to make Nadina get fewer stats so you can guarantee the deathrattle.

Demons:
If you got Wrath Weaver in the early game and need to change builds, he is an amazing card to hero power onto another minion. Later in the game, Annihilan Battlemaster can be a great comeback card to put its stats onto a divine shield or a poison minion.

When doing Nomi build, you should use your hero power to make Nomi, Kitchen Nightmare, less of a liability by giving it stats from one of the elementals you cycle through. On the way to working towards this build, you can also hero power the big stats onto divine shield minions.

Throughout the game, you may put a lot of your Blood Gems onto one Quilboar. Utilizing Spirit Swap with Blood Gems is great since you generally have to sell the minion you use Blood Gems on early in a game. There is an exploit Vol’jin can do with Necrolyte, where you can double dip on the stats of a minion with Blood Gems put onto it.

Step 1. Pile Blood Gems on a minion (For example, 10 Blood Gems)
Step 2. Swap their stats with another minion with Hero Power.
Step 3. Play Necrolyte, use her with the minion adjacent to that minion with Blood Gem.

For more of Mewwy’s Battlegrounds content, follow on Twitch, Twitter, or join our discord! Are you looking for something different? Why not read all about the up-and-coming hero Xyrella.