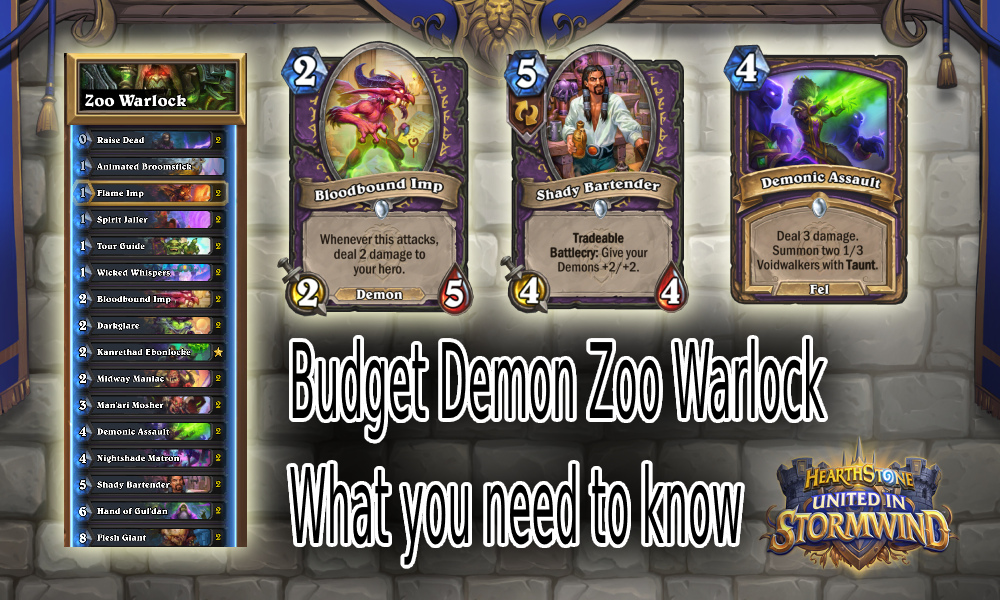 The cost of most competitive Hearthstone decks is a big turn-off from continuing to play the game. As such, many of the most popular decks are made to work on a budget. However, your budget doesn’t have to stop you from reaching your rank goals in Hearthstone. One deck that stands the test of time is Zoo Warlock, which returns with a new build in nearly every Hearthstone expansion, including in the United in Stormwind.

Demon Zoo Warlock’s success comes, in part, from the legendary card Kanrethad Ebonlocke. However, the card is replaceable, and the budget version of the deck can reach the Diamond or even Legend ranks. Especially now, in the United in Stormwind standard format. Two options to replace Kanrethad Ebonlocke are Imprisoned Scrap Imp or Soul Shear.

The basics of Demon Zoo Warlock

There isn’t a lot you need to understand before queuing up a game of Demon Zoo Warlock. As with many tempo-oriented decks, play to control the board. While being aware of the ways your opponent can clear your units. In your mulligan, the most important card for the complete list is Kanrethad Ebonlocke. Besides him, Demons and other units you can play early in the game are ideal. For the budget version, pick cards that build tempo instead. Imprisoned Scrap Imp is a great early choice. Flame Imp remains one of the best turn-one cards in the game, and in addition Tour Guide is a solid backup plan.

The list only plays a single Animated Broomstick due to the way most games of Demon Zoo Warlock play out. The most common situation you benefit from the card is during your Kanrethad Ebonlocke turn later in the game. Besides that, most of your game plan relies on controlling the board and building on top of your foundation each turn onwards.

If Demon Zoo Warlock continues to perform we’ll create a more in-depth strategy guide for the archetype as the team is positive about its path forward. Especially if the Warlock Quest receives a nerf many are predicting, the Demon Zoo Warlock deck (is expected to*) improves significantly.

For more United in Stormwind Hearthstone content, be sure to read our latest guide covering the new Elemental Shaman, Quest Darkglare Warlock, and Wild Tax Paladin! For those more interested in Battlegrounds, be sure to take a look at our new cheat sheets for Curves, Compositions, and Heroes!