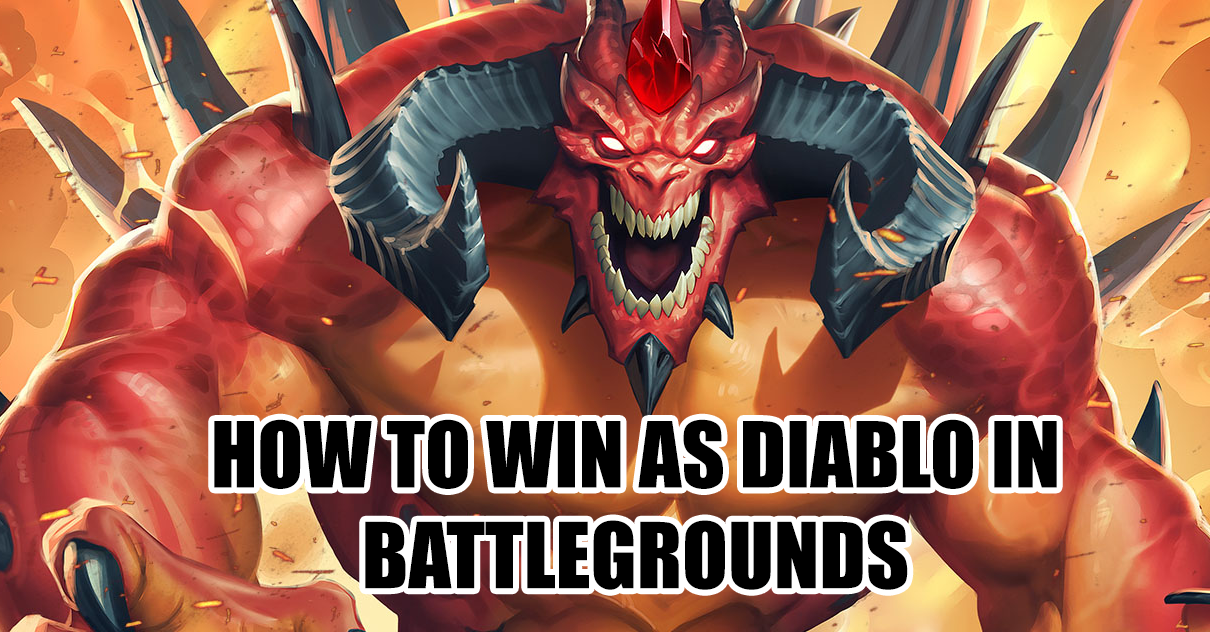 Diablo, the Lord Terror, is the first-ever crossover character for Battlegrounds. With the new hero being the centerpiece for the Battlegrounds Diablo event of 21.6 and 21.8 updates. After receiving a quick hotfix, Diablo is now a fearsome hero of which everyone should be wary. Let’s break down what makes Diablo so powerful and what strategies are available for you when you get the chance to play him.

Basics of Diablo, the Lord of Terror in Battlegrounds

Diablo’s Hero power, Realm of Terror, forces each player to face Diablo every four turns. At those turns, you gain the minion Lord of Terror (stats 5/5 at turn four, 10/10 at turn eight, 20/20 at turn twelve, and 40/40 every 4th round after.) The Lord of Terror has the Deathrattle effect of giving your opponent one of these treasures.

However, whenever your Lord of Terror survives a combat round, you gain a treasure for each battle, allowing to collect up to 10 different treasures with seven difference effects every 4th round. Naturally, it is in your best interest to be the strongest as possible during these turns. Diablo is a tempo-heavy hero, so while his hero power does not help you find value or triples like others, he can use his natural strength to achieve victory.

A quick overview of Diablo’s Treasures

Diablo has a large range of treasures, which frequently change throughout the Battlegrounds updates. For example, in the 21.8 Hearthstone update, several treasures, the Sigil of Hell, Claws of Terror, and Hellfire Hooves, got significant buffs.

Below you can find a detailed breakdown of the five possible treasures which improve at turn eight, twelve, and sixteen.

Give a friendly minion Windfury/Reborn/Divine Shield/Windfury, Reborn, and Divine Shield.

Your first goal is to make your Turn four Warband the strongest possible. Being strong for your 4th turn maximizes the number of treasures you collect and deals the most damage to your opponents. Besides the spell secret that summons random demons, you should try to hold onto your treasures for your next All vs. Diablo round. Once Turn eight starts, use up all your treasures and build the strongest possible Warband.

Since Diablo’s Treasures only grant a buff for a single round, it’s ideal to use them when you have the most to gain. By maximizing your chances of winning the eighth round, you get the most treasures going forward and potentially cripple your opponents going forward.

Of course, there are going to be situations where you need to survive “now.” You might be facing an opponent with all the triples in the world, or you may already be at a lower life total, don’t hesitate to use your resources here, as they aren’t of any use when you are dead. After the eighth turn, you can choose when to use your treasures more freely. Whether you want them for the 12th round or if you want them as a safety net for when you upgrade to T5 or T6 depends a lot on the game, but all are viable options.

During turn eight, it might even be a good idea to focus more on a tempo heavy build rather than an end game one so that you can deal maximum damage possible to the entire lobby.

As we have established, your first goal is to make your Turn four as strong as possible. Three curves allow you to do this well: the Standard Curve, the Warrior or Shinese Curve, and the 3-on-3 Curve. The first two options give you a consistently strong Warband, with the third option relying on some luck to jump ahead of your competition.

When you find yourself with a good number of treasures of your Turn four battle, upgrading towards Tavern Four as early as turn six (8g) becomes an option. The “standard” curve (despite no longer being the standard) is the easiest way to play Battlegrounds, which most people are familiar with. There aren’t any tricks; you just play the game and hope to find a way to stabilize at Tavern-Tier four to look for a game plan.

The Warrior or Shinese Battlegrounds Curve

The Warrior curve allows you to still have a strong board at Turn four, especially if you focus on the strong Tavern-Tier one minions. Cards like Acolyte of C’Thun, Micro Mummy, and Pupbot can fight just as well as most Tavern-Tier two minions. Since you are staying at Tavern-Tier one for so long, you can find pairs and even prepare triples for the next rounds. Be sure to take advantage of this and triple for a Tavern-Tier four minion at Turn six or multiple Tavern-Tier five minions at Turn seven if you are freezing for multiple triples.

The 3-on-3 Curve for Battlegrounds

Turn one (3g) – Buy best Tavern-Tier one Minion. Preferably a token generator. If you choose Deck Swabbie, hold onto it and play it for the next turn instead.
Turn two (4g) – Upgrade to T2. If you chose Deck Swabbie, play him now. (Or hold onto him if you are fighting an Arch-Villain Rafaam.)
Turn three (5g) -Sell your minion or token. Upgrade to T3. If you chose Deck Swabbie, you do not need to sell him as the cost for upgrading should be five gold.
Turn four (6g) – Buy the two best minions. Turn four is your hero power turn. Hopefully, you have two good minions that will lead you to a victory. A tie is also not a bad outcome, but not ideal.

The 3-on-3 curve allows you to go to Tavern-Tier three early safely but does not give you a good chance at earning treasures. If you are lucky to find two strong Tavern-Tier three minions, you will be in a good spot; otherwise, it is risky.

Closing Thoughts for Diablo, the Lord of Terror

Diablo is one of the most exciting heroes to play right now as he drastically changes the way people play Battlegrounds. His treasures can lead to interesting builds such as putting divine shield or reborn on minions with poison or a key minion that needs protection like Baron Rivendare or Mama Bear. However, Baron Rivendare and Monstrous Macaw have anti-synergy with Lord of Terror as they could proc his death rattle ability an extra time, giving your opponents more treasures.

After the turns you face the entire lobby, be sure to gauge your opponent’s strength to your advantage. If they defeated you the previous turn, maybe you should invest in some spells. Take note that the secret spell that Black Soulstone and Sigil from Hell do not stack and can only play one at a time. If you need that extra power and have multiple of them, feel free to put one in play.

For more of Mewwy’s Battlegrounds content, follow on Twitch, Twitter, or join our discord! Also be sure to read Mewwy’s previous guide, covering all you need to know for Fungalmancer Flurgl, and Sneed!