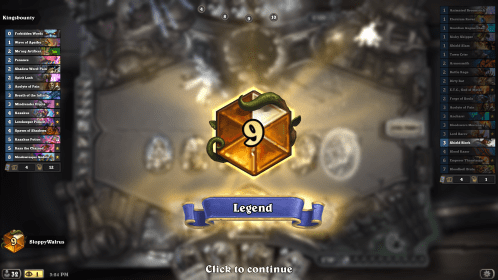 Hello everyone, my name is Sloppy Walrus, and I love innovating new decks in Hearthstone.
Often I just end up making meme decks that are bad but fun, but this time around, I ended up making a really solid deck that has a lot of potential when piloted correctly.
I present to you a deck I like to call ETC OTK Warrior for the Wild format.

The Basics of ETC OTK Warrior

ETC OTK Warrior’s core focuses on drawing through your entire deck and gaining as much armor as possible while searching for your combo. Through cards like Risky Skipper, alongside Battle Rage, and all the other forms of card draw, the deck gains a lot of consistency. In addition to that, Forge of Souls and Ancharrr assist you in finding Risky Skipper consistently.

How to set up the kill

The finisher combo requires at minimum a set of four to five cards, though the more tools you have access to, the more damage you can do. Setting up the E.T.C. OTK Warrior relies on is as follows:

Following this combo, a maximum of 42 damage is possible if enough targets are available to attack. Through the inclusion of Emperor Thaurissan, it is possible to combo a second Animated Broomstick alongside more minions for an additional up to 24 damage if enough targets exist. The combination leads to 66 maximum damage to the enemy hero. The higher damage combo is important to remember in matchups against decks like Druid or Warrior, who generate a large amount of armor.

Alternatively, if you only have one Bloodsworn Mercenary, the maximum damage you can deal with one Animated Broomstick is 28 damage, assuming you have seven minions that can attack.

One reason for ETC OTK Warrior’s initial success is that people haven’t quite figured out how to play against the deck. Like the old Mecha’thun decks, ETC OTK Warrior can simply lose to itself if the opponent never played cards. However, one way to counter this problem for ETC OTK Warrior is through the card Cornered Sentry. Playing a card that forcibly generates minions for you to attack into takes away at least some of the counterplay strategy’s effectiveness.

On the other hand, a card like Dirty Rat fits a similar role as Cornered Sentry. The Dirty rat has additional uses against decks like Malygos Druid & Reno Priest. However, the advantage against the other combo decks comes at the cost of significantly hurting your matchup against decks like Big Priest and the occasional Big Shaman.

In some pocket meta’s, where you find yourself facing many Druids or Warriors that gain a lot of armor Brann Bronzebeard could be a good inclusion. Brann Bronzebeard can add a tremendous amount of damage to the combo, with a total of five copies of E.T.C on the board, every rush attack deals ten damage. That, combined with two Animated Broomsticks, pushes through your opponent’s armor.

One thing to note is that Brann Bronzebeard often feels like a brick draw in other matchups, so that’s why I would only recommend it in certain matchups. Since outputting this much damage is unnecessary in most games.

There are several cards that we always prioritize in our mulligan for the Wild ETC OTK Warrior deck. Risky Skipper and Battle Rage are by far the most important tools for our deck. Besides that, Forge of Souls is a great option to hold onto when you don’t have Ancharrr in your starting hand yet.

Against control decks, on the other hand, our drawing options are far more important. Because of this, cards like Bloodsworn Mercenary, Armorsmith, and Bloodboil Brutes are fine to pass up; eventually, you will find your board clears for potential threats.

As I mentioned before, all you want to do is draw as many cards as possible while gaining armor to survive. While the combo doesn’t require Emperor Thaurissan, it does make it far easier to pull off. In addition to that, holding your second Animated Broomstick is often important to add a lot of damage to your combo against classes with the potential to gain armor.

It is rarely correct to use your one-drops in the early game because of the potential to combo them with Risky Skipper, Armorsmith, and Battle Rage. However, in some situations, it may be required to play one earlier in the game to guarantee you can survive longer.

However, you should try and avoid doing so as much as possible. When you have a Risky Skipper ready to go, it is nearly always better to simply save them until you pull off a strong board clear & cycle turn. It’s smart to calculate how much mana you need in advance, so you know when to Risky Skipper and Battle Rage; this is crucial to find the optimal turn to do it.

Raza Priest is one of the trickier matchups for ETC OTK Warrior. The reason is that Priest similar to you has an option to kill you through their OTK turn. Because of that, the ability to gain armor alongside your draws is vital to surviving long enough to close out the game. As we mentioned before, your opponents need minions on the board for you to pull off the E.T.C. God of Metal combo. Here is where the armor we gained previously comes in, which grants us the time we need to survive.

Assuming two Bloodsworn Mercenaries, we need five attacks to pull off an OTK. The five attacks require at minimum five health worth of minions on your opponent’s side of things. Five health allows you to attack in four one-attack minions, with the fifth attack closing out the match. Often Reno Priest finds some armor through Shadowreaper Anduin, so you might need more than five attacks to find lethal.

One card that comes in handy is Dirty Rat, like I mentioned earlier. Whether it is through pulling a Raza, Unchained, or Lorekeeper Polkelt to disrupt their strategy, or pulling a minion when you go for lethal significantly improves the matchup overall for the ETC OTK Warrior side of things.

For more unique Hearthstone decks, be sure to take a look at our recent Wild Streamer deck collection by Gerben!
Do you want to have your deck featured or work with AceGameGuides on creating strategic content? Email Arend@AceGameGuides.com, and we’ll talk! For more of AceGameGuides, be sure to join the new discord!