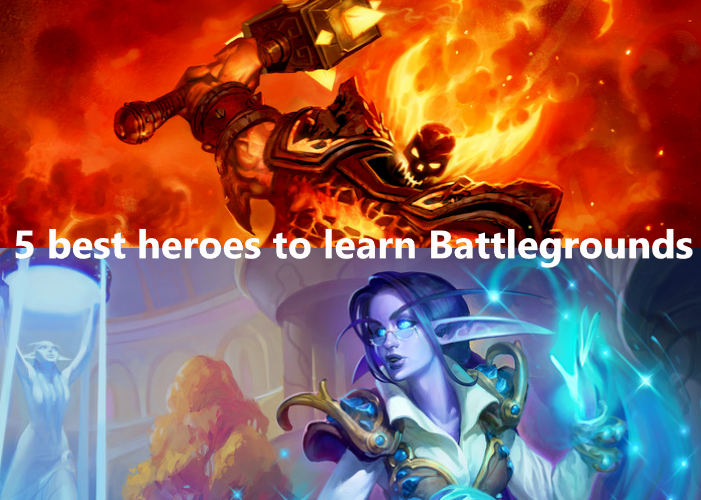 The number of heroes in Battlegrounds is quite overwhelming for new players. Because of that, I’ve selected five strong heroes for the current Battlegrounds meta, with simple to understand strategies and how to play them. The heroes include Al’Akir, Ragnaros, the Firelord, Forest Warden Omu, the Lich King, and Kael’thas Sunstrider.

The simple-to-follow strategies for these heroes allow you to focus on other aspects of Battlegrounds instead, which is highly beneficial due to the limited time available in each turn.

Al’Akir the hero to learn the basics of attacking order.

Al’Akir is a perfect hero if you just started to play the game. Al’Akir’s hero power, Swatting Insects, gives your left-most unit divine shield, taunt, and windfury. With Swatting Insects, you win most early fights, allowing you not to lose much health early on. That allows you more room for error in the late-game stages of the game while you continue learning.

When you are playing Al’Akir, it matters a lot which minion you put first because of your ability, Swatting Insects. Several different strategies matter at various points in the battlegrounds match. For example, in the early game, a minion like Spawn of N’zoth drastically improves your winrate by giving it taunt and guaranteeing it dies first.

You should try and avoid Mech’s, when possible as Al’Akir, due to the anti-synergy with Deflect-o-Bot, which Mech comps often want to place as the first minion to attack.

Forest Warden Omu and Elise Starseeker share a similar playstyle. Like Elise, before the 19.6 patch Omu aims to raise its tavern at almost every opportunity. However, Omu’s curve is slightly different from old Elise as you need an additional gold to buy a minion after raising your tavern. Forest Warden Omu is still strong in the current meta, as he can raise his tavern while expanding his board, which not many other heroes can do in Battlegrounds.

I would say Forest Warden Omu is currently in the top five strongest heroes in Battlegrounds and is honestly quite straightforward to play, even for new players. However, Omu requires you to find a Deck Swabbie or a token minion to play its ideal curve. If you do, follow the curve below.

Now, you are at tavern five, at turn seven. Ideally, you maintain a fairly healthy life total. The spot you are in now should be a great spot to look for a win-condition from, stabilize the game further, and try to win the game.

If you happen to not find a token or Deck Swabbie on turn one, simply delay your curve by a turn by staying on tier one for an extra turn.

Ragnaros the Firelord, the simplest, yet powerful hero in Battlegrounds

Ragnaros is as straightforward as it gets. Ragnaros the Firelord’s hero power buffs +3/+3 to your far left and far right minion. Seems pretty easy, right? That might be the case, but you need to make sure you have the right minions and enough health to hold until those minions scale.

Ragnaros performs best when Mechs and Beasts are in the game because of Deflect-o-bot and Cave Hydra’s strength and how they synergize with the available stat-buffs.

How do you play Ragnaros the Firelord?

The early game is the most crucial part. You level up with the normal leveling curve, and if you are still unfamiliar with it, you can take a look here, how to win at hearthstone battlegrounds,

And you need to make sure you are the strongest you can be in the early game. Don’t try to power level, don’t be afraid to triple into four-drops, do whatever you can to win those early fights so you can complete your quest fast. That is the key.

After getting to tier three, you need to find the units you want to buff; Deflect-o-Bot is the best because it is a divine shield unit that resets its Divine Shield with certain deathrattles. Other divine shield minions are also worthwhile, but they are of lesser value overall.

A big problem with Ragnaros the Firelord, however, is that a bad early start is devastating. Sometimes you just don’t find minions strong enough to survive the early stages, and you lose fast.

The basics of Lich King, and how to utilize Reborn Rites

The Lich King is a great hero to learn the game. His ability, Reborn Rites, is simply great in almost every situation. In addition to that, several strategies are empowered by Reborn Rites in the right situations, as players get more familiar with Lich King and the Battlegrounds game mode.

Reborn Rites shines in the early game with the Lich King by simply giving you an extra minion for the first fights. The extra minion gives you a great lead against most other heroes in Battlegrounds in the initial few rounds. In addition to that, Reborn Rites synergizes well with common, powerful deathrattle minions you are picking up regardless, like Kaboom Bot, Harvest Golem, Imprisoner, and Spawn of N’zoth.

Since several of our best early-minions are part of the Mech tribe, it’s recommended you pick Lich King in situations where Mechs and Beasts are in the available minion pool. Why beasts, you ask? Beasts synergize uniquely well because of how our hero power, Reborn Rites, synergizes in the late-game with the beast Goldrinn, the Great Wolf. For more of the Goldrinn & The Lich King build, you can read our guide covering the strategy!

Kael’thas Sunstrider allows you to focus on other aspects while learning Battlegrounds.

The final beginner-friendly hero is Kael’thas Sunstrider and its ability, Verdant Spheres. Verdant Spheres grants the third minion you purchase a +2/+2 buff. Simple as that. Kael’thas is by no means the strongest hero in Battlegrounds, but Verdant Spheres is consistent. You can focus your attention on the other aspects of the battlegrounds game while securing at least a decent early-game phase because of Verdant Spheres’ nature.

If you are looking for new ways to improve, I want to take this opportunity to invite you to Tenacity’s Educational BG Community discord, with guides, tons of people to spectate and tutor you – all for free!
For more of Tenacity191, check his educational streams on twitch and his youtube channel, where you can find more content about how to get better at hearthstone battlegrounds.