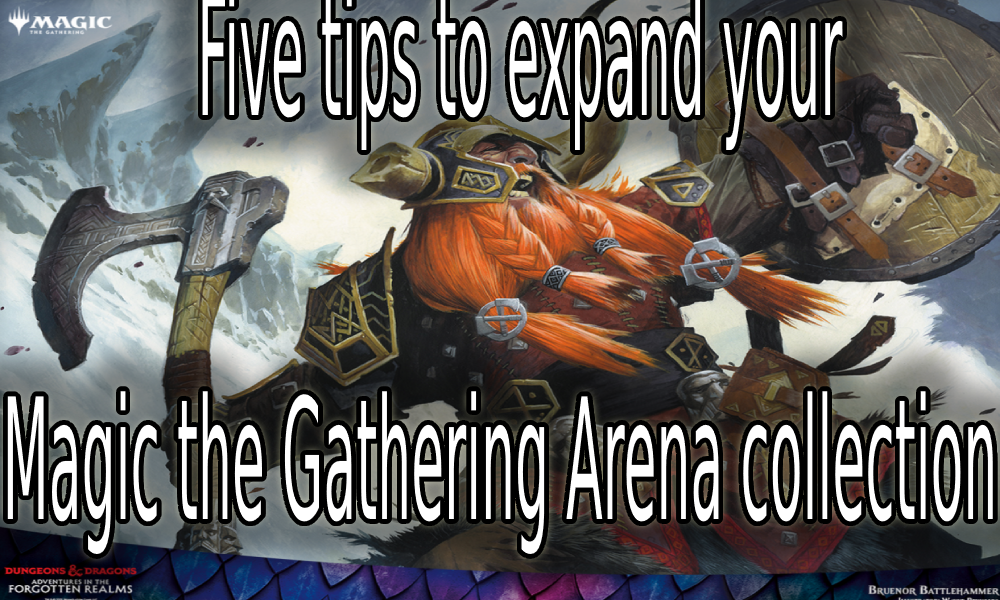 As a card gamer, there are a few things that bother me more than they should. Foremost would have to be losing out on value; perhaps you know the feeling. I cannot stand the thought if I had done this all differently, I would’ve gotten more value. Magic the Gathering: Arena has a ton of different ways to put players into this position. Many items in the store do nothing for players looking to expand their collection, and every game mode has its own specific entry fee and prize payout.

How to use promotional codes to start your MTGA card collection.

The latest codes are as follows, granting a combined 21 packs. There are more codes available with cosmetics and card sleeves. But more on that in a future article.

Why you should take advantage of Magic the Gathering: Arena’s Daily deals

The easiest way to explain why you should take advantage of the Daily Deals is that regularly it includes effectively free gold. Commonly the gold is in the store as a paid option, requiring a small amount of gold to purchase a larger amount of gold. The best way to get the most gold out of the Daily Deals is to check back every day, exactly as the developers planned.

One of the best ways to expand your card collection in Magic the Gathering: Arena is through participating in Draft Events. There are several different Draft modes, including a best of one, best of three, and ranked or unranked variants. You can (and in most cases, should) spend both your Gold and Gems on Draft Events. Unlike sealed formats, you can pick all the rares if you want to in Draft, getting you (on average) more bang for your buck.

Some drafts work through a gold-entry fee and could reward Gems. Making it is one of the only ways currently available to convert Gold to Gems efficiently. In the best of three draft modes, the prize payout for five wins is a slightly larger amount of gems than the entry fee, breaking even on the original entry fee of gems invested. Consistently achieving five or more wins in these drafts allows you to expand your card collection at no cost. A term commonly used for breaking even on your entry fees while expanding your collection is “Going Infinite.” There is a significant difference in the rewards for two wins and three wins, two wins being extremely poor return on investment. So if you are not focused or perhaps tired, drafting may be best left until tomorrow.

Why participating in the Ranked Modes each season matters.

For constructed, starter decks are viable at the low ranks as you can only move up. As everyone climbs eventually, you often find opponents with similarly new or starting decks in your first games, allowing you to get in some good practice against players of similar skill. Competitive decks don’t start to pop in until around platinum and diamond, so be sure to rank up as much as you can for those rewards. In the ranked draft, opponents are of similar rank. But not necessarily those in your particular drafting pod.

When you make a new Magic the Gathering account, and after every season reset, there will be a window to play in extremely low ranks, while the rewards are consistent throughout the season. Especially if you drop down into a low rank, it is worthwhile to wait until most of the stronger competition that reset advances to silver, gold, platinum, and beyond. Even for the newest, least-experienced players, It is extremely worthwhile to climb at least a few ranks every season since there is no cost to participating.

A helpful tip for maximizing Set Collection in Magic the Gathering: Arena

The final thing I learned that I believe proves useful to new players pertains to wildcards and collecting playsets. In Magic the Gathering: Arena, a Wildcard can transform into any card of a similar rarity. As such, Wildcards are extremely precious.

Every booster pack has a chance to include a Wildcard. In addition, after opening a certain amount of packs, you are guaranteed to obtain a Wildcard. Also after you complete a full playset ( probably isn’t helpful to any of you, just yet) you wont find 5th copies of a that particular card in any booster packs.

Here are the drop rates for Wildcards in a booster pack of Magic the Gathering Arena.

Every card you pick in a draft or open in the Sealed format builds towards another playset of that card. For those unfamiliar with the term “Playset”, simply said a playset includes four copies of all cards of a certain set, or expansion, as that is the maximum number you can include in a deck. The cards from Draft or Sealed add up over the life cycle of a set. In most cases, a draft cycle lasts from the moment an expansion releases until the next set arrives.

If you pick the 5th copy of a card in a draft, you receive 20 gems in return, 40 for the 5th copy of a mythic rare. This is because the packs you use to draft do not have duplicate protection. Duplicate protection protects the packs you own from containing useless 5th copies of any given card. By holding booster packs until you move on to a new set and then opening all of them after filling out your collection for that set, you maximize your total completion of that set.

By using spare wildcards to fill out playsets prior to opening all your packs, especially common and Uncommon wildcards, you can further maximize the amount of the set you collect. Conversely, opening prize packs immediately builds playsets faster. This way players may build up playsets while still drafting the set, and can then start picking 5th copies to gain a small number of gems.

I would also advise saving rare and mythic rare wildcards at the beginning of your Magic the Gathering Arena journey. The advantage you can from slightly improving an entry-level deck pales compared to working on crafting an expert deck in the future.

Closing thoughts for what beginners need to know about Magic the Gathering: Arena

I hope these tips help you avoid making some of the mistakes I did when I first started. There is a lot to learn about Magic the Gathering: Arena and the game can become expensive quickly. Try using these tips to reduce the cost a bit.

The most recent set, Dungeons & Dragons – Adventures in the Forgotten Realms, is fantastic for new players due to its similarities in playstyle with the basic core set of Magic the Gathering. It is also a blast to play! Venturing into the dungeon is one of the best Magic the Gathering experiences to date, and I couldn’t recommend it highly enough. Go kick down some Dungeons Doors!

For more content, be sure to look at our recent work including Mewwy’s guide to Galakrond in Battlegrounds, what you need to know about the Firestone App, and three exciting reveals from the United in Stormwind Hearthstone expansion.