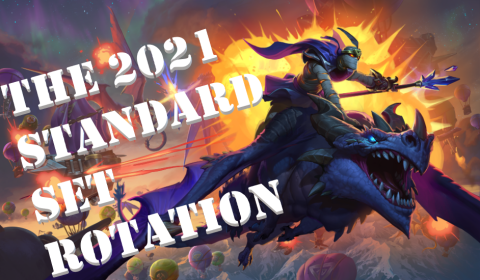 The next set rotation for Hearthstone is arriving soon, and a lot of things are going to change in the upcoming few months. A lot of changing in 2021, so let’s break down the most important things that will impact how you play Hearthstone.

When is the 2021 Standard Set rotation taking place?

While we don’t have an exact date yet for the Hearthstone 2021 Standard rotation, we expect it to be somewhere around Valentine’s day, about halfway through February. Mid-February is an assumption we make based on Hearthstone’s expansion release schedule, which is historically a new expansion every three to four months. Based on the last Hearthstone expansion, Madness at the Darkmoon Faire, which released in November, we can make an educated guess on the date the new Hearthstone year officially kicks off.

What expansions are leaving the format with the 2021 Standard set rotation?

So far, there are four Hearthstone expansions confirmed to leave the format with the 2021 Standard rotation. The Rise of Shadows, Ashes of Outland, Saviors of Uldum, and Descent of Dragons expansions leave the format from the 2019 set, and the Galakrond’s Awakening expansion from the 2020 year is leaving alongside them.

The rotation means the end for many of the current Hearthstone decks in their entirety in the Standard format. For example, Bomb Warrior loses its most important tools in cards like Wrenchcalibur and Blastmaster Boom from the Rise of Shadows expansion.

Other archetypes that are unlikely to return early on in the 2021 Set rotation are the large number of Highlander (or singleton) archetypes currently in the format. As cards like Dragonqueen Alexstrasza and Zephrys the Great leave the format, there likely won’t be enough support for that style of deckbuilding early on.

What is next for the 2021 Hearthstone Set rotation?

Morale is high for the upcoming year of Hearthstone as new game modes, expansions, and updates keep players engaged. The 2021 year for Hearthstone includes four new major expansions, each with what the developers call a Miniset, around halfway through each expansion. These new minisets include 35 entirely new cards each, with a focus on drastically disrupting the meta. The new sets, alongside the regular 135 card expansions, bring a total of 170 new Hearthstone cards for you to play several times each year.

Replacing the Classic Hearthstone set with the Core set.

A quick breakdown on what to expect in the 2021 Core Set.

The fantastic thing about the yearly Core set is that its 100%, completely free. That’s right, FREE! All 235 cards every year, including many cards currently limited to the Wild format, free for everyone who reaches level 10 or above on the Hearthstone classes.

What is Hearthstone’s new Classic format?

Alongside the announcement of the upcoming Standard rotation, Blizzard revealed the new format, Classic. In the new Hearthstone format, Classic, players experience Hearthstone in the original June 2014 state. Old favorites like Handlock, Miracle Rogue, Freeze Mage, and many others make a return, and we could not be more excited.

More announcements for the upcoming changes to Hearthstone come with the BlizzConline event on February 19, so stay tuned for more updates.

2 comments on “The Hearthstone 2021 Standard rotation: All you need to know”