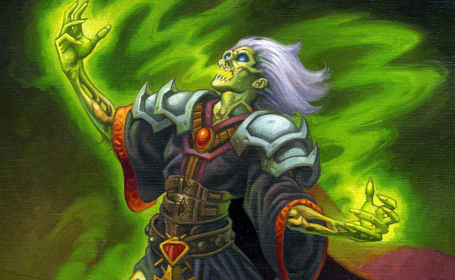 Using your hero’s life as a resource

For years the Warlock Hero Power, Life Tap, allowed the Warlock class to shine to various extremes. Unlike with many classes in Hearthstone, Life Tap actually enables the differing archetypes, rather than a series of all-powerful base-set cards such as those of the Druid class. The reason for the strength of Life Tap is its unlimited flexibility.

Whether you play one of the aggressive Warlock decks, a deck with one copy of each card, or even a combo-archetype of Warlock, the hero power enables it. Having the guarantee of generating resources without requiring your Hearthstone deck to fit around a specific theme is something unique to the Warlock class.

The only downside of Life Tap is the fact it damages your hero. However, it is important to keep in mind that your Hero’s life is a resource. Finding the right balance of protecting and utilizing your life as a resource is one of the most difficult things when learning any deck of the Warlock class. Throughout the years, players used to try and reduce the risks Life Tap brings by including powerful health generation tools in their archetype. The best examples of this are Antique Healbot, Reno Jackson, and even Voodoo Doctor if you go far enough back in time.

There are several cards that defined the class throughout Hearthstone’s six-year history. For the aggressive archetypes, for example, Soulfire and Power overwhelming played a major part in the early years of the “Zoo Warlock” archetype. Back in December of 2014, the 2.0.0.7234 update included some of the first post-beta nerfs for Hearthstone, including Soulfire changing from zero to one mana in cost.

Throughout the years’ Warlock found success with many different archetypes. From flooding the board to playing turn three Mountain Giants. Going as far as to only play one copy of each card, or only playing Even cost cards, or even combining the two. The identity of the Warlock class is more diverse than almost any other in the history of Hearthstone, so let’s take a look back at just some of the extremes that Warlock achieved.

Warlock’s journey starts in the days of the closed beta for Hearthstone with one archetype of Warlock standing out among the rest. One of the first successful archetypes of Warlock was the “Handlock” deck, a control-killer archetype centered around cards like Molten and Mountain Giant.

By utilizing the Life Tap in the early turns, Handlock created the option to play a four-mana Mountain Giant as early as turn three, with access to The Coin, or consistently on turn four, for four mana. The combination of these, at the time, overwhelming threats made Handlock one of the most powerful archetypes for its era.

Zoo Warlock, a new identity for the Warlock class

With the release of the Curse of Naxxramas expansion in June 2014 a new archetype started. The board flooding archetype, now known as Zoo Warlock, relies on taking control of the board & never letting go. The introduction of the tough to remove minions like Haunted Creeper, alongside the infamous Knife Juggler, made the Zoo Warlock a menace at the time.

Since then, while the “OP” decks come and go, some form of Zoo Warlock remained at the top of the tier lists. Controlling the board in Hearthstone is such an inherently strong and consistent gameplan it is unlikely to ever truly be gone.

The Ashes of Outland

Skipping ahead a few years, the Ashes of Outland expansion introduced some of the most powerful Zoo Warlock tools to date. Just some of the tools introduced with this Hearthstone expansion for Warlock are Nightshade Matron, Kanrethad Ebonlocke, Hand of Gul’dan, and Darkglare. Before we get into Darkglare, and what monster it created, let’s talk about Hand of Gul’dan.

Hand of Gul’dan is quite possibly the most powerful Warlock card of all time. Between its synergies with Nightshade Matron and Expired Merchant and its overall effect on how players can build their Zoo deck, it is certainly a contender for the spot. Hand of Gul’dan is going to define the Zoo archetype for a long time to come, in both the Standard and Wild format.

The pre-nerf Darkglare deck had the ability to play over a dozen cards alongside several Molten and Flesh Giants in a single turn as early as turn four. By combining one-mana self-damaging tools Darkglare Warlock effectively generated mana at the same time it discounted its Giants. In addition to that, Raise Dead created even more of these resources in addition to generating two mana on its own.

The combination allowed players to completely take over the board, or lock their opponent out of having any answer at all, as early as turn five or six. The ability to defeat ANY deck in the entire Wild Hearthstone format, with no answer, that early on made the deck one of the strongest decks of all time in Hearthstone to date.

The combo is still possible, but less explosive in the post-nerf version of Darkglare Warlock, however. As of November 2020, the Darkglare Warlock deck remains at the top of the meta, just behind the ever-popular Reno Priest archetype.

With Warlock being by far the weakest class currently available in the Standard format, let’s focus on where it’s strong, the Wild format. With the Madness at the Darkmoon Faire expansion, the Warlock class gains several incredible cards. The two notable legendary cards include the Deck of Chaos and Tickatus.

Deckbuilding with Deck of Chaos

Since the reveal of Deck of Chaos, many people have speculated the possible impact of Deck of Chaos on the Warlock class. Ideas were thrown around for the return of a deck like Malygos OTK, or some other niche combo decks. I’m more excited about the inclusion of this tool in Reno Warlock, a deck that traditionally plays many synergistic cards with Deck of Chaos. Just some examples include several of its best tools: Reno Jackson, Zola the Gorgon, Kazakus, and Brann Bronzebeard. All of which are a vital part of the deck’s gameplan.

Destroying your opponent’s deck with Tickatus

Tickatus, on the other hand, is a true control & Reno Warlock tool. Straight away it’ll have a spot in the Control archetype and synergizes equally well with Reno Warlock. The option to combine Brann Bronzebeard with Tickatus creates a situation where you can destroy up to ten cards from your opponent’s deck. A tool like Tickatus might allow Reno Warlock & Control Warlock to contest the best deck in the Wild format Reno Priest, more than before.

Other niche impacts for Tickatus include the possible inclusion of the tool in Mecha’thun Warlock. Mecha’thun Warlock is a unique type of Control Warlock which requires you to cycle through all remaining cards in your deck, hand, and board to win the game on the spot. Tickatus’ possible impact here is to use it to actually burn your own cards, an effect you rarely want to utilize.

Find more Card Game Basics here, such as our Basic guide to Value, or the Card Game Dictionary!