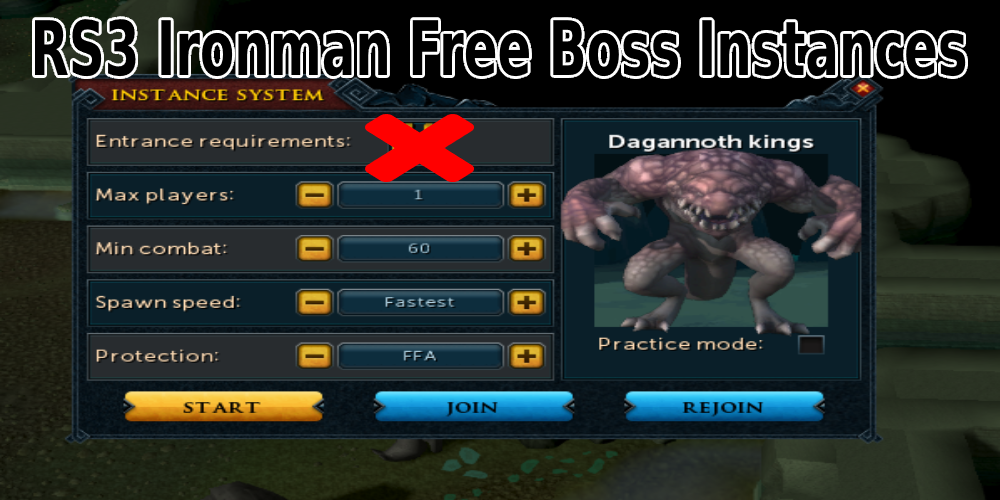 While many of the experienced Ironman are already familiar with the mode’s tricks, there is one surprising of which many people never heard. The trick works through the instance system, for ironman players in particular. While the concept works for all accounts, there is no benefit to the method for non-ironman players, as their instances are either free or cost GP at any respawn speed.

The basics of Instanced Boss realms

As you know, some bosses have costs associated with their private instances as a way to remove some gold from the game. For Ironman players, however, it is free to make “normal” speed instances all across Runescape3.

However, most people aren’t aware that the respawn speed of the bosses is a setting you can change on an already existing instance. That is where the “trick” comes in. Ironman players can create these regular speed instances at, for example, Dagannoth Kings. Leave the realm, and re-join the instance with the fastest respawn speed to obtain items easier or just improve the speed of killing any boss.

One: Create a regular speed instance at any boss with an associated instance cost.

Three: Attempt to enter the instance by opening the Instance menu.

Four: Change the respawn speed from “Normal” to “Fast” or “Fastest,” depending on your preference.

Important to remember, at the original Godwars dungeon, teleporting out to reset the instance does not work unless you have the Anachronia totem of Intimidation active. The trick doesn’t work in the original Godwars Dungeon because of the 40 kill count requirement of entering the boss’ lair. While leaving the boss room through the Door or the Altar Teleport brings you back through the first door, the kill count matters when entering the door into the actual boss room. As such, to reset the speed of the Godwars Dungeon instance, you would need to obtain kill count twice (if teleporting out) or collect 80 kill count, which would allow you to leave the area and return through the two doors immediately.