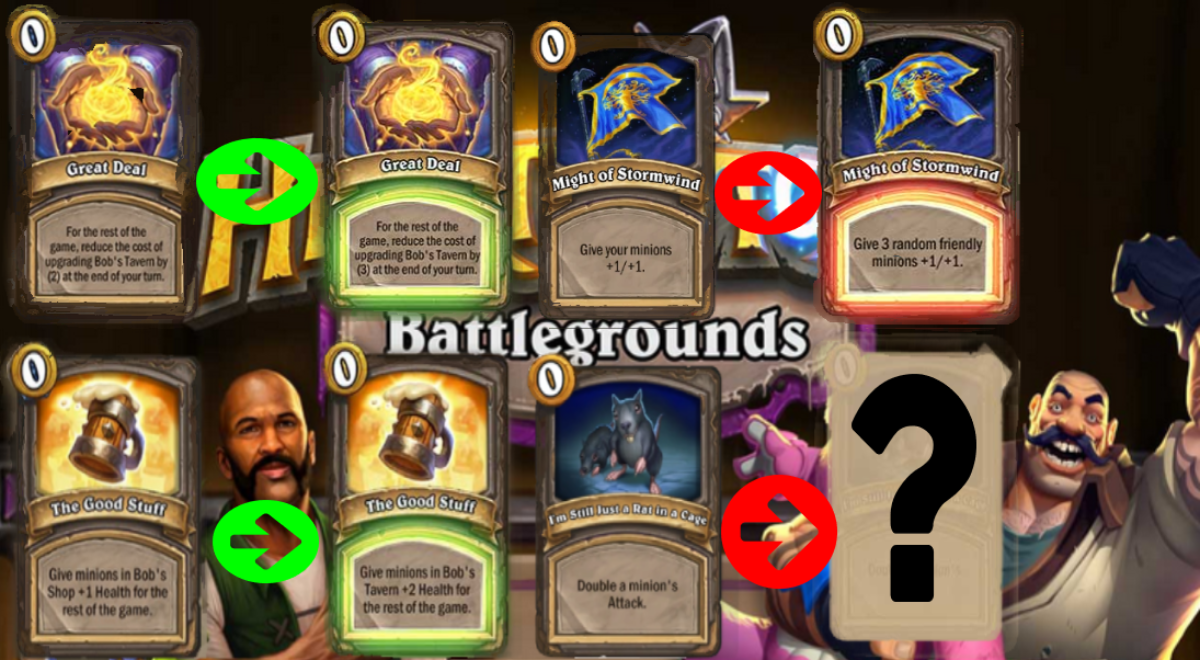 More than half a year ago, with the initial release of the Darkmoon Prizes for Battlegrounds, we looked at and evaluated each of the prizes, which tens of thousands of you used to gain perspective. Now, with the return of Darkmoon Prizes in Battlegrounds patch 20.8, Mewwy returns to talk all about the cards that have changed and how you should adjust your picks moving forward.

For those looking for the Comprehensive Guide to Darkmoon Treasures, you can read all about it here.

Might of Stormwind, is it still good? – Darkmoon Treasures

After the change to Might of Stormwind, the card went from one of the best to a situationally worthwhile Darkmoon Treasure. Since it is now limited to three, rather than all of your units, there is more strategy to deciding which of your minions you want to buff. You use it most commonly on turn Four (The six gold turn), where you usually purchase two minions to expand your board. However, since you often have more than three minions after you purchase two, it matters in what order you buy and play your units.

Alternatively, if you follow the Rafaam Curve, you already have five minions, which reduces Might of Stormwind’s overall strength due to the increased randomness.

After the change to Might of Stormwind, the other treasures, Pocket Change and Gacha Gift, are far superior for the first Prize turn. Before the changes, these were far closer in strength to each other, but they aren’t close.

The Good Stuff needed the buff, and now the treasure is significantly stronger than before. It is amongst the three best treasures in the game, along with Pocket Change and Gacha Gift. The actual strength of The Good Stuff depends on the units you are looking to pick up right away. A good example of that is the unit Spawn of N’Zoth, which prefers – not – to have the extra health, which decreases the immediate value of the Good Stuff. However, there are a number of situations in the game where you may prefer Good Stuff.

The Good Stuff is strong in a lobby where you have Mechs and Demons, and to a lesser extent Quilboars and Murlocs. Mechs and Demons can utilize the extra health well, as they become more difficult to kill with Mech’s divine shields and Demon’s already good statline. For Quilboar, it helps with their frenzy effects while Murlocs are now able to trade when they previously could not. For certain heroes that prefer buying a lot of minions and get strong by constant buys (Such as Millhouse, Aranna, Kurtrus, C’Thun, Guff, Mutanus, Ragnaros, Sindragosa), they may prefer this treasure over the others as it gives them a strong spike in power.

Unlike the original Great Deal, the new Great Deal is among the best options for the Tier-Two prizes. While it can’t beat the immediate strength of On the House, it is in contention as the second-strongest Tier-Two treasure. A great situation to pick a Great Deal is when you are behind when you play a hero that needs to reach the higher taverns eventually. By allowing yourself more gold to invest in improving your board, you can stabilize your board and work towards the higher Taverns.

Overall I’m Still just a Rat in a Cage is just overall not great. The treasure moving to Tier-Two significantly improves the quality of the Tier-Three treasures, but it also makes the best Tier-Two treasures like On the House less common. If you have a strong Cleave or Divine Shield unit that benefits immediately from the large attacking value such as Cave Hydra or Deflect-o-Bot.

The main Tier-Three treasures that you now find more commonly include Buy the Holy Light and Top Shelf.

How do these changes affect Tickatus?

Overall these changes make Tickatus more consistent. The Might of Stormwind was a way for Tickatus to get a lot of tempo in the early game, but there are still good choices in the Tier-One pool. The change to a Great Deal and I’m still just a Rat in a Cage makes Tickatus’ options better in the mid-game. When it comes to the Tier-Three pool, Tickatus also has a better chance at finding Ice Block.

For more of Mewwy’s Battlegrounds content, follow on Twitch, Twitter, or join our discord! Are you looking for something different? Read all about the up-and-coming heroes Xyrella & Vol’Jin & Mutanus & the old favorite Millhouse Manastorm!