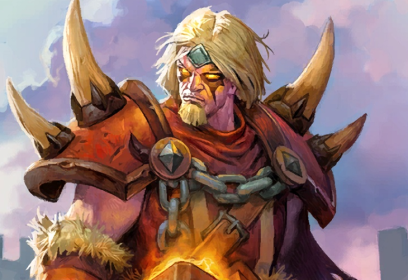 Lord Barov is my favorite hero to play because of the additional strategy element Lord Barov’s hero power, Friendly Wager, adds to the game. Besides that, Lord Barov also appeals to the strategist in me since Friendly Wager lends itself to more decision-making possibilities due to the additional gold you get access to on occasion. Because of the extra decisions you get to make with Lord Barov, there is a lot more to gain from understanding the game well.

To help players of all levels better understand Lord Barov, I’ve decided to create this guide focusing on three sets of tips and strategies. These sets of tips range from the most basic to several advanced strategies.

Lord Barov will rarely ever use gold to reroll early in the game. Given a choice between leveling up your tavern or picking up bad minions, you should generally level your tavern up. Gold efficiency is important for all heroes. However, the importance of gold efficiency is particularly true for Lord Barov, who can turn that one gold into three.

The easiest round to bet is the second turn of the game. The second turn is simple because you can make strong inferences on which minions each hero is playing. For example, If a hero has played a demon, hasn’t lost a fight, and has lost two hp, they’ve played a two attack, four health homunculus. Or if a hero has played two murlocs, they have a 2/1 Murloc Tidehunter and a 1/1 Murloc Scout.

The third round gets a little more difficult, but not by much. Players who have picked up tokens have an advantage, and players playing Kael’thas, a hero. He buffs every third minion purchased by +2/+2, which is advantageous in their matchups—choosing between Elise Starseeker and Galakrond on the five gold turn? Choose Elise Starseeker, knowing that she is likely to have three minions to Galakrond’s two minions since Galakrond generally still works on evolving through his ability, Galakrond’s Greed.

Understanding how each hero spends their gold through the first seven turns helps decide your bets. For example, Galakrond tends to hero power until they have a six-drop, which means they’re usually freezing weaker minions until turn five and therefore weaker through turns one to four or three to seven gold. Captain Eudora is another hero who has a different leveling curve, and they’re usually weak until turn six. On turn six, they spike in power because they get a random golden minion, in addition to a (likely) tier-five minion.

The importance of The Rafaam Curve for Lord Barov

To understand the Rafaam curve, it’s important to understand Hearthstone Battlegrounds’ matchups and how you’ll spend your gold if you lose. Here’s an outline that describes roughly what Rafaam does each turn.

2: Buy a minion and hero power.

3: Can reroll once, buy a minion, and hero power.

The Rafaam curve is a concept we cover further in Mewwy’s Basics for Hearthstone Battlegrounds guide.

The best thing to do to improve your bets’ accuracy is to disconnect the game every turn to skip the battle animation. Having more time will give you more time to calculate who will win the next fight mentally. This time is invaluable. Disconnecting early on is a good habit with Lord Barov because it helps you in the later turns when you potentially have more than ten gold to spend and have too little time to think! That said, watching animations is fun! I will only start disconnecting on the 8-gold turn, but I recommend disconnecting until you gain the hang of Lord Barov.

For more information on how to set up fast disconnecting, be sure to read our simple guide covering the Windows Firewall method.

The next most important tip is capitalizing off tokens. Tokens (and token-equivalents) include Alley Cat, Murloc Tidehunter, Sellemental, and Deck Swabbie. To capitalize off of tokens, do NOT bet on your first turn. Betting on the first turn is a crapshoot. Even if you can get a refund on ties and a positive proposition in theory (netting overall), losing that one gold is more punishing than winning two gold is rewarding. Further, you’re missing the most important information for making that bet (which minions each hero has). If you have a token on the first turn, bet on the second-turn and you can sell the token to level up.

Winning bets is great, and upgrading your tavern also feels great good, but the goal of the game is to win. Winning means having minions to fight each round. If you win all your bets, you can level to six by the nine gold turn, but you’d probably take a lot of damage to get there. After that, you might have one bad fight and just lose.

Note that these minion quantities are suggestions to help you maintain good health. There are always exceptions to a rule, such as winning every bet, making mistakes, and losing too many of them.

If you’re winning most of your bets, then there’s only one thing to do. A normal hero will look for scaling units and limp from fight to fight. Since Lord Barov can level to taverns five and six earlier than most heroes, it’s easier to find scaling units like Brann Bronzebeard, Razorgore the Untamed, Nomi Kitchen Nightmare, Kalecgos Arcane Aspect, Lightfang Enforcer, Majordomo, and Lil’Rag.

To best capitalize on your winning bets, you need to picture your final seven minions and purchase minions and make decisions that will get you there. Good players do this during a normal battlegrounds game, but it’s easier to see this with Lord Barov winning bets. For example, if you pick up an early Kalecgos Arcane Aspect, it’s fine to pick up all those battlecry units. Still, you should be looking for Nadina’s and poison Amalgadons to really solidify your composition so you should level to six when you’re unlikely to lose the next fight.

The do’s and do not’s of endgame Hearthstone Battlegrounds

Have an early lightfang? Again, pick up poison Amalgadons and some selfless heroes to sub in for light fang for extra damage. You should continually picture how you’d like the final fight to go, and make it difficult for the opponents to counter you. Waiting for your final fight doesn’t mean that if you have lightfang, you wait until the top two to insert your golden selfless hero. It means that you should monitor the other fights and keep an eye on how fast other heroes are scaling. If you’re facing elementals and all you have is lightfang, you want to knock them out before they outscale you.

Dragons and elementals are at the very top because elementals can scale, and dragons scale second-best but have Nadina. Murlocs, pirates, and demons offer decent scaling of their own. For example, if dragons and elementals are missing from the game, you level to 5 and find your Brann Bronzebeard’s and Lightfangs and scale from there. But now, there’s less of a need to level to 6 to pick up Nadina or Kalecgos.

Playing Lord Barov requires a lot of skill, but it rewards skillful decision-making more than any hero. Thanks for reading this guide!

Do you want to have your deck featured or work with AceGameGuides on creating strategic content? Email Arend@AceGameGuides.com and we’ll talk! For more of AceGameGuides, be sure to join the new discord!