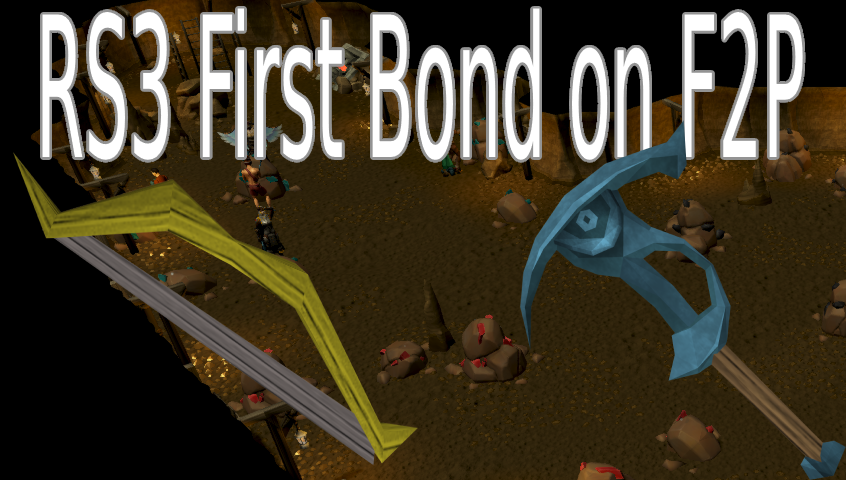 Before we get into how you best go about obtaining a Bond in the free-to-play worlds of Runescape, just think of this as a warning. Obtaining a bond in the F2P worlds is objectively not a great experience and is extremely time-consuming. If you have the option to, it is highly worthwhile to purchase at least two weeks of membership (or wait until a Twitch Prime promotion) to start your account. It is far easier to earn enough GP in two weeks to continue sustaining your Membership through in-game currency than it is to earn the required ~26M GP in a free-to-play world.

However, some people don’t want to or can’t afford to pay for their first Membership, so here is a simple path to follow to earn the GP required to continue your exploration of Gielinor.

How to earn your first GP in F2P on Runescape 3.

Earning your first GP in Runescape is quite tough, especially on a fresh account. A great place to start is picking Raw Potatoes from the Potato Plants near Freda’s house in northeast Burthorpe (the location you first enter the world of Gielenor). Each inventory of potatoes is worth around 25k GP, which gives you a great starting point. Try and collect somewhere around 200 potatoes before continuing to have a solid amount of GP for the next step.

The next portion of your journey is going to involve the Grand Exchange a lot. Follow the Grand Exchange tutorial at the entrance, and sell your Raw Potatoes to get a solid cash stack of ~175-200k GP, depending on the current prices. From here, you are going around all shops you can find and look for items you can flip for a profit on the Grand Exchange. Since Stores restock daily, it’s worth remembering where you have the biggest room for profit, as you’ll want to repeat these every day until you unlock your first Bond, after which it remains a daily activity but with more specific stores in mind.

Some of the best options for Free-to-Play players include several Magic Stores in Port Sarim, Varrock, Burthorpe, and Al-Kharid. Buying out just these four stores of Fire & Air Runes costs approximately 50k GP and turns a profit of about 160k GP per day in just a few minutes when sold on the Grand Exchange.

A different option is the Ranging & Armor shops around Varrock Square. Both of these have decent profit margins on various items, so be sure to see if any of those are worth picking up. Horvick’s Armour store, for example, sells various Black, Mithril, and Adamant items, which Member’s use as dismantling items for the skill Invention.

The same goes for Lowe’s Archery Emporium, which sells various pieces of Studded and Leather armor for Clue Scrolls, Invention, or low-level Ranging gear. A large number of items here have a profit margin of 1000 or more GP per item.

Why making multiple accounts could speed up the process.

Since there are no requirements to making more than one Runescape account, one way to speed up reaching your first Bond is to create more than one account. There are many restrictions in place, however, that make this a less appealing option. The restrictions exist to combat gold farming. New accounts that haven’t previously become a Member have a trade limit of 25,000 GP per hour. However, since the limit is based on real-time, it is possible to log in once per hour to trade portions of the profit.

If you are willing to put through the process, you could easily increase your income of gold towards a bond by 100-200k a day for each account. Doing so significantly reduces the time it takes to reach your first bond, but it is not worthwhile once you have at least one account that is a member’s account.

The main two ways Free-to-play players can earn active money are through Fletching and Mining. These skills have their benefits and downsides and are the current best “consistent” moneymakers for free-to-play players.

The best available money-making method in Free-to-Play is fletching Yew Shortbows, which requires level 65 in the Fletching skill. Due to the Yew Shortbow’s value for components for the Member’s skill Invention, they are incredibly profitable, earning up to a million GP an hour profit. There are two main drawbacks to the method of which you should be aware. The first downside is the amount of money that is required to perform the skill consistently. To get the maximum amount of money per hour, you need supplies worth approximately 3 million GP per hour of stringing the bows, which is a significant amount of money for free-to-play players.

The other downside is that to reach the best rates for Fletching is the amount of effort and attention required. Unlike many skills in Runescape, stringing bows for Fletching only allows for approximately ten to fifteen seconds of “AFK” time between actions, which is very intense by Runescape’s standards.

Why Mining is a great alternative for Free-to-Play

The other money-making method for free-to-play is Mining. Since the Mining & Smithing rework back in January of 2019, the skills improved significantly. Mining Adamant, Luminite, and Runite Ore generate a profit of 500-750k per hour for free-to-play players. The main upside from this method, however, is how incredibly relaxed the mining skill is now. Players can AFK for up to a minute while maintaining optimal profit rates or up to five minutes for a lower profit per hour.

The best place to train is in the Mining Guild, located in Falador, and requires level 60 mining to access. The Mining guild is also the only location where Runite Rocks are found (outside of the Wilderness) for free-to-play players.