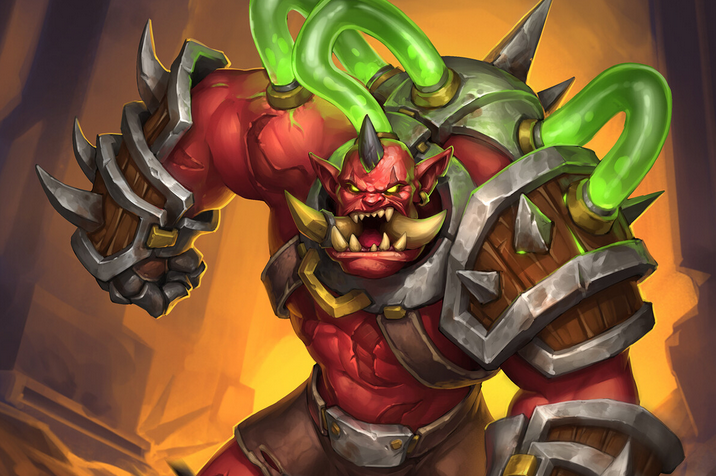 The post-Evolve Shaman Darkmoon Faire is a diverse place, with a great variety of decks from which to choose. Although the Darkmoon Races don’t seem to have caused a great meta shift, with Rogue and Warrior still being the best classes, this guide aims to help you navigate the shifting landscape with Enrage Warrior. Enrage Warrior returned to its seat near the top of the meta, which it vacated after the Scholomance Academy’s release.

Enrage Warrior is a deck that aims to crush aggression through the use of Risky Skipper &  Armorsmith combos and the use of late-game combos and burst through cards such as Kor’kron Elite, Grommash Hellscream and E.T.C, God of Metal to close out games.

The deck core of Enrage Warrior

The 24 cards above are essential to Enrage Warrior’s success and are must-haves in the deck. Ancharrr, Battle Rage, and Cutting Class give the deck efficient card draw, which is essential given the large number of synergies in the deck. Sky Raider is an excellent turn one play since it gets you on the board, and the pirate it generates can often help you later in the game. Sword Eater is an excellent board control card, as it soaks five damage and often kills at least two minions against aggressive decks while also discounting the cost of Cutting Class.

Inner Rage works very well with Bloodsworn Mercenary while offering a turn two or three blow-out with Warmaul Challenger. Lord Barov, on the other hand, is just absolutely insane, especially with the Skipper package. Other tools like EVIL Quartermaster are generally superior to Bomb Wrangler as it is a stronger play when you don’t draw Risky Skipper and the fact that you can use Inner Rage better elsewhere.

Enrage Warrior has various paths to success. Here are just a few I’m confident in recommending; how you fit these tools together is up to you. Each build path targets a different part of the overall Standard Hearthstone meta, so adjusting as you play is worthwhile.

Spiked Wheel is a very solid new addition to Enrage Warrior. The card is particularly strong against aggressive decks, and currently better than Reaper’s Scythe. These strong points come in addition to the fact Spiked Wheel is a very cheap way to enable Cutting Class. It’s almost like a one-mana more flexible Fireball in slower matchups, as you almost always have the text active. However, running this card prevents you from pursuing a hybrid approach with both combos, so it’s debatable whether Spiked Wheel makes the cut.

The E.T.C. Broomstick combo is an interesting inclusion for the Enrage Warrior deck since the package is only three slots from what most consider the deck’s core build. The E.T.C. combo itself is probably more effective in Enrage Warrior than Control Warrior. You often only need to clone E.T.C once and have a Lackey or Sky Raider, or any sort of board presence to find lethal, on top of chip damage from weapons and board. The E.T.C. combo is particularly strong compared to Kor’kron Elite in the Druid and Paladin matchups, as the combo ignores Taunt and may have some merit in other matchups.

Is the Kor’kron Elite combo (1-2x Kor’kron Elite, 1-2x Shield of Honour) worth including? For those unfamiliar with the traditional Enrage Warrior burst combo, it’s simply cloning a Kor’kron Elite with attack buffs. Compared to the E.T.C combo, it is stronger in the Miracle Rogue matchup, not through the combo itself but through the cards being stronger in isolation; and against Priest, which can comfortably ignore E.T.C Warrior by not playing minions. Whether the Kor’kron Elite combo or the E.T.C. combo is better for your specific rank depends on what you run into on the day. Try learning both, and see if there is a playstyle you prefer.

Options I don’t believe are worth playing.

Several card combinations aren’t worth playing anymore. These include Reaper’s Scythe and Corsair Cache, which Spiked Wheel replaces. Bomb Wrangler, the effective worse version of EVIL Quartermaster, and Livewire Lance, a card nobody played since the Ashes of Outland expansion.

Besides that, tech cards that don’t synergize with your win-conditions are just not worth playing. That includes tech cards like Cult Neophyte or Ooze in most metas.

The Example Decklists for Enrage Warrior

The mulligan for Enrage Warrior

How to the deck synergizes with Risky Skipper.

The best use of Skipper varies from matchup to matchup, but the basic combos remain the same. I’ll cover all the pieces and how to use them.

The final synergy worth mentioning is the interaction between Lord Barov and Risky Skipper. A combination that effectively clears (almost) any board in Hearthstone for just four mana. The strength of the Risky Skipper & Lord Barov turn allows Enrage Warrior to perform as well as it does in the current meta. Without it, the deck simply wouldn’t have a way back into games it falls behind on early.

Enrage Warrior, remembering the goal of tempo and weapon-beatdown.

Beyond the Skipper turns, Enrage Warrior looks to play cards like EVIL Quartermaster and Sword Eater to develop a board while retaining utility and use weapons to control the board or burn down the enemy hero. In terms of playing for tempo, you should be willing to put anything except Risky Skipper, Armorsmith, or pieces of your combo on the board in a way that doesn’t float mana.

Warmaul Challenger is an essential part of this; do not ever think of it as a removal card. It is a three mana 1/10. Those are good stats, especially when you run Inner Rage. If you can Inner Rage a high-health Warmaul Challenger and then clone it with Bloodsworn Mercenary early in the game, you should always do it. Even against aggressive decks where you might think you want to save the cloning effect for Armorsmith, as the early game blowout arguably impacts these decks more than the Armorsmith mini-combo.

Of course, Warmaul Challenger is also very useful for removing early game minions; that said, you should be flexible in evaluating it. Similarly, don’t save Bloodboil Brute only for Risky Skipper turns; often, playing Warmaul Challenger for seven mana is the best play against slower decks, or making certain trades to discount him enough on turns four to six.

For more matchup specific data, Tomat0 wrote up the in-depth information for those interested in that. The information is quite long, and our stats reflect that most readers get turned away from reading guides they consider too long. The information in this article should be a great place to get started with the deck, so let us know what you think of this new approach.