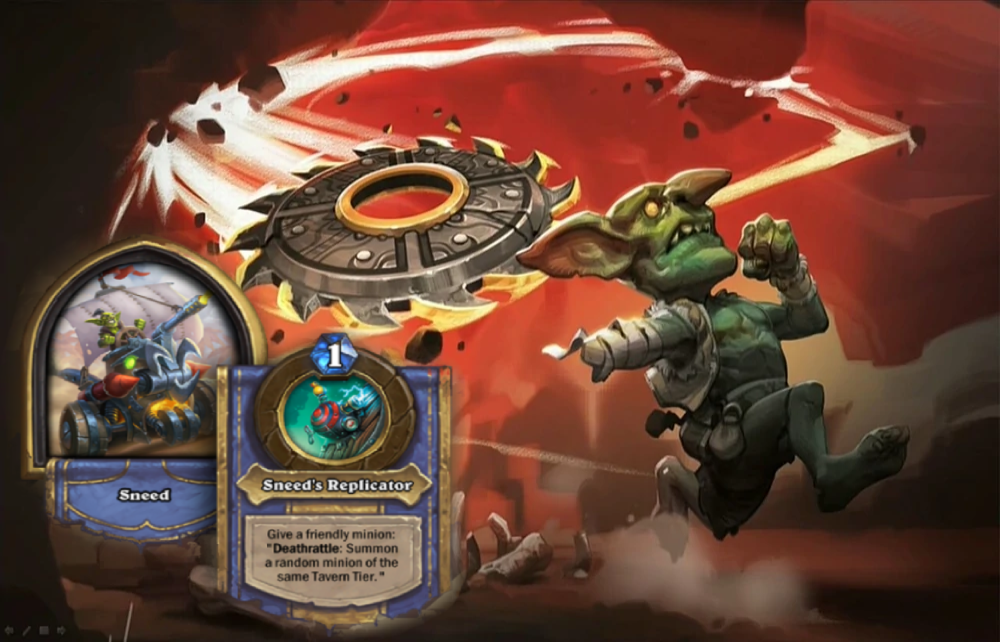 With the Avenge meta running rampant in Battlegrounds, it only fits we tell everyone how to play Sneed’s, a hero that performs quite well in the current meta. Sneed’s may seem incredibly strong to most players, and he is, but I want to elaborate how exactly you can play Sneed’s that may not be so obvious. A lot of this guide will refer to Avenge and Transitions, so please check back at those guides if you want an extra explanation on those.

The Basics of Sneed

Sneed’s Hero Power, Sneed’s Replicator, states: Give a friendly minion: “Deathrattle: Summon a random minion of the same Tavern Tier.” What you need to know about this is that it stacks. You can use this on the same minion multiple times. In a way, you can imagine your hero power is one gold for a free minion to fight for you. So what are some cool things we can use with this hero power? Before we discuss the Avenge minions, here are some minions you may want to look out for.

Khadgar: Like Monstrous Macaw, Khadgar helps in the early-to-mid game by summoning copies of the deathrattles you spawn. He is much more reliable than Monstrous Macaw and can be the key to scamming your opponents.

With those minions in mind, I would also like to warn you of some minions on which NOT to use your hero power. Acolyte of C’Thun, Rat Pack, Ring Matron, Imprisoner, Replicating Menace, and Omega Buster are the ones I would suggest to never hero power. For example, Acolyte of C’Thun, Ring Matron, and Imprisoner will prioritize their actual deathrattles/reborn effects.

Since these minions have taunt, they are often the first minion destroyed, causing them to spawn their tokens before the minions from your hero power. In a similar spot are Rat Pack, Omega Buster, and Replicating Menace, which spawn too many deathrattle minions. Since there is a limit on your board space, your hero power probably won’t proc when they get destroyed. Ghastcoiler, however, is still a decent choice. You normally position a minion like Ghastcoiler to go last, so it has a better chance at filling the board with strong units than the previously mentioned minions.

You, as Sneed’s, have two things in mind going into every match:
1. Scam your opponent.
2. Get the cards that say Avenge.

The first one we already touched briefly. Cards like Baron Rivendare, Khadgar, and Monstrous Macaw can turn an unfavorable matchup into a successful fight. You have to use your hero power to the best of its abilities, which means putting it on minions with the best tiers that can fight. Do not waste your hero power on Tavern-Tier one or two minions unless you have no other choice. Since Tavern-Tier four and six have the best fighters, you want to prioritize these when building yourself a powerful Warband.

Remember, your hero power still follows the rules of which tribes are in the game. Tribes with the best fighters include Mechs, Demons, and Beasts due to cards like Mechano-Egg, Mechano-Tank, Ring Matron, Imp Mama, Ghastcoiler, and Savannah Highmane. Putting your hero power on a Taven-Tier 5 minion is not bad as cards like Deadly Spore can be a game-changer, but there is more room for error since there are many cards that lack the proper stats.

Sneed’s absurd synergy with the Avenge.

Now, let’s discuss Avenge. All of the Avenge cards work incredibly well with your hero power. Bird Buddy, Palescale Crocolisk, Mechano-Tank, are powerful tempo cards that can win you fights easily. Since multiple minions get destroyed every fight, the Avenge minions become important cards you need to win your fights. Sometimes you can ride off their strength and power level to Tavern-Tier five or six. Remember, these are not win-conditions on their own, but they will be able to get you to first place if you use their strengths right while you look for a way to take the crown.

Budding Greenthumb scales and can help build your Warband to be at end-game strength. He can quickly help scale your minions with your various deathrattles. Compared to most heroes, Sneed’s hero power makes him a very consistent scaling unit.

SI:Sefin can be your win condition if you manage to give poison to all of your minions. Combining the build with Baron Rivendare and Selfless Hero, it becomes a build that can stop compositions with large amounts of health. You also will be able to spawn plenty of deathrattle minions to fight against other builds with various deathrattle spawns.

Tony-Two Tusk, Witchwing Nestmatron, and Impatient Doomsayer will completely change your game plan once you get them. Tony-Two Tusk is obvious; with his ability to create a Pirate golden, you can make powerful cards like Peggy Bristlebone, Cap’n Hoggarr, Dread Admiral Eliza, Nosy Looter, or Goldgrubber.

Obviously, a Brann Bronzebeard helps. But with the various gold you can create from those cards, and other strong battlecries like Smogger, Murloc Tidehunter, Alleycat, Amalgadon, Fishflinger, and Menagerie Jug, Wichwing Nestmatron becomes a must sought-out card. Remember, you only can get the battlecries from up to your current tier. Impatient Doomsayer is no different, but the cards are less impressive because she is Avenge (4) and only gives you demons. However, you can still transition into demons. Just like Witchwing Nestmatron, there are chances they will give you multiple copies of a card, making it easy to find a triple and discover a win condition.

Sneed’s best tribes are Demons, Mechs, Elementals, and Beasts with all of this in mind.

To me, Sneed only has one curve that you should be doing. It is a special curve that only a few heroes such as Guff Runetotem, Infinite Toki, and Captain Eudora can do. Normally, we call this the Toki Curve. The curve compliments Sneed’s hero power the best and helps you exploit his strengths.

From there, start looking for Avenge cards. Use their strengths to find win conditions, or in the case of Dazzling Lightspawn, make that card your win condition.

With Sneed, you need to understand how to make the Avenge cards work, especially Witchwing Matron and Impatient Doomsayer. Eventually, your opponents will be able to outscale your deathrattles, especially when they have builds with large stats. Witchwing Matron and Impatient Doomsayer give free cards that you can use as gold and direct you into a new win condition.

Since Sneeds is powerful in the early game, do not be afraid to power level with him. Sometimes it can be risky, but Sneed is someone who can find his way back to being powerful when played right. I hope you all enjoy the guide, and I hope to see you all climbing.

For more of Mewwy’s Battlegrounds content, follow on Twitch, Twitter, or join our discord! Also be sure to read Mewwy’s previous guides, covering all you need to know for Fungalmancer Flurgl, Diablo the Lord of Terror, and how you can improve transitioning in Battlegrounds.