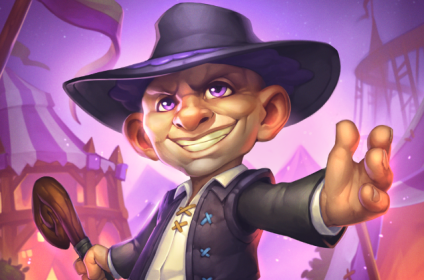 The Hearthstone Fall reveal stream is over, and many exciting things are coming to the game soon. Alongside the new Hearthstone Duels coming out later today, a new Legendary card Silas Darkmoon arrives early. Learn all about how to unlock the new free legendary card as early as today and play him before the Darkmoon Faire arrives in Hearthstone.

Who is Silas Darkmoon

“Battlecry: Choose a direction to rotate all minions.”

How to unlock Silas Darkmoon today

The new legendary card Silas Darkmoon is available later today, October 22, to all PC users. The 16.6 update, which also introduces the new Hearthstone Battlegrounds hero Zephrys the Great, arrives on PC later today. With the Mobile update expected in the coming few days, when it gets approval from ios & androids app stores.

Do you want to have your deck featured or work with AceGameGuides on creating strategic content? Email Arend@AceGameGuides.com, and we’ll talk! For more of AceGameGuides, be sure to join the new discord.