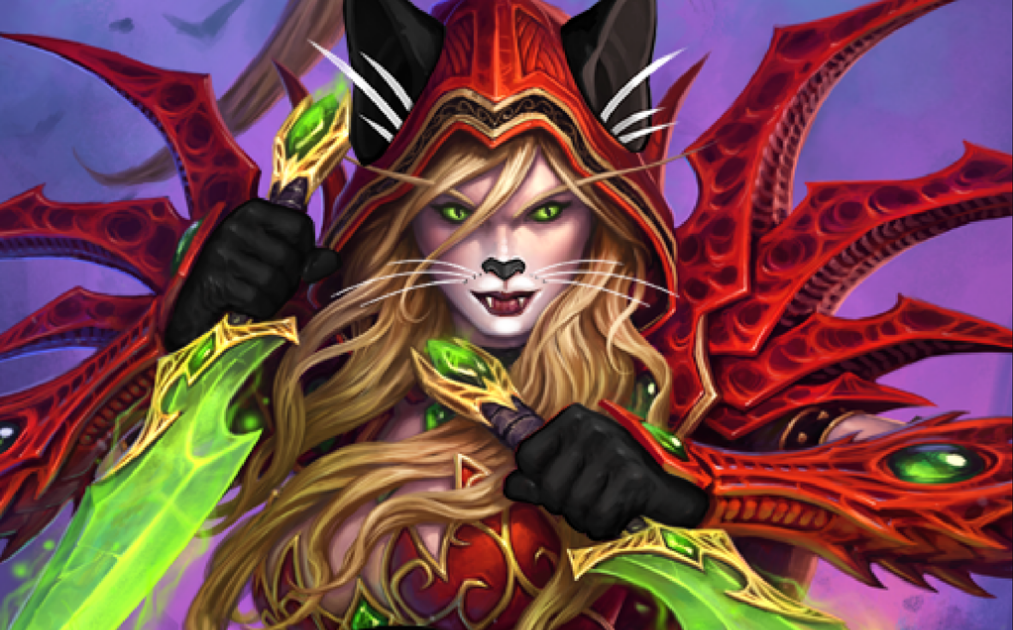 Aggressive Rogue archetypes are a part of Hearthstone since practically the beginning. The availability of good spell-burst cards like Eviscerate and cold blood and constructing big damage weapons and aggressive early minions has rendered the Rogue class a good place. Rogue is a class that excels at powerful, aggressive strategies.

Currently, Kingsbane Rogue has its place in the meta as likely the best-known Rogue archetype. However, this deck is a close second because it is less consistent but more aggressive than Kingsbane Rogue. I’ve played nearly 500 matches of the Scimitar Aggro Rogue deck. I am ending with a score of  283 Wins and 190 Losses, which is 60%. The near 500 matches exclude many played on Mobile, and with older versions of builds, I used to test cards and reach the lists I’m here to share with you today.

The core cards of the deck

I believe that the Scimitar Aggro Rogue Core must consist of these 24 cards to be an optimal foundation for the archetype, and while I believe my feature list is the closest to perfect with its 30 cards, I think the final six cards are often worse than the core. Since Hearthstone decks require thirty cards, finding the best final six has quite some room for exploration. With the upcoming Darkmoon Faire mini-set, the new Nitroboost Poison card is for sure worth including. Whether Nitroboost Poison replaces Deadly Poison in the deck or if playing both is consistent enough is something I plan on testing on release. Be sure to check back later when I update this guide to include my full thoughts on the new card!

Why You Should Play Aggro Scimitar Rogue

In truth, I believe that Aggro Scimitar Rogue is a faster deck than Kingsbane Rogue, an important statement because Kingsbane Rogue is the supposed best Rogue deck at the moment. Comparing the two decks, Kingsbane has more consistency by running more card draw such as Swindle and just Kingsbane – a weapon with seemingly infinite use that the deck synergizes around. In favor of Aggro Scimitar, when you equip the Hooked Scimitar, it enables Dread Corsairs and Cutting Classes much faster to mana cheat sooner and much easier than Kingsbane.

The advantage of being a faster deck means in the meta means the Scimitar Deck has a better chance to kill Big Priest before it can revive its Shadow Essence targets or kill the deck with spells after doing enough initial damage through the Shadow Essence. It can also face race Secret Mage better, be more likely to kill a Darkglare before things get out of hand, and kill reno decks pre-reno better. However, it is worth noting that Kingsbane Rogue is better against Reno Warlock when they draw Reno Jackson.

Now let’s talk about a couple of things you wouldn’t anticipate about Aggro Scimitar Rogue by just looking at the list.

I achieved a positive winrate against many of the top meta decks like Odd Warrior, Reno Priest, and Darkglare Warlock throughout testing the Scimitar Rogue deck. Being favored against many meta decks is evidenced by my climb from almost 2000 to 134 legend.

The value of the five-drops

One of the most common things I hear when streaming the Scimitar Rogue deck is that the five-drops, Captain Greenskin and Doctor Krastinov, must be bad. However, I’ve noticed quite the opposite when playing these cards in my decks.

Since scimitar comes out on turn three or four, it is easy to save at least one weapon charge until turn five. Since the weapon emerges at four attack strength and these cards enable at least an additional six attack strength each overall. In addition to that, they come on a minion and synergize well with the rest of the decks’ tools.

When Nitroboost Potion enters the game with the Jan. 21 mini-set the first cards cut are sadly Captain Greenskin, followed by either one copy of Deadly Poison or the Buccaneer. Nitroboost Potion is incredible, and probably forces the list to speed up even further. Because of that, our “slower” minions are the first to go. If there was an option to include Captain Greenskin and Buccaneer alongside them, I would love to, but sadly at this time, that seems difficult to accomplish.

The Pen Flinger was a recent addition to my list that helps defeat Big Priests through Shadow Essence and helps answer minions better from my opponents and maximize mana usage and damage. Sinister Strikes are also a recent addition. One mana deal three damage is very good for the mana cost and helps efficiently finish off the opponent when playing secret passage.  I used to run a sap in the list but find the direct damage to be better overall than a sap that I often failed to draw for the specific matchups for which you want Sap.

The main thing to mulligan for is a turn-one pirate to pull Patches the Pirate from the deck, and Raiding Party to bring all of our pieces together. Going first, I wouldn’t keep anything else, honestly. Going second, you can have a bit more flexibility, opening up the option to keep a Preparation or a Foxy Fraud.

The general strategy of Scimitar Rogue

The deck’s strategy is to play minions on curve, fastly cycling through the deck while cheating mana and assembling big weapon damage. It is important to get the appropriate amount of chip damage – not too little and not too much – and making the right amount of trades. The deck always wants to go the second because the coin assists you drastically with all the combo tools the deck plays.

Matchups & Meta – How Scimitar Rogue lines up against the meta decks

Let’s talk about how this deck performs against the top decks on the Wild Ladder.

Against Darkglare Warlock, I would favor Rogue in the matchup. The early damage from pirates and weapons combined with the finisher of spells and Scimitar swings is often enough to win the matchup, particularly since the deck relies on self-damage, making it easier to finish them off.

Against Secret Mage, I have a positive record as well. The matchup against Secret Mage is a little more difficult than playing against Darkglare Warlock from a skill perspective; sometimes, you can not afford to play around certain secrets if playing around them means losing and or developing your plan too slowly.

The deck can often win despite Ice Block if the opponent runs it before getting two-turned by the Mage and often only loses to the block in terms of output. It is also rare they get Rigged Fair game to trigger because Aggro Scimitar Rogue goes face most every turn.

Reno Priest and Reno Warlock. Honestly, hard to comment on the matchups. Zephyrs the Great into Ooze or Ooze Tech is a common way to lose the matchup. On turn six or five, Reno Jackson can also be a loss if you have committed to Secret Passage. Essentially, if they have the powerful highlander cards, you are likely to lose the matchup. I have won more games than not against both opponents, but I do not feel very favored in the matchups.

Against Big Priest, it is about 50-50. Palm Readings discount the Essence often feels impossible to kill them before the Shadow Essence walls come down if they have Spirit Lash to sustain. Rogue vs. Big Priest is one of my least favorite matchups to play. It is often dependent on how good defense and heal they manage to have while reliably winning on turn five or six if palm if they discount Shadow Essence. The good news is that running Pen Flinger makes the matchup better, as it helps us deal damage directly to the face when the walls are up.

An advanced technique for Scimitar Rogue

Depending on the scenario, sometimes it is correct not to play a Dread Corsair even when it costs zero mana. Some scenarios you do not want to play the card into include: Shadow Essence in situations your opponent doesn’t have a way to kill their minion to revive it. Or sometimes you want to save it to test for Explosive Runes to drop Doctor Krastinov against Secret Mage. Or if the enemy board is too strong for the opponent and lines up well into Dread Corsair, you can often answer their stuff first and then lay it later when it is better on board.

Often if I have two pirates in my hand, I contemplate which one is better to play on turn one, and it requires thinking about the matchup. Southsea Deckhand always does two damage when it comes to it. So, I often drop a Prize Plunderer on one instead to try and create additional sources of direct damage.

Scimitar Rogue is a fast, aggressive deck that is viable to play on the wild ladder, will catch your opponent off guard, and can tech cards to make a list even better with further experimentation. If you want to learn even more about Scimitar Rogue, or just come hang out as I test the new cards from the mini-set later this week, be sure to follow me on Twitch!

For more unique Hearthstone content, be sure to take a look at our recent Wild Streamer deck collection by Gerben! Do you want to have your deck featured or work with AceGameGuides on creating strategic content? Email Arend@AceGameGuides.com, and we’ll talk! For more of AceGameGuides, be sure to join the new discord!

1 comment on “An introduction to the unique wild deck, Scimitar Rogue”