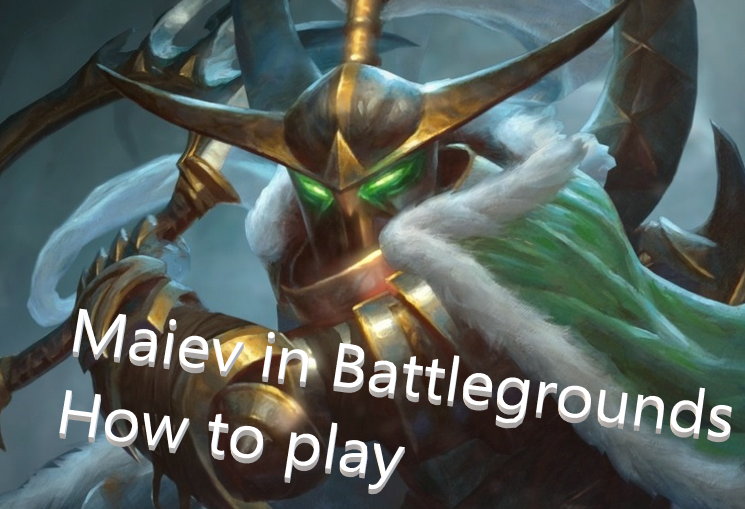 As we promised in our guide covering How to win at Battlegrounds we want to bring you guides for the heroes that are very powerful, but are not intuitive to play. One such powerful, yet not intuitive hero is Maiev Shadowsong. So here it is, the all you need to know guide to playing Maeiv.

Editor’s update: Maiev Swansong received a drastic balance change in Patch 20.8.2, approximately a year after the initial publishing of this guide. It is unknown just how much Maiev is affected by the change, but the leveling curve portion of this guide is no longer applicable, and as such removed.

Starting out with Maiev Swansong in Battlegrounds

Maiev Shadowsong is one of my favorite heroes available currently in Battlegrounds. However, Maeiv Shadowsong is a strange hero to play due to her unique ability, Imprison. Imprison locks up a minion, at the cost of one gold, causing the minion to go dormant for three turns. After the dormant period, the minion moves to Maiev’s hand, with a +1 attack & +1 Health buff.

In general, Maiev Shadowsong’s strategy revolves around finding all the pairs you can get your hands on, and tripling into tier five and six minions in the mid-game. Since it only costs a single gold to purchase the minion (after three turns of waiting), Maiev Shadowsong is able to find pairs and triples far easier, at less of a cost to the strength of your current board.

One great use of Imprison is to imprison a pair of minions when we already have one of that type on our board, granting us the completed triple after three turns. When you know you have a triple ready to go, without having to invest more gold in buying it, you are free to raise up your tavern quite safely, sacrificing some turns to get a massive power spike later in the game.

The key units for Maiev Shadowsong

Since Maiev Shadowsong is one of the few heroes in Battlegrounds that can stay at tavern tier one for three turns, understanding which minions are best is more important and quite different from most other heroes.

Another thing to keep in mind, that since we are tripling into tavern-five minions, due to how strong an early Lightfang Enforcer or Mythrax the Unraveler are, we aim to have at least three different tribes on the board to come out swinging if we find one of the win-condition minions.

What about the early-game Darkmoon Treasure?

There’s two important spells for Maiev. Since we often completely fill our board by turn four, finding a Might of Stormwind is fantastic (changed in patch 20.8.2 with the return of Treasures in some games*). A +3/+3 buff is extremely powerful and helps you raise your tavern tier much safer. The other option we like is Rocking and Rolling, the three extra rolls give you a lot of extra chances to find the triple when you want it.

In addition to that, the New Recruit Darkmoon Treasure is particularly bad for Maiev. The extra minion in Bob’s Tavern doesn’t work with Imprison if you lock two minions, losing out on its value for many turns. Because of that, try and avoid it at all cost.

After all of this, the only thing left to do is find a composition dictator, a topic I covered in depth in my How to Win at Battlegrounds guide. Maiev’s best composition dictators include Lightfang Enforcer, Mama Bear, Cap’n Hoggarr, Nomi, Kitchen Nightmare, and Brann Bronzebeard. When you find one of these you can start working towards building your final composition and try to win your lobby.

If everything went right, Maiev has a strong start, weak midgame, and if played correctly, a very strong end game because you were able to get those key comp dictators early and push to complete the build around those units!

I also want to take this opportunity to invite you to Tenacity’s Educational Battlegrounds Community discord, with guides, tons of people to spectate and tutor you – all for free!

For more of Tenacity191, check educational streams on twitch and his youtube channel, where you can find more content about how to get better at hearthstone battlegrounds.