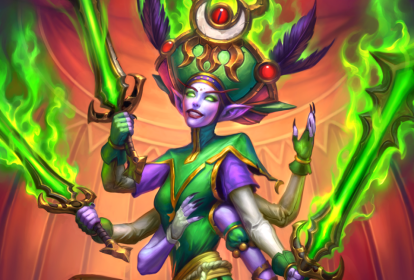 Maym is one of the few people to reach the highest ranks in both the Standard and Wild format utilizing Demon Hunter. Let’s hear what he has to say about the new cards and which are most likely to find their way into the meta!

1: A card I would advise against playing.

3: A card I expect to see competitive play.

4: A card that I expect sees a substantial amount of competitive play.

5/5: A card I believe to be extremely powerful.

Zai, the Incredible is a sweet one, that’s for sure. First, I love the magician art and flavor. Besides that, 5/3 for five mana “draw 2” is on rate with the average card strength; however, copying is much different from drawing. Zai, the Incredible requires a card in hand to generate value; it also doesn’t change the type of resources you have available in hand.

That said, Zai, the Incredible has the upside of copying important cards for added benefit. The idea of copying combo pieces, huge bombs, or even copying a Twin Slice and a Pen Flinger sounds pretty exciting.

Comparing Zai, the Incredible with Cobalt Spellkin in Demon Hunter

In my opinion, the big problem is the horrible stat line. 5/3 is trading with one drop stats. If we take a card like Cobalt Spellkin, a 3/5  for five mana that draws two one-mana spells, I think we get a good baseline for how Zai, the Incredible performs. I think Zai, the Incredible is a good card with a unique effect to use in many interesting ways, notably enabling combos that would otherwise be difficult or impossible to produce.

However, the prospect of playing Zai, the Incredible solely as a source of value seems inauspicious to me. Competing directly with Cobalt Spellkin, which can generate twin slices itself, as a pure source of value, I don’t see any reason to play the horrible 5/3 body over the other powerful draw options Demon Hunter can choose.

Zai, the Incredible copies cards in hand, which is an extremely rare effect. For that reason alone, I believe it to find its way into the Demon Hunter archetype. Likely because of some combo we haven’t thought of yet, that end up breaking some aspect of Hearthstone’s design rules.

Il’gynoth turned quite a few heads during the reveal, and for a good reason. A seemingly obvious inclusion in Soul Demon Hunter, which is currently a top standard contender, Il’gynoth also presents a unique combo opportunity.

Demon Hunter has so many lifesteal options from spells to weapons to minions, Il’gynoth will likely fit into any deck that plays multiple good lifesteal cards as a huge source of burst damage. As a combo enabler, the most obvious skeleton is Mo’arg Artificer + lifesteal spells + Il’gynoth.

Being a demon, Mo’arg Articifier works with Felosophy, or even a card like Zai, the Incredible if the best way to use this shell is by stacking multiple Mo’args. The combo shell seems a bit thin at first glance, but lifesteal spells are great at keeping you alive, and Demon Hunter has access to tons of AOE removal and card draw, all of which are very important in combo decks. It is important to keep in mind that Il’gynoth still deals damage if you lifesteal at full health.

Stillstepper, a tough evaluation in the Darkmoon Faire expansion

I think Stiltstepper is a bit of a sleeper. Don’t get me wrong, three mana for one toughness is awful, but “draw a card” is still to this day one of the most underrated lines of text a card can have. For that reason alone, I’m excited to try Stiltstepper out!

Assigning a value to attack & draw in the Darkmoon Faire

If we look at Heroic Strike, we can assign a two mana value to “give your hero +4 attack.” It is tough to assign a mana value to drawing a card. Taking wisp vs. novice engineer drawing a card is a full two mana, but those examples vary, and Wisp is pretty bad. Considering Arcane Intellect sees play at 1.5 mana per card, I think it’s fair to assign at least one mana value to the text, “draw a card.”

Meaning that on rate, every time you trigger Stiltstepper’s gain four attack ability, you are getting a 0 mana 4/1 worth of value, not amazing, but certainly playable in aggressive strategies with a low curve. Given the inconsistent nature of Stiltstepper’s ability, however, I must give Stiltstepper a strong three out of five, but I like the card, and I’m excited to try out on release in my Wild Odd Demon Hunter deck.

Priestess being a bigger threat and Performers being a bigger clear, basically like a flame strike. Many people are talking about Wrathscale Naga combos. Expendable Performers can absolutely fit into a token strategy or even a token combo strategy and be fantastic given how much output the card has.

Is it a minion or a weapon? Felsteel Executioner’s unique design

Bladed lady is my pick for the best Demon Hunter card in Madness at the Darkmoon Faire. I think Bladed Lady has massive implications for standard, which will be the main reason for my 5/5 rating. Considering Soul Demon Hunter is already so strong, Bladed Lady works very well alongside Soul Shard Lapidary and Marrowslicer, giving that deck access to a one-mana 6/6 rush.

If you can consistently add close to six attack on your hero, Bladed Lady is absolutely nuts. It’s just a matter of how quickly and how consistently assembling that +6 attack is. We already have Twin Slice, Marrowslicer, Chaos Strike, new cards like Relentless Pursuit and Stiltstepper, and Soulshard Lapidary, which satisfies the requirement itself alongside a hero power.

Overflowing Synergy for Bladed Lady in the Darkmoon Faire!

That’s a lot of synergy with good cards we want to play anyway! Gaining hero attack is something Demon Hunter does well, does frequently, and wants to keep doing throughout a game, making the requirement for Bladed Lady not at all restricting.

Every time a new Demon Hunter Hero Attack buff card is released, Bladed Lady gets significantly better, and I see Bladed Lady eventually trickling down to Wild. If, and when, we receive a strong 5-6 power weapon, then Bladed Lady’s stock immediately skyrockets. 5/5 for Bladed Lady.

It is worth noting that Bladed Lady is also a demon and works with Felosophy and any other demon synergies.

Throw Glaive will come mostly up off of Wandmaker, but Throw Glaive has its uses. However, Throw Glaive doesn’t strike me as the type of card I would generally want to add to my deck, but there are some exceptions.

Perhaps a deck exists that wants a lot of cheap spells. Maybe Questing Adventurer, Pen Flinger, or even wild options like Gadgetzan Auctioneer Auctionmaster Beardo could get some use out of Throw Glaive. The big problem with Throw Glaive, though, is if the target survives, you don’t get another copy.

Final rating: Throw Glaive – 2/5. Some potential exists, though unlikely to be included in the main decks initially.

The least exciting Demon Hunter card in the Darkmoon Faire

Renowned Performer isn’t particularly exciting. Flanking strike was a good card in its day, giving you three damage and a 3/3 body for four-mana. Renowned Performer is somewhat like that but requires you to deal with taunt minions first and usually only leave you with two 1/1 taunts.

Sure, sometimes it can value trade and survive with a point of health or 2, but that is unlikely only having three toughness. Renowned Performer feels like a much worse Restless Mummy.

Overall, I think Renowned performer could make it into a token deck or maybe a Highlander strategy, but at four-mana, I don’t see Renowned Performer being particularly great. It can trigger Corrupt on three mana cards, however, which could be valuable.

A 3/6 taunt, lifesteal, for only three mana in the Darkmoon Faire

A 3/6 taunt lifesteal body for three mana is fantastic, and I expect Insatiable Felhound to see some level of play. Other benefits include Raging Felscreamer working with lifesteal (Il’gynoth) and Demon synergies.

We may see the return of Raging Felscreamer demon decks that include Insatiable Felhound. Felscreamer not only triggers Felhounds corrupt by itself, it then reduces the cost of the demon. A 4/4 into a one-mana 3/6 taunt would help Demon decks survive long enough to play out their win conditions.

Relentless Pursuit is so close to being amazing in the Darkmoon Faire!

Relentless Pursuit does work well with Bladed Lady but must attack into taunts, unlike other burn style cards. I think Blizzard did a nice job balancing Relentless Pursuit; it will see some play, but especially in combination with Odd Demon Hunter’s hero power.

Is Redeemed Pariah the Tiny Knight of Evil for Demon Hunter?

On the surface, Redeemed Pariah may seem like Tiny Knight of Evil. However, it is important to remember how difficult it is to chain outcast cards. Or even to trigger Redeemed Pariah multiple times at all.

That said, discarding cards isn’t good, where on the other hand, there are tons of quality outcast options. Redeemed Pariah triggers after you play a card with an outcast effect, meaning you don’t need to play the card from the outcast position to trigger the effect.

That wording is what makes Redeemed Pariahs viable, in my opinion, as it will reliably grow in an outcast deck. I don’t think we have enough support for that dedicated outcast deck yet, but once Redeemed Pariah does have that support, I could see it being pretty good down the road. Good card. I love the flavor of Redeemed Pariah, and the art is just stunning.

Another card pushing the outcast strategy, I think Line Hopper is stronger than Redeemed Pariah, but they share the same issue. They seem sub-par outside of a dedicated outcast strategy.

Line Hopper and Redeemed Pariahl only get better with more time, of course, and they both have a lot of potential. Both still work when you cast an outcast cast without fulfilling that requirement, but neither seems incredibly exciting right now. Line Hopper looks more likely to fit into any deck that just happens to play outcast cards.

Even then, considering the nature of outcast, playing out cards just to get the Line Hopper discount before you can play the cards from the outcast position seems lackluster. I enjoy the flavor on Line Hopper and expect to see it appear in Wild Demon Hunter someday.

The second-best Demon Hunter card in the Darkmoon Faire, Acrobatics

Acrobatics! Finally, a solid way to draw cards for Odd Demon hunter decks. If Bladed Lady is not so crazy powerful,  then Acrobatics would easily be my pick for the best Demon Hunter card in the set, as I think Acrobatics will see play in the Wild format.

However, Acrobatics is likely less impactful on wild than Bladed Lady is on the Standard format. Arcane Intellect still sees play, and Acrobatics is strictly better. Three mana for potentially four cards is outstanding. A stellar tool for lower curve aggressive decks combo decks to potentially draw four from one card, a lot of slower decks will still play Acrobatics just for the great three mana draw two baseline. Acrobatics is a card I can’t wait to cast!

Dreadlord’s Bite, does it have a place in the Darkmoon Faire?

Hopefully, we can bring Illidan back into the wild meta! For more on wild Demon Hunter, check out my Scholomance piece The Rise and Fall of Illidan! For more of the AceGameGuides team, be sure to join our community discord & keep up to date with the latest posts!

What do you think about these new cards? What did I get wrong? Let me know in the comments below!