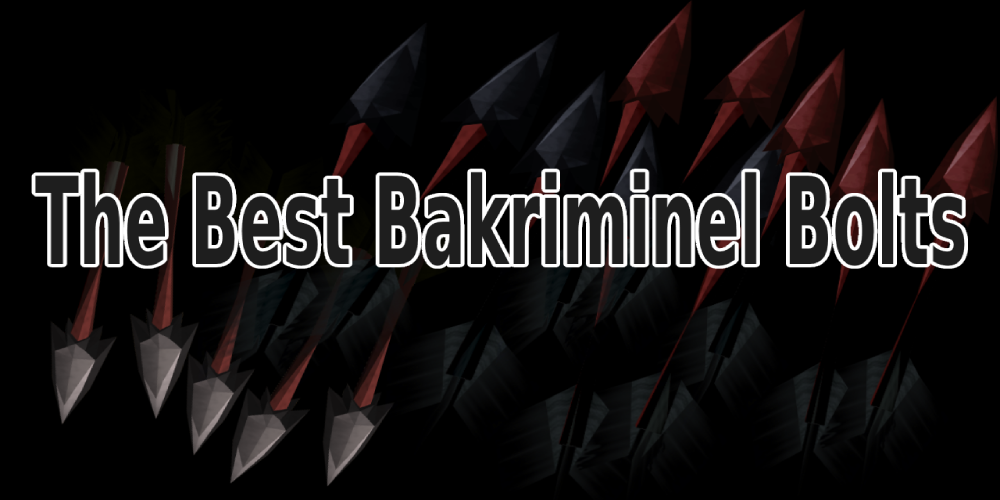 Runescape3’s best range ammunition are the Bakriminel Bolts. However, choosing the right one to use with eleven different gemstone bolt tips, each with its unique effects, isn’t easy. If you could ignore the cost of the ammunition, the simple “best” option is to use Hydrix Bakriminel Bolts everywhere you go. Still, as they are between five and ten times as expensive as the alternatives, it’s often hard to justify using these.

The best versions of the Bakriminel Bolts require level 99 in the Ranged skill, with the weaker, non-enchanted versions being available as early as level 80.

Make sure you use the (E) or Enchanted versions of the Bakrimininel bolts, as the main draw of the ammunition are the special abilities the different bolt-tips create.

The four types of Bakriminel Bolts you should use in Runescape3.

Alongside the strongest bolts, the Hydrix Bakriminel Bolts, you want to use three other types on the lower-level bosses to significantly reduce the upkeep of using your ranged setup. At around half the cost of the Hydrix Bolts is the Onyx Bakriminel Bolts, costing ~12,250 GP each. The Onyx bolts are commonly used on bosses with several phases or pretty much anywhere you can’t justify the cost of Hydrix Bolts.

The special effect of the (enchanted) Onyx Bakriminel Bolts grants you a 10% chance to trigger Life Leech. Life Leech deals an additional 25% damage to the target(s) and heals the player for 25% of the attack’s damage potential. While there are several ways to exceed the 10,000 hit cap, Life Leech caps at a heal of 2500 life.

The other combination of Bakriminel Bolts is the combination of Ruby and Diamond bolts. The cost of using these bolts is immensely lower than the Onyx and Hydrix variants. However, that comes at the cost of being comparatively weaker in most situations.

Why Ruby Bakriminel Bolts are a must-have for PVM

For more Runescape content, be sure to read the recent coverage of our ironman tips like how to safe spot Dagannoth Rex, or how you can get free “fastest” instances for (almost) every boss in Runescape3.