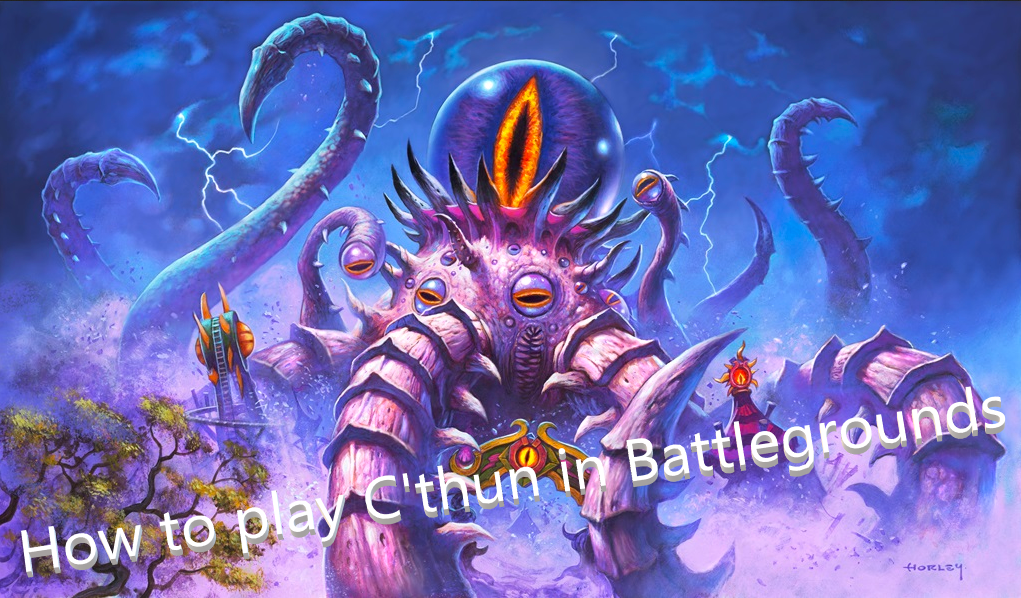 C’thun is one of the newest heroes in Battlegrounds. However, many people don’t seem to quite grasp how to play him quite yet. Because of that, I want to share with you how most high-ranked players utilize C’thun’s unique ability, Saturday C’thuns!. The strategy for C’thun is quite simple to understand, so learning it is a great addition to your hero arsenal.

Before we start, something worth noting is that C’thun performs best in games with Dragons, Elementals, and Mech’s available, due to the strength of the divine shield minions. Sometimes you end up having to pick it with two of these available, but it significantly hurts your win rate if you miss one of the three.

The importance of scaling Saturday C’thuns! every available option.

​The way, Saturday C’thuns! scales makes utilizing it every possible turn worthwhile. Let me explain how that works. Each time you use Saturday C’thuns!, you get +1/+1 for every turn your game lasts. Using it on turn one gives you between +10/+10 to +15/+15 by the time the game ends. While using your hero power every turn from the start of the game results in losing the first several turns, you get a massive spike in strength in the mid-game. ​

How to play C’thun in the early game

C’thun follows quite a simple gameplan since you limit your mana by two mana each turn.

However, you don’t always get the token start you want. So if you don’t find one, what do you do? The most important thing is to keep pressing the button to activate Saturday C’thuns. Besides that, simply follow the steps from above, but delay leveling by a turn. Simple as that.

Some other quick tips include looking for pairs to combine the stats & create larger threats later in the game. And just press the button every chance you get. I’ve said it before, I’ll say it again, nothing matters more than scaling your button.

C’thun’s entire game builds on pairs and divine shield units. Why divine shield? Because you will get a lot of stats, and divine shield scales the best in that case. Why pairs? Because when your board fills up, you can’t control where your buff lands, and you probably don’t want to sell the buffed units to create space.

Pairs are great for two reasons:

By now, you hopefully found a way to win the game. Ideally, you found a Lightfang Enforcer along the way, but that isn’t always possible. There isn’t much to say besides finding the right minions for C’thun since there aren’t any consistent ways to close out the game in the first place. His strength is in the midgame, where the number of buffs your board receives beat almost everyone. But, since we rarely scale into tavern six units, you often lose out to someone who leveled fast and found the right tools.

The low chance of first-place shouldn’t hold you off from playing C’thun. Following the simple strategy explained above, on average, gets you a consistent positive MMR outcome at most ranks. C’thun is one of the heroes I recommend new players to learn if they understand the gameplan.
If you enjoyed my guide and are looking for more tips and a BGs community, follow my Twitch and join the Battlegrounds discord! Let me know if you found this guide helpful in the comment section and I hope you will all keep on climbing!