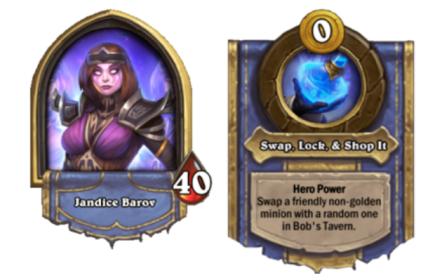 Jandice Barov has been one of the strongest heroes since her release but has always been one of the more difficult heroes to master. There are many crazy things you can do with her ability, with the most well-known being her ability to create triples with Murloc Tidehunter and Alleycat. It’s been a long time since we previously updated the Jandice guide, so here is an up-to-date version of the Jandice Barov guide for Patch 22.0 on 15/12/21.

The Basics of Jandice Barov

“Swap, Lock, & Shop It,” Jandice Barov’s ability, states, “Swap a friendly non-golden minion with a random one in Bob’s Tavern.” There are many things you can do with each tribe with your hero power: (Keep in mind, these are with the intention of repurchasing those minions.)

The most popular options include swapping minions for their battlecry effects, their benefits to other minions like Wrath Weaver & Demons, or one of many forms of utility. Some utility examples include creating space for effects like Battlecries or opening up a board slot to utilize the Magnetic keyword.

Below you can find a more complete list of all common uses of “Swap, Lock, & Shop It!”

All common uses of Jandice’s ability, Swap Lock, & Shop It!

For murlocs, the common options for your ability include: swapping Murlocs like King Bagurgle, or Coldlight Oracle for additional stats, swapping Primalfin or Seafood Slinger for triples, and additional discovery opportunities. And last, Swapping Murloc Tidehunter to triple your Murloc Scouts, a strategy that is especially powerful alongside Brann Bronzebeard and Khadgar.

Beasts have several primary ways of using Jandice Barov’s ability. The most common include swapping your beasts to buff them through Mama Bear or swapping Reanimating Rattler to grant more beasts the Reborn keyword. Like Murlocs, you can use Alleycat to triple Tabbycat, which is especially powerful alongside Brann Bronzebeard, Khadgar, and Mama Bear (the copies get additional stats for each summon).

The Mech Tribe is quite limited in options for Jandice and Swap, Lock, and Shop It! as none of the primary minions you want have strong battlecry or board-entering effects. The two common uses include creating space for your Magnetic keyword or buffing your Mechs with a Metaltooth Leaper.

Like the Mech Tribe, Demons don’t have as many uses for Jandice’s ability. However, the few main uses the Demon Tribe pursues have a large impact on the strength of your Warband. One example is the Wrath Weaver strategy we’ll talk more about in the future, or by using Soul Devourer to get free additional stats throughout the mid-game. Similarly, swapping Annilahan Battlemaster for more health buffs works well if you manage to get one early in the game.

When you play a Dragon’s composition, there are a few key uses of Jandice’s ability that can help you build a stronger Warband. Battlecries often help you improve your Warband significantly, especially if you pick up a Kalecgos later in the game. However, even without Kalecgos, there are still uses for strong battlecries like Murozond, which can help you pick up additional gold for your next rounds. The other use fewer people think of is to swap Nadina the Red later in the game to create the board space you need to look for additional battlecries.

The use cases for Pirates fit two primary categories, battlecries, and additional gold. Cards like Deck Swabbie and Southsea Strongarm are both powerful at the right stages of the game and impact the game in uniquely powerful ways. For certain strategies, it may be worth picking up a Deck Swabbie in the first round(s) and then switching it out to get a stronger minion for the first battles of a Battlegrounds match.

Similarly, swapping when a Freedealing Gambler is in Bob’s shop is always worthwhile. The chance at the three-gold unit can completely change the game.

Elementals benefit in a variety of ways from Jandice’s ability. An early one is Smogger, which works as a simple stat booster at most points in the game. Similarly, many Elementals work as good swap targets when you have a Lil’Rag, Nomi, or Dazzling Lightspawn on your Warband. In addition, swapping units like Tavern Tempest and Stasis Elemental help you find additional Elementals for your Warband.

Quilboar doesn’t have many good uses for the ability. In general, switching for Thorncaller or Razorfen Geomancer helps you collect Blood Gems, similar to switching when a Sunbacon Relaxer is in Bob’s shop. Overall though, the tribe does not make great use of what Jandice’s unique ability provides.

The “Neutral” tribe in Battlegrounds has several strong Battlecries you want to use. Units like Amalgadon and Hamuul are obvious options. Still, buffs like Menagerie Jug & Cup, Defender of Argus, and Strongshell Scavenger can make a similarly large impact in the right situation.

Jandice Barov wants to use her hero power at every opportunity since the ability is free to use. For example, even something as small as swapping a Refreshing Anomaly into a stronger minion like Pupbot or Acolyte of C’Thun can give you a minor but worthwhile advantage.

Later on, when you have your established build, you have to figure out the best way to use your hero power. For example, Elementals may benefit more from swapping your Crackling Cyclone or Wildfire Elemental to get additional Nomi/Dazzling Lightspawn stats instead of swapping the Tavern Tempest or Stasis Elemental for value. Remember: While your hero post may cost no gold, you still need to buy the minion if you want to swap. So you need a minimum of two gold ready to buy that minion again if you are confident you want to sell the minion you receive.

In the initial rounds, you need to find Murloc Tidehunter, Alleycat, or both to swap constantly throughout the next several turns. Enough time to at least get one triple. I’ll explain how to do this in the curve section of the game. Generally speaking, because of how powerful Jandice’s ability to get triples is, you want Murlocs and Beasts in the game. That does not mean it’s impossible to play Jandice with the other tribes, but it is not nearly as powerful.

The most important cards best utilize your hero power. Nomi, Kitchen Nightmare, Brann Bronzebeard, and Mama Bear are amongst the best, but there are many options for you to win your Battlegrounds match. Due to the tools that Jandice Barov looks for, you often discover triples for T5’s over the other options.

Turn one (3g):  Buy a Murloc Tidehunter or Alleycat. Swap the main body if there is a strong minion. Freeze.

Turn four (6g): Swap the Murloc Tidehunter or Alleycat. Buy it, and play it. Buy another minion.

Turn five (7g): Swap the Murloc Tidehunter or Alleycat. Upgrade to T3. Buy it and play it.

Turn six (8g): Upgrade to T4. Swap the Murloc Tidehunter or Alleycat. Play your golden token, discover a T5. Then make some space by selling two minions and tripling your last Murloc Scout or Tabbycat.

The token-on-one curve is the very standard Jandice strategy where you rush to get T5 minions. You may be at a low health total, but your discoveries make up for much of that in the coming rounds. Start forming your strategy with these discoveries and form a game plan to follow in the rounds ahead.

Turn five (7g): Upgrade to T3. Swap the Murloc Tidehunter or Alleycat. Sell a minion. Buy it again. If you have no room, then just hold it in your hand.

Turn six (8g): Upgrade to T4. Play your golden triple. Make your discovery, then make some space by selling two minions, and make your second triple.

The delayed-token curve is the backup strategy when you only find the token generator at turn two. You will be able to find the two T5 minions like the first curve at turn six.

Turn 4 (6g): Buy Murloc Tidehunter or Alleycat. Swap it. Buy it again. Triple the Murloc Scout or Tabbycat. DO NOT play it.

By this point, it is your choice to abandon the Murloc Tidehunter or Alleycat. If you find a Khadgar or another one of those minions, then you could continue to keep swapping minions and finding a T5 or T6. Make sure to keep enough space on your board if you pursue this option.

Turn five (7g):  Upgrade to T2. If you want to focus on keeping your weavers strong, keep swapping and buying demons. If not, upgrade again to T3 by selling another minion.

Turn six (8g): Triple your Wrath Weaver or keep finding demons. Kathra’natir is important, so we do not keep taking damage. If you triple Weaver, I suggest going for a T4 so you can find Impatient Doomsayer.

The Double Wrath Weaver strategy is an odd curve but is a worthwhile strategy to try with Jandice when there are no tokens available. Cards like Sellemental and Deck Swabbie are still important for economic reasons.

Jandice can also follow the standard, jeef, and warrior curve if you want to pursue curves that do not rely on tokens or Wrath Weavers. For more on all of these curves, make sure to look at our Curve cheat sheet.

Thank you for reading this updated guide, and we hope it helps you all. For more of Mewwy’s Battlegrounds content, follow on Twitch, Twitter, or join our discord! Also, be sure to check out some of the recent guides to Battlegrounds heroes like Cookie the Cook, Sneed, and Diablo, the Lord of Terror.