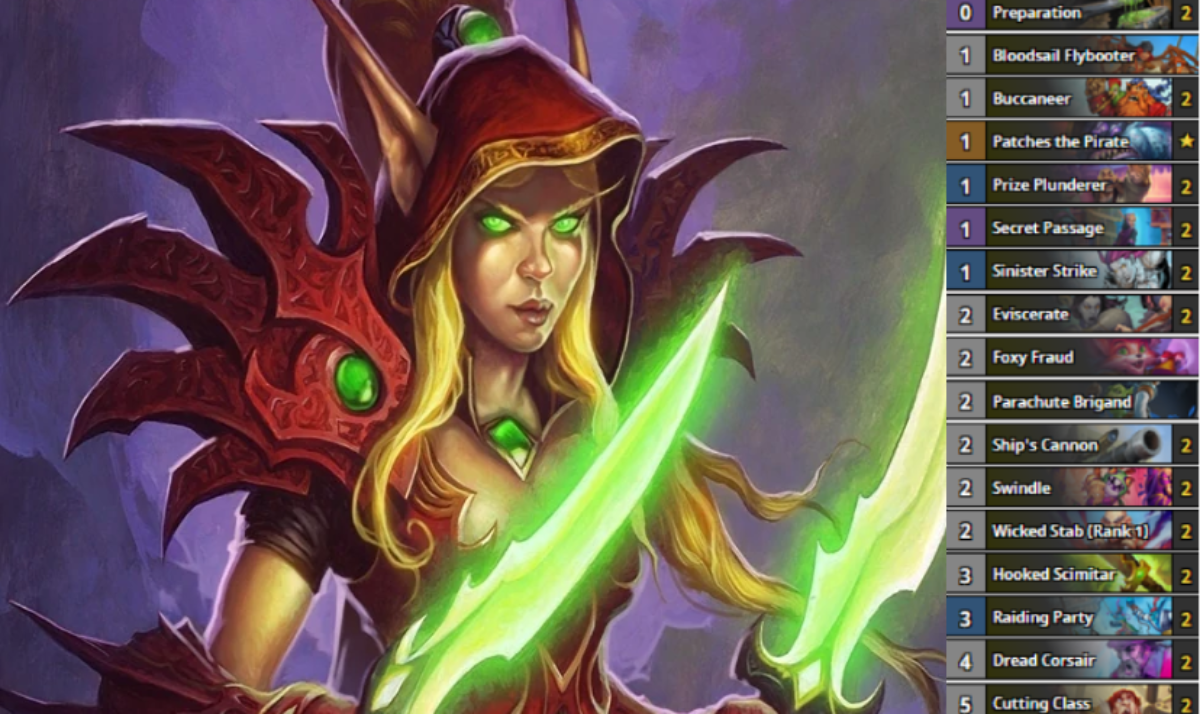 We first featured the Scimitar Rogue deck by LaboreSangre back in January of this year. Since then, the archetype slowly grew in popularity. Recently the Chinese Hearthstone server picked up the deck, and their results with the list are very impressive. LaboreSangre’s original Scimitar Rogue Guide; read more.

Why Scimitar Rogue is now more popular than ever before

The Chinese player 亚大伦 used Scimitar Rogue to reach Legend #1 after the June reset in a record 2-hour 18-minute climb to legend. One of the fastest recorded times to date. The list took off, and many players have tried to emulate that success throughout the month.

亚大伦’s list differs in one key way from LaboreSangre’s original list; it is now faster than Kingsbane Rogue. The main benefit of being as fast as absolutely possible was the increased chance of winning against the Combo Warlock deck, which is now gone from the Wild format since the main enabler’s removal from the format. The deck’s main target, however, remains at the top of the format. Darkglare Warlock continues to reign the Wild format, and the Scimitar Rogue deck performs quite well in the matchup overall.

You can find 亚大伦‘s list using this code and copying it to your Hearthstone Client or Deck Tracker.

If you are looking for a budget deck to learn more about the Wild format, the Scimitar Rogue deck might be a great pick. It is one of the more affordable tier-one decks in the Wild format, with only four Epics and one Legendary card. However, the downside is that all of these cards are necessary for success, so more budgetary replacements are unlikely to succeed.

Your one-cost Pirates are far and beyond still your highest priority. You want to get Patches the Pirate out of your deck as soon as you can, in addition to getting yourself established on the board the first chance you get. When they first try the deck, a common mistake people make is that they overvalue what Ship’s Cannon does for them.

Simply playing it out on turn two isn’t good enough to justify holding it in your mulligan, so try and think about how you utilize it. Also, there is some difference between holding it alongside the Coin and without. It is much easier to justify keeping Ship’s Cannon against any opponent that contests the board in the first few turns since it is a quite potent board swing with the coin.

For more of Deck Insights, take a look at Mill Rogue for the Wild format. If you are looking for something different, why not take a look at Mewwy’s latest article covering the Battlegrounds hero Vol’Jin.