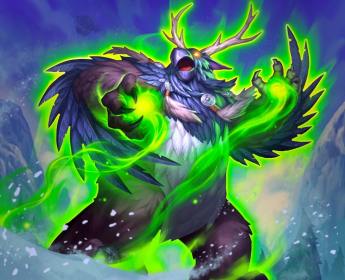 Embiggen or “Aggro” druid is gaining a lot of popularity in recent weeks. While the archetype of an aggressive style druid deck has been around for many years, the recent meta development brought new attention to the archetype. Many Chinese Meta Tierlists currently rank Embiggen Druid as one of the best decks in the Wild Hearthstone format, so it is something the team and I felt worth exploring.

Embiggen Druid is unique in the Hearthstone meta as it has the highest average game time of any deck in Hearthstone. The quick victories come at the cost of similarly fast losses. Some games are simply unrecoverable after a simple board clear from decks such as Priest or Warlock. However, since the recent Scholomance Academy card Voracious Reader drastically improved the overall strength of the deck.

The Embiggen Druid deck relies, as the name suggests, on the Descent of Dragons card Embiggen. The unique effect this card provides is an immense upgrade to your deck while remaining consistent in your mulligan phase.

The Embiggen Druid deck utilizes board-buffing effects such as Mark of the Lotus and Power of the Wild. Both of which are nearly always included in builds of the archetype.

There are several packages worth considering when creating your Embiggen Druid deck. Many lists currently feature many similarities, but the cards that differ can make all the difference.

The “Pirate” package includes cards such as Patches the Pirate, Ship’s Cannon, Bloodsail Corsair, Parachute Brigand, and Southsea Deckhand. The Pirate package is one of the most common inclusions in Embiggen Druid, due to the synergy between Patches the Pirate and Embiggen. The synergy allows players to pull Patches the Pirate with the Embiggen Buff by playing any other pirate. This interaction creates a very powerful early game.

The alternative to running the Pirate package is going old-school to cards such as Crypt Lord or Deathlord. I can’t recommend playing this build if you have access to Patches the Pirate & his friends. However, it is a workable budget alternative for those looking to build their collection.

Some people have tried to make Hobgoblin work throughout the years. However, due to the anti-synergy with Embiggen itself, this archetype style has a tough time competing.

There are several different buffing effects available to include in your Embiggen Druid deck. The most common options are the earlier mentioned Power of the Wild and Mark of the Lotus. However, Blessing of the Ancients is an option worth considering when paired with a card like Speaker Gidra.

In the past, players have found success with cards such as Mark of Y’shaarj and Mark of the Wild; however, these options have decreased in popularity in recent expansions. An alternative to this I see more of lately is Adorable Infestation, with its cheap cost and additional width it provides make it a good option against other aggressive decks.

Should Embiggen Druid play Innervate, Lightning Bloom, or neither?

With the recent increase in popularity that Embiggen Druid is experiencing, many players have taken to Twitter to discuss whether Innervate and Lightning Bloom deserve to keep their spot in the deck. I’ve now tried both with and without. Playing over 100 games between diamond five and top 200 legend MMR. (On Americas and the European server respectively.) Recently I have had more success with the deck below, which does not include Innervate or Lightning Bloom.

I believe there are several reasons for my increased success with the new list. With Voracious Reader, the Embiggen Druid deck is allowed to lower the curve significantly than earlier versions of the archetype. The reduction in the cost of the average cards in the deck reduces the strength of the additional mana since you frequently run low on resources to maximize the effectiveness of Voracious Reader.

The mulligan for Embiggen Druid is complicated. The reason for this is the lack of “always keep” cards the deck has. Certain tools such as Mark of the Lotus and Embiggen are clear tools to hold. However, the remainder of the mulligan is more based on how your cards synergize together. The key turns for Embiggen Druid are between turns one to four, and your chances of winning rely on how well you develop your board.

For example, a hand of three “good” 1-mana cards might look appealing at first, but you are likely to run out of steam very early on since the number of cards you get access to throughout the game is limited.

Another example is a card everyone, myself included, seems to overvalue when learning the Embiggen Druid deck. The card, Ship’s Cannon. Ship’s Cannon’s apparent synergy with other pirates looks very good when first learning the deck, but its often not optimal to hold onto in your mulligan stages.

The main reason for Ship’s Cannon often being less than optimal in your mulligan stage is that it often requires you to skip your first turn of playing. Losing one of your three to four development turns often punishes you far more than you ever realize. Do note that this doesn’t mean its always wrong to keep Ship’s Cannon & pirates in your mulligan stage. The best example of a good time to hold a pirates & cannon type of hand is against other aggressive decks. The “swing” Ship’s Cannon can be a gamechanger in many aggressive against aggressive matchups.

Try and consider how your cards work together, and when you get to play the cards, you hold onto in your mulligan phase. The mulligan is probably the toughest part of learning the Embiggen Druid deck, so it might take some time to get used to it.

The general strategy of the deck

The general strategy of Embiggen Druid is board development. Every turn is a decision-point of choosing to go “wide,” more minions, or “high,” often board buffs or playing a single larger minion in place of several smaller ones. The matchup you are playing at the time influences the decisions. What minions and what removal tools your opponent has access to are key influences on your decisions. Balancing the risk of board-clears and pressuring the board is a fine line to walk. The decision often forces you into a win/lose situation, based on a single available removal tool available to your opponent.

Tools such as Savage Roar are vital to the deck to close out games against opponents who choose to develop their minions or don’t have access to the right removal tools yet. It is often good to deal as much damage as possible with Savage Roar to pressure your opponent if you believe your board is at risk and have no way of protecting it.

There are several difficult matchups for Embiggen Druid in the current meta. For me, the most challenging decks are archetypes such as Cube Warlock and Raza Priest. Both of these decks have an excess amount of board clearing effects, making it easy for them to repeatedly remove your board. There isn’t much you can do to defeat these opponents, but there is a new card called Cult Neophyte that slightly improves these matchups by possibly delaying your opponent’s removal options by a turn.

Embiggen Druid is a uniquely fast deck, allowing it for a near-permanent space in the Wild Hearthstone meta. The deck seemingly finds new tools in almost every expansion and is something that you simply need to consider each time you face a Druid on the ranked ladder. The Embiggen Druid deck has other benefits for new players due to its extremely low dust-cost. With only two required Epic rarity cards, and the optional legendary card Patches the Pirate.

Adding this deck to your arsenal for the Wild Hearthstone format is a great choice for every Hearthstone player. Whether it’s a cheap deck to try out the format, or as the deck to climb as fast as possible in a new season, it is worth a shot.
For more strategy content, be sure to take a look at our Card Game Dictionary with Maym! Do you want to have your deck featured or work with AceGameGuides on creating strategic content? Email Arend@AceGameGuides.com, and we’ll talk! For more of AceGameGuides, be sure to join the new discord!