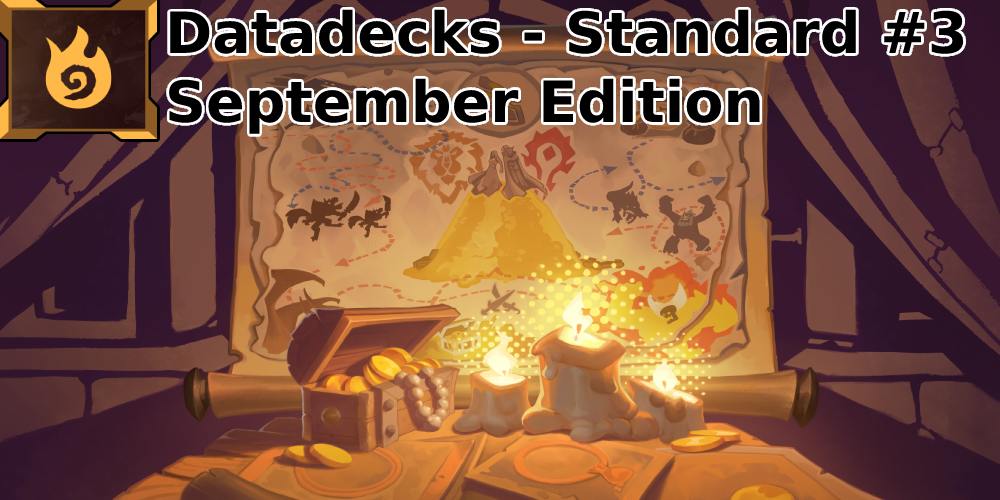 At long last, Datadecks is back! Thanks to the assistance of the FirestoneApp we got the opportunity to continue Datadecks in a new and improved form.
The generation of the meta report has been revamped and improved, with more data than ever before, we hope you like it!

If you enjoy the reports we get to make thanks to FirestoneApp, consider trying their companion App for Hearthstone and Battlegrounds! FirestoneApp has all the functionality you are used to from other companion apps, with several more unique features you won’t find anywhere else. Find all you need to know by joining their Discord or downloading the app at firestoneapp.com.

If you wish to be notified whenever a report drops, or want to view even more infographics, visit the Datadecks Discord or their Twitter.

In our attempt at reducing the load-time of the report, each archetype is separated into its own tab. Do you want to jump straight to your favorite class? Press any of the links below and find it right away!

Hey everyone, while we know nerfs are coming in the next few days, we wanted to make another report to showcase some of the changes we made since our last report based on your feedback. The changes include:

We are always looking to improve, so please let us know what you think!

Warrior remains the least popular class in the United in Stormwind Standard Meta. With only a popularity of 2.9% overall, Warrior isn’t looking good. Several of its most popular decks like Buff, Big, and Quest Warrior continue to struggle, with none of them even reaching the 50% WR mark. The closest, Buff Warrior, sits at a winrate of approximately 47.4%. However, despite being far less common, one archetype stands out for the Warrior Class. Rush Warrior manages to achieve a promising 54.9% win rate over a sample of just over 250 total games. While that isn’t nearly enough to say Warrior is a contender, the archetype is certainly worth further exploration.

To the surprise of exactly nobody, Warlock maintains its control over the Standard (and Wild) format. With a ludicrous sample size of over 16000 recorded games, the deck maintains a win rate of 54.3%, which puts it at the number three spot of the entire format. While the nerfs certainly reduced the win rate of Questline Warlock, you have to wonder if the nerfs did enough to reduce the prominence of the class. Similar to the last Standard Data report, the “Zoo” version of Questline Warlock continues to perform far worse than the traditional build of the archetype.

While everyone is busy complaining about Warlock and Priest, the Shaman class continues to succeed. Three archetypes of Shaman, its two Elemental variants, and the Questline build find themselves at a winrate of between 53.4 and 55.7%, with a significant amount of popularity. Shaman’s position in the Standard meta is interesting. Overall, its archetypes have a solid spread against the possible opposition, each with a polarized matchup into the ever-popular Warlock class. The more popular Shaman versions, Elemental and Quest Shaman, struggle overall against the Warlock Class. However, the “burn” or aggressive style Shaman decks, like Aggro, Elemental Attack, and Evolve Shaman, all perform much better into Warlock, at the cost of losing more to the other meta decks.

Listen, people. Stop playing Bleed Rogue. It’s not working. The Bleed Rogue archetype sits at a winrate of only 43.9% despite having more than 5300 recorded games. Bleed Rogue makes up for over half of all Rogue decks in the Standard meta, but for your average player, there just doesn’t seem to be a lot of good matchups. Like many decks in Hearthstone’s history, some decks should just be left for the “pros.” Instead, try Questline Rogue if you want to scratch that Rogue itch. Questline Rogue has a much better track record and performs better across the board.

Priest overall follows a similar pattern throughout Hearthstone’s recent history. The class is incredible for the experienced players and in tournaments. Yet, the decks struggle when played by the ladder community. Quest Priest, the second-most popular Priest Archetype, sits at a disappointing 44.4% win rate, despite being considered one of the top-decks in the format by many. The other popular Priest archetype, Aggro Shadow Priest, seems much more accessible, having a win rate of 53.3% over a ~6700 match sample size.

Paladin remains one of the less “interesting” classes of the United in Stormwind expansion. However, it is time to start paying attention. The Handbuff Paladin archetype maintains one of the highest play and win-rates of any deck in the United in Stormwind meta. With over 10000 recorded games, the deck maintains the second-highest win rate – 56.7% – of any recent Hearthstone deck. Handbuff Paladin is the deck to play right now on the Ranked Standard ladder. The archetype is easy to pilot, relatively cheap to craft, and extremely powerful overall.

Similar to its Wild counterpart, Quest Mage refuses to die. While the deck is down significantly in both win and play rate, the deck shows signs of life once more. With a 51.4% win rate over ~10750 games, the deck proves to still be a viable choice in the current meta. However, similar to Paladin, there isn’t any diversity to speak of.

As the United in Stormwind meta continues to refine itself, Hunter seems to have lost some of its prowess. Despite that, Hunter maintains its spot at the top of the Standard meta. The two popular archetypes, Face and Quest Hunter, both continue to be great choices. Face Hunter performs better overall, finding itself at the #4 spot in terms of win rate at 54.4%. Questline Hunter, on the other hand, maintains a positive win rate overall, at 51.1%.

The best class in the format, if we look purely at the stats. Its standout archetype, Aggro Druid, sits at a win rate of 57.4% alongside a ~5700 game sample. However, the stats are somewhat biased, as Aggro Druid is a common deck played among the very best Legend players on their race to first or early Legend each month. Despite the slight bias, the archetype is undeniably powerful and worth using to climb in the United in Stormwind meta.

For the previous Datadecks, you can take a look at the previous reports here! Standard (1), Wild (2), Standard (3), Wild (4). Or if you are reading this at a later date, find all you need in the all-new Datadecks Category!