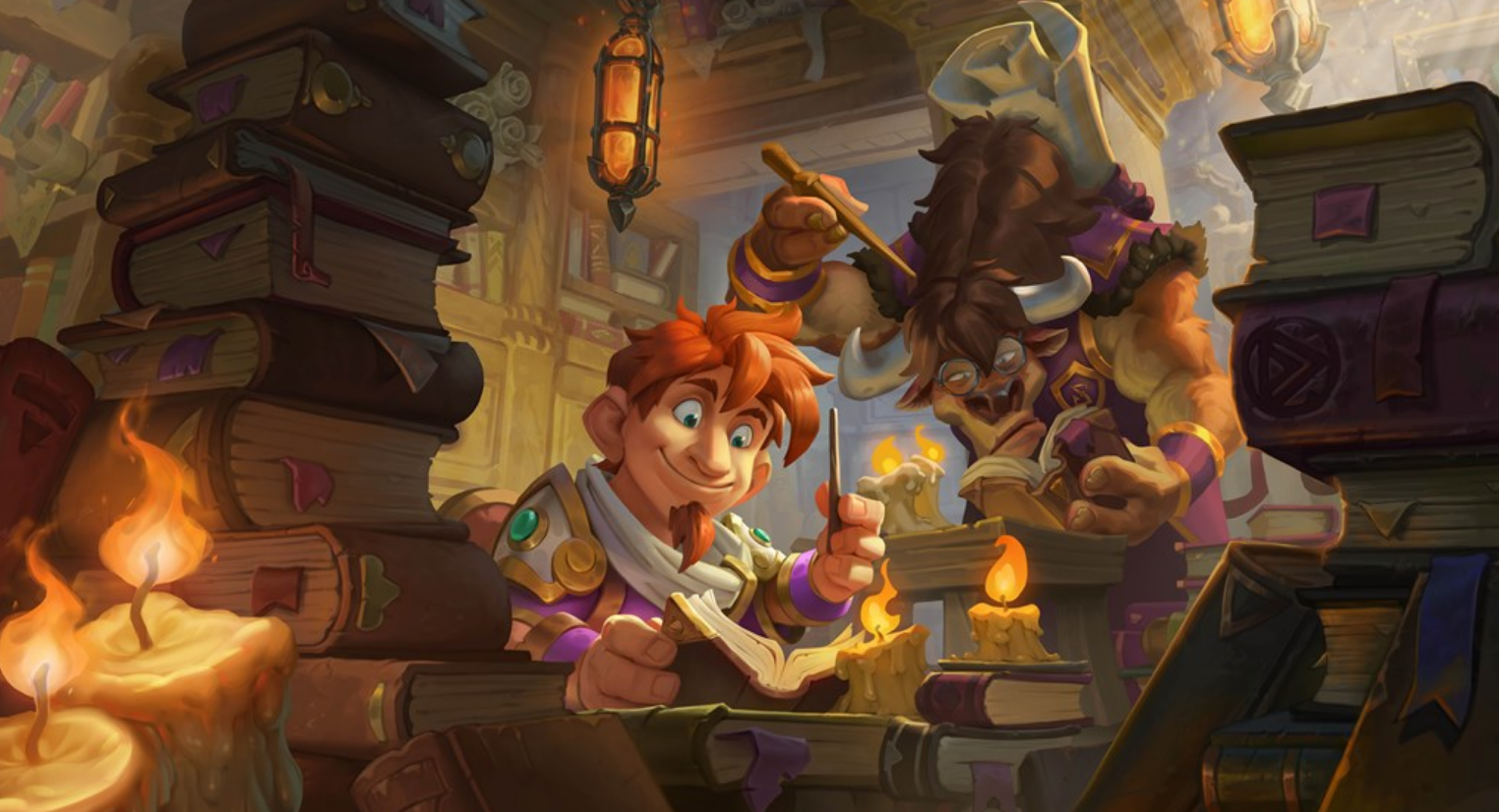 Despite how historical the year 2020 was, it was not without its duller, more routine moments. I was fortunate enough to spend most of the Winter Holiday break with my family and make my New Year’s Resolutions just as I would any other year. Besides the standard commitments to eat healthier and stick to a gym routine, I also pledged to explore a few new archetypes in Hearthstone.

In the past, I have gravitated towards aggressive decks like Pirate Warrior, Discard Warlock, Embiggen Druid, and Kingsbane Rogue because I am more familiar with the playstyle. Additionally, the comparatively low investment these strategies require compared to Raza Priest or Aviana Druid makes them more accessible for someone with a smaller, free-to-play collection like mine. However, little did I know that my innocent New Year’s resolution would result in my adoption and thorough enjoyment of Big Priest!

At its onset, Big Priest centered around the now infamous One Night in Karazhan legendary, Barnes. Originally released at four mana, Barnes allowed players to cheat out minions much earlier than previously possible, resulting in swingy games that were essentially decided by who could play Barnes first. After a subsequent nerf from four to five mana, Big Priest faded into obscurity as the Wild meta moved forward towards stronger, more refined archetypes.

Flash forward four years and a nifty Madness at the Darkmoon Faire epic, Blood of G’huun combined with Scrapyard Colossus, enabled a resurgence in Big Priest that has casual and competitive players groaning in unison at its mindless gameplay. Although most Big Priest player encounters are outside of legend, the archetype is viable in the top 200 legend ranks. Below I am featuring the VS Big Priest list and my own free-to-play list, which cuts the Sphere of Sapience and Archmage Vargoth for Shadow Word: Death and Holy Nova that I reached 95 on the NA server earlier this week.

Stop me if you’ve heard any of these complaints before:

“My Pirate Warrior opponent coined out Ship’s Cannon on turn two and then proceeded to play a Sky Raider that pulled two Parachute Brigands from their hand and Patches from their deck. It’s literally such a mindless deck to play; the deck practically plays itself.”

“Wow, look at this high skill Big Priest player. Congratulations on drawing Palm Reading and Shadow Essence in your opening hand. I guess I’ll just concede on turn four when they coin out Shadow Essence and pull Blood of G’huun into Scrapyard Colossus.”

“So my opponent played Juicy Psychmelon on turn four and then drew their entire combo. They might as well just go play solitaire if they want to play a boring and un-interactive game – I’m trying to play Hearthstone and actually play with my opponent!”

What I find fascinating about the above and other common critiques of existing Wild archetypes is that they persist irrespective of the deck strategy. It does not matter if you elect to play an aggressive, control, or combo strategy, all of these decks can be grouped under “mindless play.”

In this article, I hope to demonstrate how many critiques of mindless play are instead the result of failing to consider each player’s initiative and how initiative changes as a function of the particular matchup.

Initiative is the distinction between the deck that sets the game’s pacing versus the deck that responds to that pace. In a more everyday sense, initiative is the difference between the aggressor and the defender. Take, for example, the matchup between Pirate Warrior and Aviana Druid. As the Pirate Warrior, I want to mulligan for the most aggressive opening hand possible. I can pressure the Druid opponent to deal with the board state I create rather than assembling the one-turn-kill combination. On the opposite side of the table, as the Aviana Druid player, I am looking to mulligan for a hand that strikes a balance between board-control tools like Spreading Plague and prioritizing key cards to assemble the combo.

If we alter the matchup, however, Aviana Druid can transition from the defender to the aggressor. Against a Mill Rogue deck, the Druid now has to mulligan aggressively for the key combo pieces to ensure they don’t lose their critical cards to the overdrawing mechanics. Conversely, the Rogue player should prioritize its mill pieces because its fatigue game plan presents an inevitability that the Druid does not have the tools to resolve. Taking these two examples in stride, we can further refine our understanding of initiative beyond our initial description to add that initiative can be defined as the deck, which will win the game first if allowed to play uninterrupted. How then can we utilize our understanding of initiative to win more games, and more importantly, how do we hold onto initiative once we have it?

In most matchups, the initiative is set from the onset of the game. If we return to our original example, the Pirate Warrior begins with initiative simply due to its hyper-aggressive game plan. Furthermore, the deck has more pieces to interact with since most of its damage comes from playing minions. As the game progresses, however, there are opportunities for the opponent to regain some of the forfeited initiative.

Similarly, the less the Pirate Warrior invests into the board, the less initiative the Aviana Druid player will gain. Of course, there is a limit to this – if the Pirate Warrior does not invest enough onto the board, the pressure will be low enough such that the Aviana Druid player will regain initiative because it will win first.

To mitigate this unnecessary loss of initiative, veteran aggressive players learn to invest the Goldilock’s amount of pressure onto the board, not so much that a simple board clear will prevent them from coming back, but not so little that the opponent is allowed to play unencumbered. A common mistake that novice aggressive players make is that they invest too much into the board and then become frustrated when their opponent invalidates their board state with one card. While Druid is certainly notorious for Spreading Plague, players are likely much more familiar with Priest, Warrior, and Warlock board clears.

Cards like Mass Hysteria, Psychic Scream, Breath of the Infinite, Spirit Lash, Brawl, Defile, and Twisting Nether are alike beyond just the fact that they can be aggravating to play against; they grant more initiative as a function of the extent to which the opponent invests into the board.

Learning to play a variety of archetypes is then necessarily dependent on understanding your initiative at the beginning of the game and how you can leverage that standing to your favor as the game progresses. One of the most difficult aspects of learning how to play Big Priest was learning how to mulligan against aggressive strategies and when to play certain board clears.

Because Big Priest lacks any formal card draw beyond a generated Mass Dispel, playing board clears at inopportune times reduces the initiative I regain. Throughout a game, it can result in unwarranted losses. Whether you enjoy playing aggressive decks, controlling decks, or combo decks, I implore you to take the initiative and hold onto it until your opponents’ portraits explode!

For more unique Hearthstone content, be sure to take a look at our recent Wild Streamer deck collection by Gerben! Do you want to have your deck featured or work with AceGameGuides on creating strategic content? Email Arend@AceGameGuides.com, and we’ll talk! For more of AceGameGuides, be sure to join the new discord!