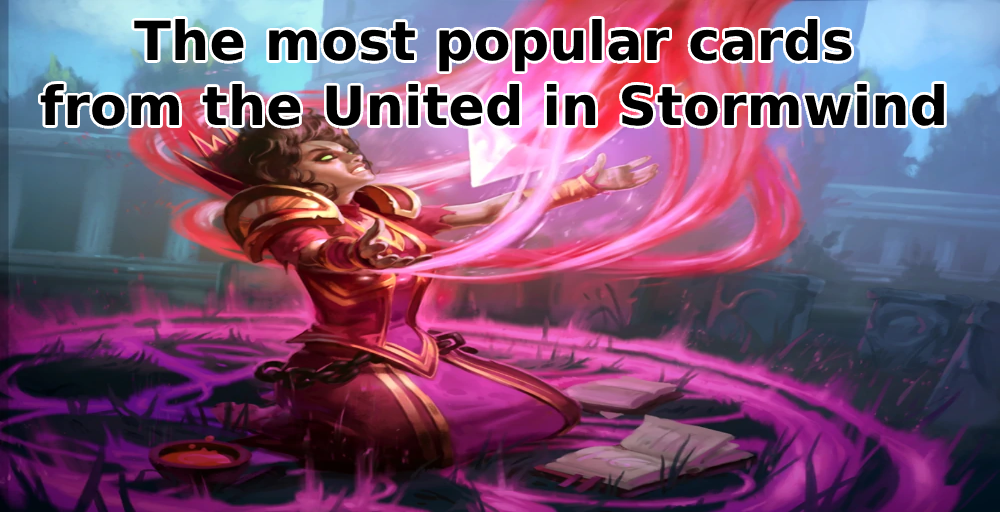 WiWith the help of the FirestoneApp, we explored the most popular inclusions of the United in Stormwind expansion since its initial release. While many of these cards saw change throughout, several winners stood out above the rest. Let’s explore the 19 most popular United in Stormwind cards. With yet another large update on the horizon, we’ll delve into how the changes may affect the Wild Hearthstone format tomorrow.

Rustrot Viper takes #17 on the most played UiS cards, appearing in 3.76% of all Wild Hearthstone decks since the expansion’s release. Rustrot Viper’s strengths come from its flexible role as a tech card and overall reasonable minion. Compared to the previous weapon removal tools, like Gluttonous Ooze or Acidic Swamp Ooze, the additional benefit of the Tradable keyword makes it the go-to anti-weapon tech. Several popular archetypes experiment with the inclusion of Rustrot Viper. Among them are Odd Hunter, Ignite Mage, and Discard Warlock.

Stormwind Freebooter, Cargo Guard, and Shiver Their Timbers! are the #16, #23, and #26 most used cards from UiS, with them seeing play in 3.8%, 2.4%, and 2.2% of the decks, respectively. Stormwind Freebooter stands out from this package, mainly due to its use in the most popular version of the Questline warrior deck. The two other cards see less play in that particular archetype, but they are common inclusions in different builds of Pirate Warrior. Notably, both Shiver Their Timbers! and Cargo Guard were among the tools used in the early-expansion version of Questline Odd Warrior, a still decent deck outshined by its non-odd counterpart.

Encumbered Pack Mule – The minion that does it all

Spice Bread Baker is the 14th most used card from the UiS set, used in 4.1% of the Wild decks. Spice bread baker is very reminiscent of the Antique Healbot from Goblins vs. Gnomes. Only this time costing only four mana, instead of five. The mana difference matters more than you might expect. As the cost of Spice Bread Baker is now even, rather than Odd, decks like Even or Even Reno Warlock can include the tool. That is exactly where Spice Bread Baker found its’ home. However, that is not to say that Baker only gets used in these decks. In addition, decks like Cunjurer’s Calling Mage or even Reno Shaman like to experiment with the card whenever they can avoid the Warlocks.

Ignite and First flame are the #12 and #13 most played cards from the UiS, seeing play in 4.4% and 4.3% of the decks, respectively. These cards primarily fit the needs of the Ignite mage archetype. While Mage saw a significant downturn in popularity after the nerf to several of its favorite tools, there is still a dedicated following for the Ignite Mage archetype. Speaking of which, two other Ignite Mage tools, Sanctum Chandler and Hot Streak, occupy the #18 and #21 spots in the United in Stormwind set, with 3.5% and 2.7% inclusion, respectively.

Darkbishop Benedictus, Twilight Deceptor, and Voidtouched Attendant are the #9, #10, and #11 most played cards, with them seeing play in 4.7%, 4.57%, and 4.5% of the decks, respectively. Obviously, the package of three cards only fits into one archetype: The Shadow Priest archetype.

It’s the first time in Hearthstone’s history that an aggressive Priest archetype exists and thrives. The archetype works well together with its various synergistic tools. Twilight Deceptor, for example, is nearly active at all times due to a large number of aggressive tools in the deck. Those aggressive tools benefit from Voidtouched Attendant amplifying their damage by one. However, the whole archetype wouldn’t be possible to thrive without its star, Darkbishop Benedictus.

Aimed shot and Defend the Dwarven District are the #5 and #6 most played UiS cards, seeing play in 8% and 7.5% of the decks, respectively. There is a 0.5% difference between the two cards, mainly due to Aimed shot seeing some play in the other Hunter archetypes like Odd and Face Hunter. Defend the Dwarven District is a deck-defining card. In combination with Baku, the Mooneater, Defend the Dwarven Instinct gives Hunter a solid, straightforward gameplan: use spells, get Brann, burst the opponent down. The spells and intermediate rewards gained from the Questline are very versatile. You can use these to control the board, or you can simply push more damage instead.

Raid the Docks and Harbor Scamp are the #3 and #4 most played cards from UiS, seeing play in 8.1% of the Wild decks. Harbor Scamp does see some play in some Pirate Warrior decks that don’t include the questline, but from all data, it is clear that the questline is the way to go for Pirate Warrior. Historically Pirate Warrior found itself dealing with the issue of running out of steam. However, now with Raid the Docks, you can reliably find your “refills” like Ancharrr and the Juggernaut; these problems get largely eliminated. With tomorrow’s removal of Questline Warlock, Pirate Warrior is looking better than ever to take on the United in Stormwind Wild meta.

The Demon Seed and Touch of the Nathrezim are the #1 and #2 most played cards from UiS, with them seeing play in 16.6% and 16% of the decks, respectively. The main reason for them not having the same rate is that early in the UiS meta, players did not include Touch of the Nathrezim. But players quickly found out that Touch was an auto-include for the Demon Seed Warlock deck. Ever since its release, The Demon seed has been terrorizing Wild, with it seeing play in nearly a fourth of all decks in the diamond-legend refined UiS meta. Questline Warlock was by far the best deck in Wild in recent times. However, breathe easy, as the Demon Seed is no more in the Wild format with tomorrow’s game update. With both a nerf for the Standard Hearthstone format, and an all-together ban from the Wild format, it is the end of Questline Warlock.

Tomorrow we’ll explore how the changes affect the remainder of the United in Stormwind meta by looking at how Warlock’s removal from the meta would affect the current popular archetypes.