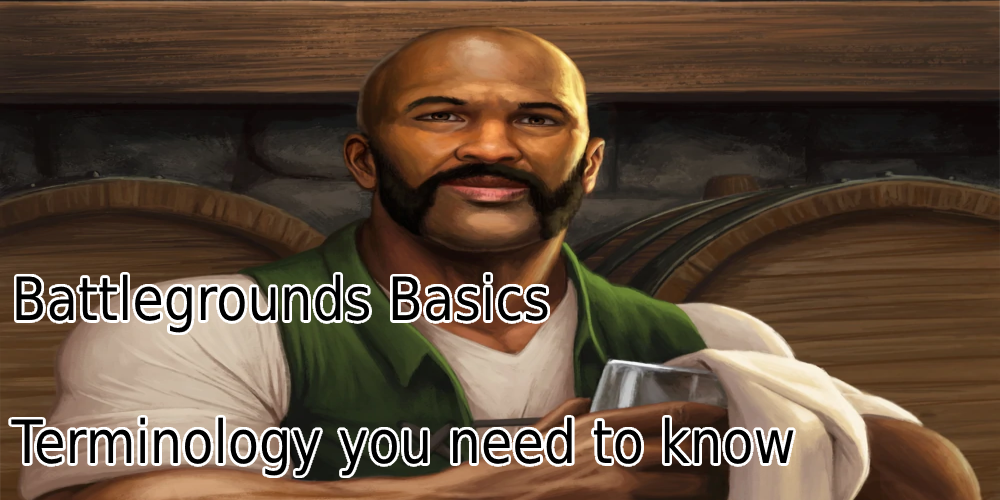 When you first learn Battlegrounds, the number of themes and phrases can quickly become overwhelming. Here are the 25 most important phrases for you to learn when first starting the game.

What is the most optimal for success right now? For example, Jandice Barov is meta because of her ability to create value and strength from her hero power.

Keeping up constant strength and focusing on your current power level instead of investing in the future turns. For example, when tripling for a T6, you might have a choice between Lil’ Rag or Ghastcoiler. Lil’ Rag is great for value and for the long run as it can give you a lot of stats throughout the game. However, Ghastcoiler gives immediate strength. While it is not a late-game win condition, it gives you more power than Lil’ Rag provides in the upcoming fights. When choosing between the two, you have to think about what do you need more: a minion like Lil’ Rag that gives you a direction and a game plan or Ghastcoiler, a card that makes your board stronger in combat but does not give you the direction to make it out into the late game. If you focus too much on tempo, you may fall off in strength because you did not invest enough into value to make it into the late game, possibly resulting in a loss at 5th place.

Making decisions that will help you in the long run and be beneficial to your end game plans. For example, upgrading to T6 when it cost nine gold is a lot of value. You will have access to all of the late-game cards, you no longer need always to find triples, and you have an extra choice in the recruitment phase. However, you spent nine gold doing nothing, resulting in a negative tempo. While it’s a valuable decision, you could lose the next fight because you did not keep up your tempo. If you focus too much on value, you may lose too much health losing fights and get  8th place despite getting an early win condition.

Always try to keep a balance between tempo and value. When choosing them, you have to consider what your opponents are doing.

A minion that generates a lot of value for the future but is not strong in combat. For example, Alleycat is a great value card because it gives you extra economy in your upcoming turn but loses in most early turn fights.

A term taken from the constructed mode of Hearthstone and doesn’t really apply well in Battlegrounds due to the random combat system. It is when a minion attacks an enemy unit in a way that is severely in your favor. For example, a 4/1 minion destroying an enemy’s 5/4 minion rather than attacking the other weaker minions.

Making a play that is suboptimal but will be valuable in the long run. It is normally used when you focus more on the value choices than tempo. For example, you want to upgrade and buy your triple, but you lack gold, so you choose to sell minions to do so. While you do get a powerful tier 6 win condition, you may be punished by your opponent’s stronger board and could lose all of your health.

When you are making a play that has low risk and a small reward. For example, you find a triple at turn six (normally tier 3 and 8 gold). Playing safe would be tripling now for a T4 or choosing to buy the other minions instead of that so you can upgrade and buy it next turn.

When you are making a risky play in hopes of a big reward. For example, you are the last two players with your Groundshaker build. You make as much Blood Gems as you can and even sell your Captain Flat Tusk for a better combat minion in hopes you defeat your opponent now. If you lose or tie, you no longer have any resources to help you even fight in the next combat phase.

Action Per Minute. Term coined from Starcraft. It describes how much a player can do during their recruitment phase. When something is called an APM Build (I.E., Cap’n Hoggarr, Flat Tusk, Brann, etc.), it describes a composition that takes a lot of actions balancing between buying, selling, and playing cards within the time allowed for you.

When a player is constantly successful in their plays. For example, they found all the triples they wanted at the right time or discovering the perfect minion they need for their composition.

When you are stuck with a build that has no late-game future. For example, builds like Soul Juggler loses to typical late-game compositions such as Kalecgos Dragons, Menagerie, and Elementals. However, they can easily defeat builds working towards late-game compositions. You may not get 1st or 2nd place, but you can still manage to land on 3rd and 4th.

Focusing less on trying to high roll and doing constant safe plays by focusing on tempo. For example, you throw away your pairs and potential triples to create a different composition from the minions at tiers three and four.

Making risky decisions that could benefit you greatly if they work out—for example, upgrading your tavern tier earlier than others or rerolling the shop to get the best cards instead of getting slightly worse alternatives.

Put yourself in a position to high roll

You have the keys to high roll but are putting yourself in a risky position in hopes of huge success, for example, holding multiple pairs, ignoring your Warband strength in favor of trying to find ways to triple for a tier 5 or tier 6. If you got three pairs but it cost 8 to upgrade to tier 5, then upgrading now and hoping to find all of the triples is trying to put yourself in a position to high roll.

Getting triples within the first three tiers and not playing the golden minion, instead deciding to hold onto that minion and choosing to play it once you hit tier 4 or 5. The reason for this is finding a powerful late-game card and building off of it before your opponents have access to them. You may lose a lot of health for it, but sometimes it’s worth it.

Battlegrounds does not give you enough time in your recruitment phase to choose, play, and think of what to do in your turn. The time limit is difficult, especially when you are playing an APM build.

Use this guide to see how you can get an extra 20-30+ seconds on your turn.

The minions on your side of the board.

Compositions that have a strong power spike you can create during turns 5-9. They normally can fight well against most builds during this time but will fall off once the late game (turns ten and after) begins as players find the best end game win conditions. For example, Qiraji Harbinger’s taunt composition is mid-range. They are powerful in the turns before the end game, but unless they have a minion that can scale up, they will be unable to compete against end-game builds.

When the shop offers minions that look like a good decision, but ultimately are the wrong play.

Switching your game plan into another. For example, you have a board of Groundshaker Quilboar, you tripled into a Brann Bronzebeard, and your next roll offers you a Murloc and two Primalfins. Replacing most of your minions with Murlocs and using Brann and Primalfin to change into a new build is called a transition. Results may vary, depending on how you do this.

The ability to grow in stats infinitely. For example, Kalecgos Dragons can scale infinitely as long as you keep playing battlecries. Beast builds don’t scale much because the minions that give them stats (Mama Bear, Goldrinn) have a cap on how much stats their effect gives you.

Putting a weak minion in the far left to hit a divine shield minion.

How you would go about playing the beginning curves of each game. For example, Jeef curve, Shinese curve, Rafaam curve, standard curve.

Your invisible ELO/MMR that you cannot see, which never resets. The metric estimates your current skill level and to match you up with people around the same skill as you.

For more of My Battlegrounds content, follow on Twitch, Twitter, or join our discord! Looking to learn more about Battlegrounds’ strategy? Why not read our latest strategy article covering the basics of Battlegrounds’ Tribes & Minion Keywords, The importance of buying the right minions, Warband Counter Basics, and the Turn-one minions.

For more – Why not look at Freezing & Triples, and Gold Spending Basics.