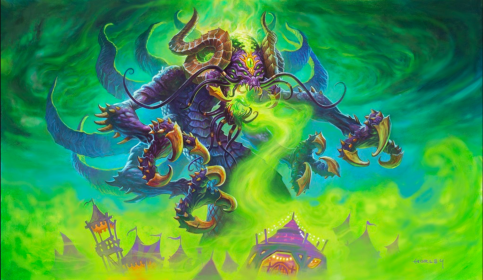 This build of Aggro DH focuses on some of the newer tools the archetype got. The new “draw and play” cards add more support to a hyper-aggressive Glide variant to the deck, which is why I run two copies of them and glide alongside Altruis and Kayn at the top end.

Glide may well be very strong, with the recently printed late-game threats leading to a potential rise in control decks that hoard cards early on. Stilt-Stepper and Acrobatics offer good refuel as well as massive upsides if their effects activate. While the direction I took with this build may be wrong, the deck has potential.

Why run only one Old God when you can plausibly run two? Quest Druid always has the facilities to draw through its deck with speed through cards like Nourish and Overflow. The quick mana-ramping makes C’thun the Shattered a viable consideration.

And of course, Yogg Druid has returned, and a deck built primarily around mid-game token boards and drawing the deck could use Yogg as a finisher. The Double-God Druid deck looks ready to counter any control deck you queue into between its midgame power and late-game finishers.

The rest of the deck centers around the foundations of Ramp Druid, and your late-game threats are devastating. Kael’thas is a consideration to improve early-game blowout potential, but his utility is limited since the nerf. Finally, Umbral Owl is

This deck seeks to abuse Maxima as much as possible while also retaining some semblance of an early game. Tonk is a very strong card, and Octosari offers a refill in a class that can’t draw, as well as dealing eight damage to the opponent’s face. Colossus deals as much as Tonk while also offering a strong taunt after being summoned. Nine Lives and Jewel of N’Zoth offer additional boards after playing Maxima. The deck probably suffers from the risk of not drawing Maxima by 6, so a fairly hard mulligan is likely required.

Secret Mage returns to Standard format, but the real question is how it will cope without Kabal Lackey, Explosive Runes, or Aluneth. Sayge, Seer of Darkmoon, offers a replacement to the latter card, as it offers incredible draw potential in the mid-game and is still a strong card on 6. Also, unlike Aluneth, Sayge offers tempo, which the deck may well need to overcome aggressive opponents.

Lab Partner is in to fill the deck’s 1-drop void, and also due to its synergy with Fireball. Rigged Faire Game is an interesting card, but I don’t believe it makes the cut because it is a massive liability against aggressive opponents. It could end up being a slightly better Sanctuary. I include Mirror Entity due to a lack of tempo-positive secrets. Polkelt places your top-end of burn damage and draw on the top of your deck, making Sayge more consistent.

While a lot of the attention last expansion was on Libroom and Pure Paladins, Aggro Paladin was not far off, lurking in the background. The new Silver Hand Recruit support and Oh My Yogg!, could push the deck over the top into a respectable position in the Darkmoon Faire meta.

This theorycraft cuts Alura in favor of more early-game spells with greater dude support. Lothraxion serves as a top-end alongside Blessing of Authority, and the deck’s low curve allows it to run Voracious Reader for a refill in the mid-game.

I pray this deck comes nowhere near playability, yet I know that won’t stop certain extremely loveable individuals from spamming this deck on the ranked ladder. My take involves two copies of Colossus to provide a potentially back-breaking play on eight against aggressive opponents, as well as offering a very strong target for resurrection. Palm reading allows you to play Blood and Mass Resurrection one turn early, which can be very impactful against any aggressive decks. Wowwwww…

This deck revolves around playing Deck of Chaos on curve and winning the game in the following turns by cheating out big minions. The corrupt mechanic fits naturally into this deck as it runs a lot of high-cost cards, and Y’Shaarj offers great refills in the late-game.  The ability to run classic dragons as they will be heavily discounted means that Nether Breath is consistent, giving the deck the healing the Warlock class desperately needed in Scholomance.

Between Foxy Fraud and Swindle, this deck received insane support from Blizzard this expansion. Swindle is almost always a two mana draw two in a deck that revolves around combo effects. Foxy Fraud doesn’t even face a stat punishment for providing incredible early game mana cheat, especially with Shadowstep and Edwin. While Tenwu is an option, the deck doesn’t run enough high-cost minions to abuse it properly. The Ticket Master package adds some additional draw and board development in the mid-game (think Faldorei Strider, but you can tutor the Spiders).

Yes. I made this deck. While I don’t expect it to be particularly strong, I think it will be fun to play, and Ringmaster Whatley looks very solid in Warrior. His best use could be in a N’Zoth Warrior deck or in a purely aggressive build, but the synergy between Baton and Scion of Ruin looks pretty funny, even if it fails to be effective. Sword Eater is a card I would love to run, but five weapons is already a lot – and they all have much stronger effects than Fiery War Axe. Stage Dive is a great card that also works great with Scion and pulls Tent Thrasher, which is another great card.

This deck is unlikely to be more than a meme, like 90% of the decks posted here in all seriousness. However, it could be a fun burn deck to play in a control meta, as Y’Sharrj stops the deck from ever running out of damage. Even if you don’t get Tour Guide the turn before, Y’Sharjj still gives you eight damage and a massive tempo swing, or 16 damage the next turn.