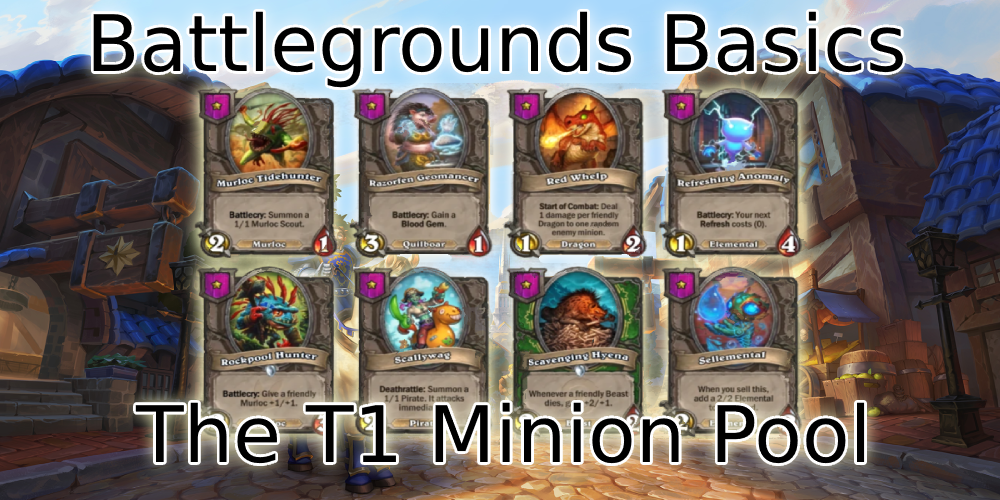 Understanding the strengths of Tavern-Tier one units

The best options for Tavern-Tier one, in nearly every situation, are the so-called “Token Generators”. The three primary Token Generators include Murloc Tidehunter, Alleycay, and Sellemental. While Deck Swabbie is similar, it’s more limited than the other options. Deck Swabbie’s battlecry reduces the cost of your next Tavern-Tier upgrade by one. As such, for Deck Swabbie to have the same impact as your other token generators, your mana and upgrade timing has to work.

Deck Swabbie performs best, if you find him in the first round, after you upgrade to T2 on the second round, as it gives you the most flexibility to reach T3.

One of my favorite turn-one options people like to forget, especially when I plan to follow the standard curve. (For more on everything curves, take a look at our Battlegrounds Curve cheat sheet.) SunBacon Relaxer performs well in situations where you don’t find one of the Token Generator minions as it improves your chances of winning in rounds three, four, and five with the extra stats the Blood Gems provide.

The remaining T1 units still have their strengths and benefits. Since you won’t always get your ideal start, it’s important to know what make the remaining options worthwhile.

Acolyte of C’Thun is one of the best units from T1 combat-wise, arguably as strong as a Tavern-Tier two minion. Micro Mummy buffs your other minions, and fits certain strategies better than others. The Shinese or Warrior Curve benefits tremendously from Micro Mummy and Acolyte of C’thun, as the two together provide a large amount of immediate strength.

Wrath Weaver fills the role of being the earliest to choose win condition in the entire game. Wrath Weaver & the Demons strategy performs better at the lower ranks of Battlegrounds as people are less likely to respond with counters like Poison units. Despite that, Wrath Weaver and the commitment to Demons so early on comes with a lot of risk, both by limiting your options to pivot later and by the strain on your life total. However, with those risks comes the ability to scale your stats faster than any other Tribe, which means you likely win most of your rounds until the late game.

Battlecry minions like Razorfen Geomancer and Refreshing Anomaly fit a similar utilitarian niche. Picking up a Razorfen Geomancer on your first round might make the difference between winning or losing a fight later in the match. For example, using the Blood Gem the Geomancer provides grants you extra stats when you use it on a unit like Tough Tusk or Groundshaker.

On the other hand, Refreshing Anomaly essentially works as a bad token unit, of which the extra gold it provides only works on rerolling. Refreshing Anomaly, since it’s buff to a 1/4 is a unit I’ve started to pick up more frequently early on when my other options are too weak. That way the free reroll provides me with more options later in the game. Especially on Millhouse Manastorm purchasing Refreshing Anomaly works out well, due to Millhouse having to spend two gold instead of one on rerolling due to Manastorm’s drawback.

While there are some other options available in the Tavern-Tier one pool, they have no utility and don’t serve any purpose. Unless you have no other option, avoid buying those units.

For more of My Battlegrounds content, follow on Twitch, Twitter, or join our discord! Looking to learn more about Battlegrounds’ strategy? Why not read our latest strategy article covering the basics of Battlegrounds’ Tribes & Minion Keywords & The importance of buying the right minions.