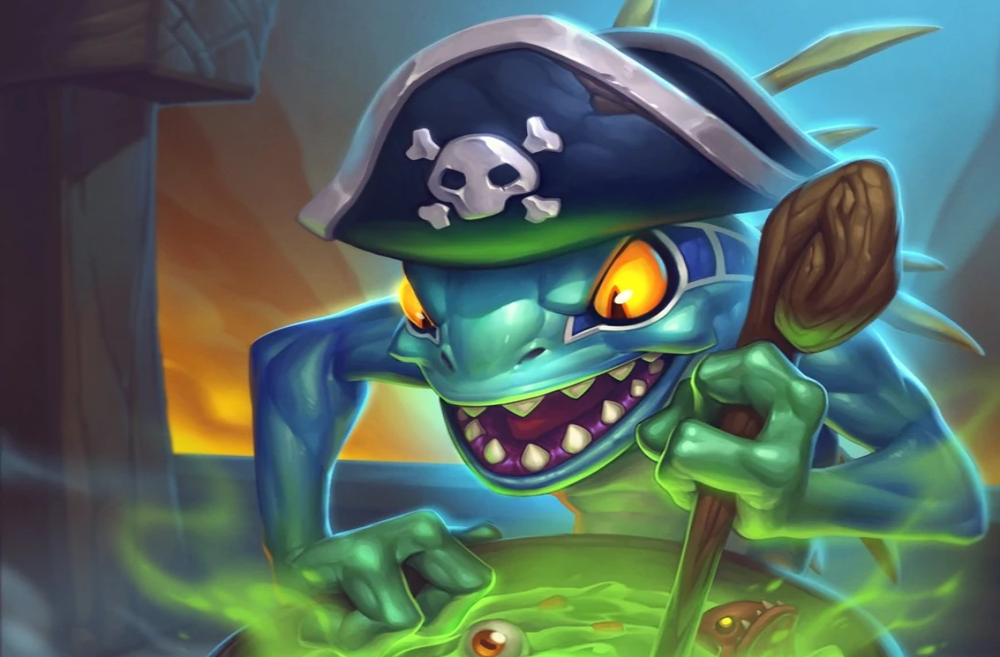 To start the guide to Cookie, the Cook, there is one thing more important than anything else. Yes, you can use your hero power on Bob’s board!
With that out of the way, Cookie is the last hero from Patch 21.6 we will discuss. Amongst Diablo and Sneed, Cookie may not seem as strong, but once you understand how he works, you will recognize Cookie as an incredibly powerful hero in Battlegrounds.

Stir the Pot states: Throw a minion in your pot. When you’ve gathered three, Discover from their minion types.

What this means for Cookie the Cook is that you will get a free minion at turns three, six, nine, and so forth. There are very few situations where you will be stuck with only neutral minions, but if that does happen, consider rerolling. To make sure your choices are optimal, try to use your hero power on the same tribe as much as you can.

While you may think it’s better to be diverse, that increases the chance of getting a lower-tier minion of those tribes. Depending on what curve you do, you are trying to get the best possible minion for your situation.

Unlike our other guides, we include the curves section first, ahead of the gameplan section, making it easier to understand the goals and options during the game.

The Warrior curve takes similar advantage of your hero power, giving you consistent choices. Since every tribe has two choices for T1 minions, it becomes easy to find potential triples.

If the card is the third copy for a triple, make that triple but do not play it. We may lose the round, but we can make up for the loss with minion advantage in the coming fights. If none of these apply, just pick the best minion offered.
Turn four (6g) – Buy two minions. Again, if you run out of space, do not be afraid to hold minions in your hand for the time being. If you got any triples, hold them for the next turn so you can discover a T4.
Turn five (7g) – If you previously picked a Deck Swabbie, upgrade twice. If not, sell one minion and upgrade twice. Use your hero power on a minion on Bob’s board. If you have one play your triple card and discover for a T4 minion.
Turn six (8g) – Depending on the situation, you can choose to upgrade straight to T4 (if you have the strength or health advantage). Otherwise, you can choose to stay on T3 if necessary.

Turn seven (9g) – You should be at T4 by now. Use your hero power once more and choose the best card from your Discover.

Now that we have gone through the two primary curves let’s discuss strategy. Consistency is key. If you hero power a Murloc, Pirate, and Quilboar, your chances to find the best cards of any of those tribes lessens. That is because Discover only offers unique choices. So, if you have a Murloc, Pirate, and a Quilboar, you have three sets of minions from tavern one to three, giving you many options of T1 and T2 units you don’t want.

Instead, if you choose three of the same tribe, you only have maybe six or seven total options between T1 and T3, of which you get to choose from three units. That drastically improves the average strength Discover you get from Cookie the Cook’s ability.

If you want to do the three-on-three curve, your best choices are to use your hero power on Mechs, Dragons, Pirates, or Quilboar. For example, Mechs can give you cards like Pupbot, Deflect-o-Bot, or Replicating Menace, which leans to strategies involving Divine Shield.

In Replicating Menace’s case, it supports Avenge cards.
Dragons are a powerful choice because they only include one T2 unit, alongside two T1 units. That allows you to nearly guarantee to get a T3 unit following the three-on-three curve , with a similarly high chance at finding one of the strong dragons like Tarecgosa and Bronzewarden.

[Editors note: Discover’s of Cookie aren’t equal chance, and as such the previous 95-80% math is incorrect. The actual numbers are slightly less overall, depending on the available units in each game.]

Pirates, while not going to a proper win condition, has decent cards with combat strength like Southsea Captain, Yo-Ho Ogre, and Salty Looter. The real reason you want to pick pirates is getting an early Briny Bootlegger. The extra coin can go a long way. However, Pirates are not as consistent as the past two tribes.
Quilboars has mostly good choices, with only the T1 cards being weak.

Thorncaller and Banner Boar are powerful cards, and Gemsplitter leads into its unique type of build. Roadboar and Tough Tusk are pretty weak, but they are not the worst choice in the game.

However, if you’re doing Warrior curve, your focus is on any tribe. As previously stated, each tribe only has two minions on T1. For example, if you buy a Sellemental but use your hero power on a Refreshing Anomaly twice, you can guarantee that one of your choices will be a Sellemental. The strategy makes Cookie a powerful user of the warrior curve, almost on the level of someone like Captain Hooktusk.

Nevertheless, there is a problem with having too many minions, which could definitely happen when following the Warrior curve. Similarly, you may find yourself in a situation where Bob offers Acolyte of C’Thun and Wrath Weaver two cards that your hero power does not want to eat. Consider rerolling or using your hero power on a token if necessary in these situations.

You will not gain any gold if you use the latter, but it may be worth it if you have trouble effectively using your hero power. Since we are in a meta that emphasizes T4 minions, the ease at finding triples with Cookie makes him very effective and is one of the reasons why he is such a powerful hero right now.

What to do with your ability in the later rounds.

Pirates have minions like Deck Swabbie and Freedealing Gambler. Two cards with effects that are always beneficial. Similarly, the Murloc Tribe has Murloc Tidehunter, sometimes providing two gold. Primalfin Lookout is also not bad if you need help transitioning or finding Amalgadon.

Elementals have Sellemental, Tavern Tempest and Refreshing Anomaly, three cards that basically give you free two (or more) gold.
Beasts have Alleycat and Monstrous Macaw. Alleycat can be two gold, similar to Murloc Tidehunter, while Monstrous Macaw can fit into builds like Omega Buster Mechs, Impulsive Trickster builds, Nadina Dragons, or Selfless Hero compositions. Last, Quilboars have SunBacon Relaxer and Razorgen Geomancer, which are always nice to get free stats.

Cookie, while not as flashy or scammy as his contemporary heroes: Diablo and Sneed, he is definitely one of the best heroes in the game. His ability to be flexible and get free cards makes him a hero of which to be afraid. There may be some confusion on how to play him since I have seen many players struggle to make him work, but I hope that this guide helps you understand what Cookie needs to be effective. Thank you for reading the guide, and I hope to see you all climbing.

For more of Mewwy’s Battlegrounds content, follow on Twitch, Twitter, or join our discord! Also be sure to read Mewwy’s previous guides, covering all you need to know for Fungalmancer Flurgl, Diablo the Lord of Terror, and Sneed.