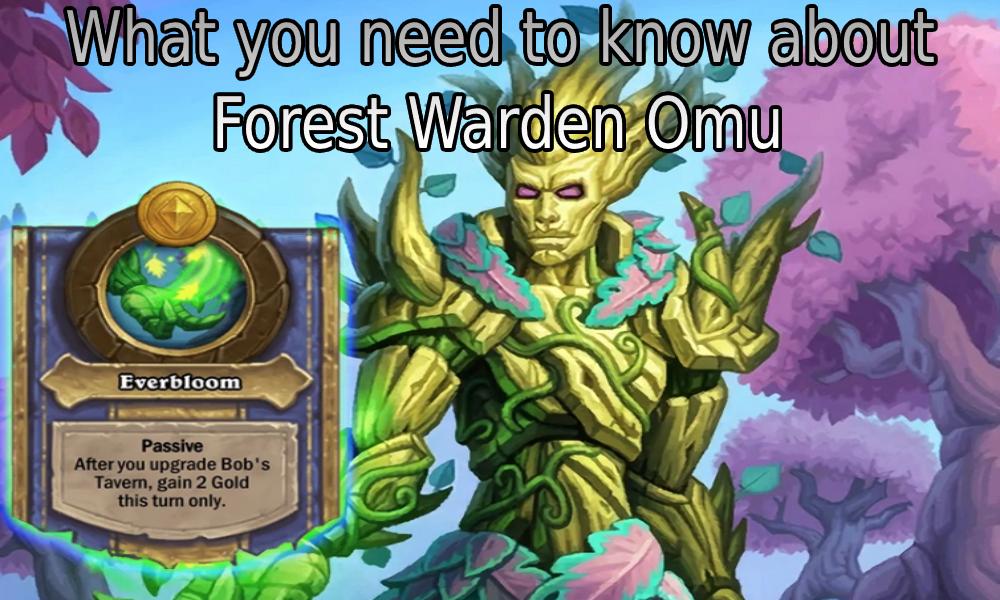 Forest Warden Omu is one of the most dominating heroes in Battlegrounds. However, not many players know how to play her optimally. Forest Warden Omu’s ability, Everbloom, gives you two extra gold every time you upgrade to the next Tavern-Tier.

The extra gold allows you to have a more flexible curve while raising your Tavern-Tier faster than almost all Battlegrounds heroes. By ramping fast and finding the strongest cards in the game, it is no question why many consider Forst Warden Omu amongst the best Battlegrounds heroes of all time. Let’s break down what we need to know about Forst Warden Omu and how to succeed with Everbloom.

The Basics of Forest Warden Omu

As previously stated, Everbloom gives you two extra gold whenever you upgrade to the next Tavern-Tier. While the other heroes lose tempo by spending their gold on upgrading, Omu is an exception and can, in most cases, purchase at least one extra minion while upgrading. The extra tempo that grants you allows you to upgrade more safely and faster than anyone else.

By ramping fast, you can access cards from the higher tiers before anyone else. Forest Warden Omu’s primary strengths come in two ways: First, stabilizing your board with minions from Tier Four while everyone else is still trying to create a proper Warband. The second is finding one or more triples and leveling to the Tavern-Tier five or Six to get a composition dictator unit to work towards an end-game Warband ahead of anyone else. The difficult part is getting to that position, so let’s discuss that next.

Finding pairs and triples is the name of the game when it comes to Forest Warden Omu. While most heroes lose tempo if they find a triple (too) early, Forest Warden Omu doesn’t have that problem. Within the first seven turns of a game, it is your goal to find as many triples as possible. Of course, that much is obvious to most heroes. Because you can upgrade so freely, not only will you find a Tavern-Tier five-or-six unit before everyone else, but you will be able to purchase a minion with the extra gold from your hero power. I’ll explain this in the upcoming curve layouts.

Now let us just say you weren’t able to find any triples. You still can ramp faster than anyone else. You will be at Tavern-Tier four by turn four, five, or six.  Normally that is way before everyone else, which means you can find powerful cards such as Bonkers, Qiraji Harbinger, Savannah Highmane, Ring Matron, Deflect-o-Bot, and Mechano-Egg. In contrast, the other players are stuck in the lower tier. Once you feel strong enough, you can upgrade and look for triples to discover a powerful Tavern-Tier six unit or to pick up a win condition from Tavern-Tier Five instead.

For Forest Warden Omu, the unit Deck Swabbie functions the same as any other token. You can play it on the first turn and have no issues following the Token Curve.

The token start is ideal for Omu and is what you want to follow whenever you have a token generator ready. You will have the level advantage and still keep up with the number of minions your opponents will have.

The non-token start is primarily a backup strategy that is still quite strong since you will be using the first three turns to find a potential triple. While not ramping as fast nor having as strong minions as the previous curve, you rectify that by playing catch up and having a better chance at finding triples.

The fast-upgrading curve is only for when Bob hates you and offers nothing but bad cards. You take a large amount of damage from doing this, but you can easily come back with the powerful higher-tier minions you will find.

Turn One (3 Gold) – Buy the best Tavern-Tier one minion available.
Turn Two (4 Gold) – Upgrade to Tavern-Tier two. Sell the minion for a better Tavern-Tier one minion.
Turn Three (5 Gold) – Upgrade to Tavern-Tier Three and sell your minion for a better minion.
Turn Four (6 Gold) – If you have two minions, then upgrade to Tavern-Tier Four and sell both minions for one more minion that’s better. If you didn’t purchase a token or other cost-reduction by now, simply buy two more minions.
Turn Five (7 Gold) – If you haven’t already upgraded to Tavern-Tier four, do so now and buy one good minion. Reroll if necessary. If not, look for pairs, triples, or other strong Tavern-Tier four minions, as discussed earlier.
Turn Six (8 Gold) – Start looking for powerful Tavern-Tour four minions that carry you while you look for a triple or one that you can turn into a win condition such as Mechs, a Taunt composition, or a Warband to synergize with Groundshaker.

When it comes to when you pick Forest Warden Omu, honestly, she is great with many of the tribes in the game. Murlocs, Elementals, Beast, and Pirates allow Omu to be strong with the tokens and Deck Swabbie. Quilboar and Mech give her a good backup plan if you reach Tavern-Tier Four without a triple. And the Dragons tribe has one of the best win conditions in the game to discover from Tavern-Tier five through Kalecgos.

The only tribe that Forest Warden Omu doesn’t specifically benefit from is the Demon Tribe. Demon Warbands want to buy specific cards like Wrath Weaver & Demons, which don’t need to level nearly as fast as Forest Warden Omu wants to do. That doesn’t mean you never pursue a Demon Warband, but it does mean you don’t utilize Everbloom nearly as much as you might with other Tribes.

That should give you a good idea of the best way to utilize Everbloom & help you take your Forest Warden Omu game to the next level. Take advantage of the extra gold and extra ramping ability Omu access. Even if you cannot find triples, you still have the strength of having first access to strong cards in the game. Avoid ramping too fast and leaving yourself open to taking too much damage too quickly. Do not go to Tavern-Tier Five if you don’t have a plan on what you’re doing there. Remember, the pool gets more limited as the rounds go on, making it tougher to find the units you want to add to your Warband.

For more of My Battlegrounds content, follow on Twitch, Twitter, or join our discord! Are you looking for something more? Read all about the up-and-coming heroes Xyrella & Vol’Jin & Mutanus & Trade Prince Gallywix & Kurtrus the Ashfallen and the old favorite Millhouse Manastorm!