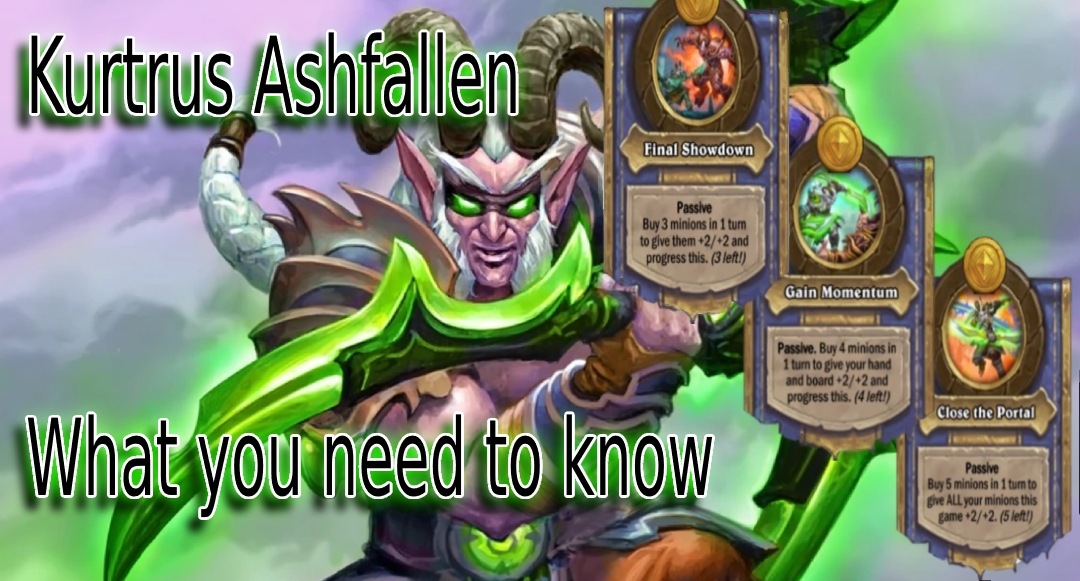 Kurtrus Ashfallen is the hero introduced in Patch 20.8 and is the first-ever Battlegrounds hero with a three-part ability. The three parts of the ability are called Final Showdown, Gain Momentum, and Close the Portal.

Overall, these spikes in power give Kurtrus Ashfallen one of the strongest mid-game spikes in the game. By being able to do this, he can ride that momentum into winning his lobby.

Despite what many may think, Kurtrus does not need to hit his hero power as soon as possible. Ideally, you want to get it all completed before turn nine, but you should focus more on getting a good board and game plan as you are doing that. Always buy the best minions you can and try not to force your hero power if it results in a loss of tempo and value.

When it comes to which tribes Kurtrus wants, he is most comfortable when Pirates, Demons, and Mechs are in the game. Beast and Elementals are the second-best tribes. Not to say Murlocs, Quilboars or Dragons are particularly bad on him, but they have little synergy with his hero power.

Your key cards are Freedealing Gambler, Murloc Tidehunter, Alleycat, Sellemental, and any minion with divine shields or deathrattles. These are the core pieces you need to make the most out of Kurtrus’s abilities.

Kurtrus Ashfallen finds a lot of success in the early rounds by activating the Final Showdown early in the game. Due to the extra strength that it grants the minions, you can win the majority of fights, regardless of the initial quality of your minions. The additional stats that the second phase Gain Momentum and the final stage Close the Portal grant work better on some units than others. Commonly that means units like Mechs due to their ability to get Divine Shield later in the game.

Once you have all three steps completed, every minion in Bob’s Shop has the +2/+2 buff applied going forward. While the extra stats on their own can’t lead you to victory, they make you stronger while you find a way to victory.

One of the most common mistakes people make with Kurtrus Ashfallen is the curve they follow throughout the early rounds. Following the standard curve, most Battlegrounds heroes utilize is often not always the optimal route for Kurtrus Ashfallen. That is because Kurtrus needs to buy more minions than most heroes, as you often sell more aggressively than other heroes might. A great example of that is when you find a shop with strong T units you want to pick up or buff in the following round, where other heroes would try and reach T5 as early as possible. When that situation occurs, Kurtrus Ashfallen gains more from having a solid turn to activate Gain Momentum or Close the Portal than he does from reaching a higher Tavern-Tier.

Some of the best units to buff include Deflect-o-Bot, Arm of the Empire, Bronze Warden, Crackling Cyclone, and Rat Pack. Other cards like Freedealing Gambler, token generators, Impatient Doomsayer, and Witchwing Nestmatron make it much easier to buy the required number of units in the upcoming steps and are a high priority.

However, it may be better to work towards your discovered card’s game plan if you find triples if it has more potential than pushing to complete your abilities. For example, if you find yourself with a Kalecgos or Mama Bear and you have not yet activated the third step, Close the Portal, then it may be better to focus on getting dragons or beasts first before finishing your last hero power. It is still ideal you get it done, but it is not as important as getting your main game plan going.

While not as complex as some other heroes, there are a few ways to do Kurtrus Ashfallen’s leveling curve. The first is your baseline curve and is the simplest of the three.

Alternative: If you started with a token generator, Bob has another token generator, and the other minions are also good, then you can do this strategy: Buy the token generator. Sell all four of your minions, and buy two good minions from Bob’s shop. If they are not minions worth investing in, then proceed to the next step.

Turn Seven (9 Gold) – Upgrade to T4. Buy one. Do not sell any minions. You should be strong enough not to take damage even if you are weak. You will need the extra minion to activate your second ability, Gain Momentum, next turn.

Turn nine (10 Gold) – Buy three minions, sell two. Then buy one more, sell three more minions. And buy the last minion to activate the last step of your hero power, Close the Portal. If you have extra gold from Warden of the Old, Freedealing Gambler, or token generators, then reroll if necessary to get better minions.

Turn ten (10 Gold) – With your newfound strength, you should be able to do one of two strategies:

There may be situations where Bob is offering you amazing cards at tier three. Since turns one to six won’t be much different, let’s start from Turn seven. Some cool strategies become an option when that happens due to the strength of Kurtrus Ashfallen’s abilities.

Turn seven (9 Gold) – If Bob offers any of the core mentioned above cards from Kurtrus’s game plan section, stay on T3 this turn instead. Buy a unit, sell three, buy three. Reroll if necessary. Doing that allows you to activate the second ability, Gain Momentum.

Turn eight (10 Gold) – Buy three minions. Sell two. Buy one more. Reroll. Sell four minions and buy one last minion to complete Close the Portal early. In an ideal situation, you have leftover gold from cards like Warden of the Old, Freedealing Gambler, or Token generators to make this easier, allowing you to sell fewer units this round.

Turn Nine (10 Gold) – Upgrade to T4. If Bob has good minions, buy those to replace weaker ones. If not, reroll until you find one worth upgrading.

Turn Ten (10 Gold) – With your newfound strength, you should be able to do one of two strategies.

Turn one (3 Gold) – Buy a token generator or a good minion.

Turn five (7 Gold) – If you have a token generator or Freedealing Gambler, then sell those and buy three minions to complete Kurtrus’ first ability. If not, then just buy two.

Turn six (8 Gold) – If you still have not activated the first step, Final Showdown. Sell one minion and buy three minions. That option assumes Bob offers you decent enough minions. Otherwise, your main option here is to upgrade to T4 now.

Turn seven (9 Gold) – If you stayed behind one turn, upgrade to T4 now, and buy one minion. If you are on T4 already, buy three minions, sell three, and buy a final one to activate Gain Momentum.

Turn eight (10 Gold) – Depending on which step you are on now, buy the necessary minions you need to get your next step, whether it’s the second step, Gain Momentum, or the final step, Close the Portal.

Kurtrus has three builds he particularly enjoys, builds with Divine Shield, Deathrattle builds, or Demon Famished Felbat build. The Divine Shield is obvious, they make great use of his extra stats. Deflect-o-Bot, Crackling Cyclone, Bronze Warden, Pupbot, and Annoy-o-Module make great use of the stats, and when combined with Gemsplitter, becomes really terrifying to fight.

Tokens that come out of other minions such as the deathrattles from Ghastcoiler all gain an extra +2/+2 in stats. This gives him a little bit of strength in deathrattle centered builds like Soul Juggler Demons or Mama Bear beasts.

Famished Felbat has the ability to eat minions from Bob’s board to gain their stats. Since all of those minions have an extra +2/+2 from your ability, your scaling on Felbat becomes much faster than other players.

For more of My Battlegrounds content, follow on Twitch, Twitter, or join our discord! Are you looking for something more? Read all about the up-and-coming heroes Xyrella & Vol’Jin & Mutanus & Trade Prince Gallywix & the old favorite Millhouse Manastorm!