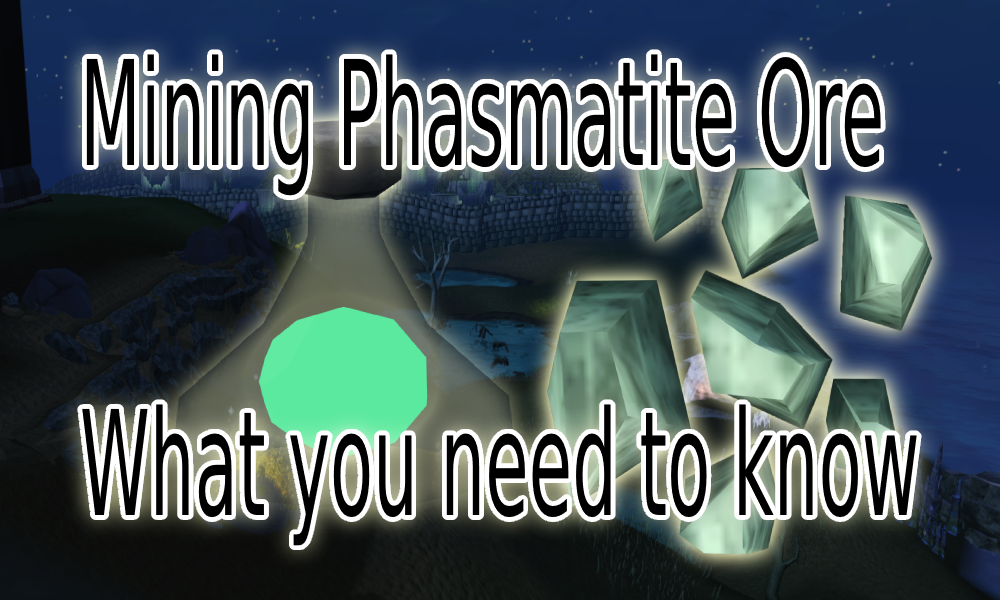 Phasmatite Ore is one of the primary resources players use to create the tier 70 resource, Necronium Bars, alongside Necrite Ore. However, unlike Necrite Ore, there is only one location with easy access to Phasmatite Ore in the entire Runescape world. Let’s discuss your options and which location is best to mine Phasmatite Ore.

Where you can mine Phasmatite Ore

There are four locations within Runescape where players can find Phasmatite Ore. The locations with the most Phasmite Rocks include the Haunted Mine and the deep-Wilderness Lava Maze Mine. In addition to those, two locations are more easily accessible found in the Dwarven Mines and South of the Port Phasmatys.

Due to the distance to the distance from the Haunted mine to the closest banks in Burgh de Rott, it is the worst location to collect Phasmatite Ore. Even for the players looking to use Signs of Porter there are better alternatives available. The same principle works for the deep-Wilderness Phasmatite rocks; there is no reason to mine in a location with the risks that the Wilderness brings, that far away from the bank.

The “Ideal” location to mine Phasmatite Ore is in the Dwarven Mine, located north of the city of Falador. The Phasmatite Ore in the Dwarven Mine has the closest access to a Bank. However, to access the Phasmite Rocks in the resource dungeon there, players need a minimum of level 71 Dungeoneering, in addition to completion of the Demonheim Hard Tasks. It is possible Ironmen especially find themselves with many of the requirements to complete the area tasks. As such it could be worth the time to complete the hard tasks. As ironmen need more than 1600 Phasmatite Ore to reach 80 Smithing.

Why you should mine at the Port Phasmastys South Mine

In addition to the three locations mentioned earlier, there is one more location that most players looking to collect Phasmatite Ore should visit. The Port Phasmatys South Mine is the smallest Phasmatite Ore, with only three Phasmatite Rocks. The mine is the second closest mine to the bank, south of the mine at the Archeology Everlight Digsite. The only requirement to access the area is the completion of Priest in Peril, as it is required to access the Morytania region.

There are no limitations to when or what type of accounts can access Morytania as the prayer experience is optional, and the Priest in Peril quest requires no other quest or skills to complete.

Due to their low cost using Phasmatite Stone Spirits greatly increases the profit and ore players can collect each hour. For Ironmen, however, it isn’t likely they can access Stone Spirits by the time they train these skills, besides the occasional reward from the Rare Drop Table.