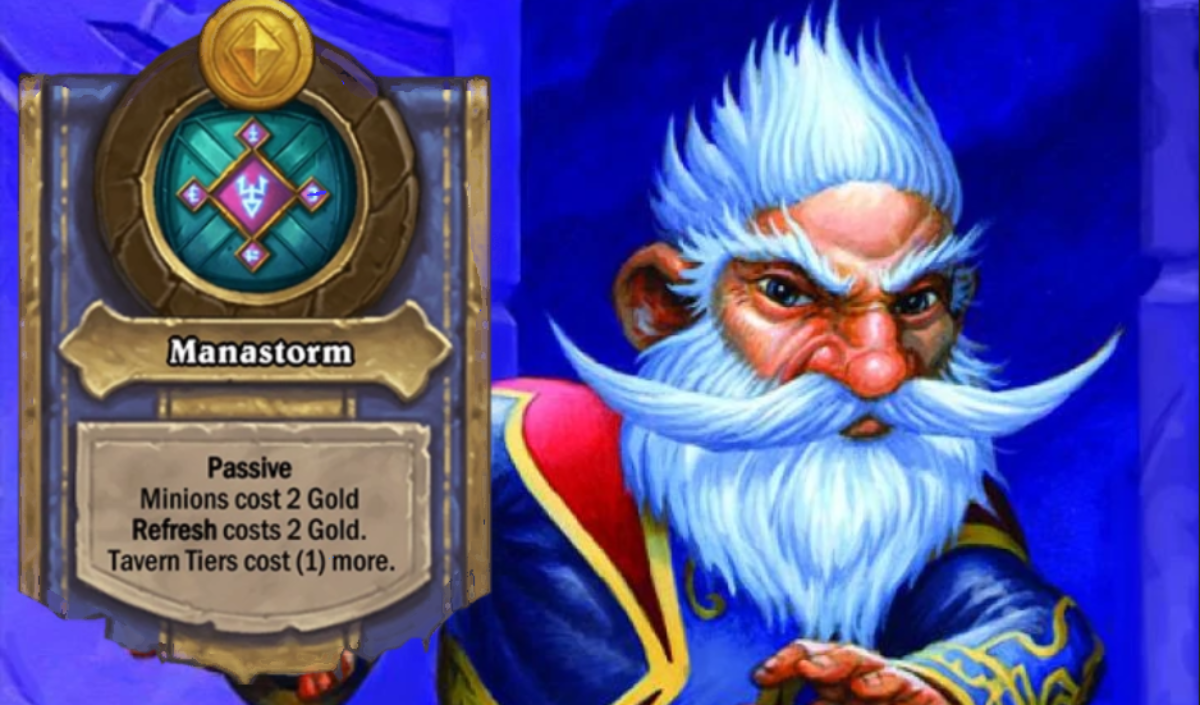 Millhouse Manastorm is one of the stronger heroes for which many players have room to improve. Millhouse Manastorm has the unique ability, Manastorm, that makes the units he purchases only cost two gold. That advantage comes with the downside that rerolling Bob’s shop also costs two gold instead of the usual one, in addition to Millhouse Manastorm’s Tavern upgrades costing an additional gold. There are many ways to improve how you use the effects of Manastorm that beginners might not realize.

The benefits of Manastorm

The main benefit of Manastorm’s effect is that all stat-buffing units only effectively cost a single gold, making them much more efficient to utilize than for any other hero. Other benefits include picking up units like Alleycat, Murloc Tidehunter, Murloc Primalfin, Murozond, and Tavern Tempest for free for various additional uses ranging from free battlecries to taking chances of finding rare and powerful units.

Later in the game, when you need to reroll, another benefit is to use Refreshing Elemental to reduce the cost of your reroll to one gold. For those reasons, much of Millhouse Manastorm’s strategy involves buying units as efficiently as you can while avoiding compositions that require a lot of rerolling, such as Pirates.

How to play the first rounds with Millhouse Manastorm

As Millhouse Manastorm has different rules for purchasing and rerolling, the curve you follow for him is quite different than most heroes in Battlegrounds. Below is a simple path to follow. Adjust as needed if any opportunities present themselves!

Turn one (Three gold): Buy a token if possible. If you find a token, sell the worse half & purchase an additional minion. If not, purchase the best minion available. Micro Mummy is the optimal non-token minion.

Turn two: (almost) Always purchase two minions. There is, however, a rare scenario where if you find a Deck Swabbie or a token on turn one, and your shop is entirely unusable, it is possible to level to Tavern-Tier two a turn early. That is a last-resort option, but it is worth remembering if the option presents itself.

Turn three (Five Gold): Buying the two best minions is often ideal, but it is possible to sell your worst minion to purchase a third one if there are upgrades available.

Turn four: Buy the three best minions available. You likely have more minions here than your board allows for, so hold onto the weakest ones as gold for future rounds.

Turn Five & Six: (seven & eight gold) Here, we start ramping up our Tavern. On both turns Five and Six, we upgrade to Tavern-Tier Three & four, respectively, and upgrade the worst minion from our board with the excess gold (if there is any).

From Turn Seven onward, we are looking to reach Tavern-Tier five & six as soon as possible. Many of Millhouse Manastorm’s best compositions require units from Tavern-Tier Five & Six, so getting there sooner rather than later increases your chances of finding what you need. However, it is important to balance the amount of damage you take during these turns, so decide when to rank up based on your current life total and how strong you believe your opponent to be.

Some of the Tavern-Tier five & six units Millhouse Manastorm is looking for include Kalecgos, Brann Bronzebeard, and Flat Tusk. There is more to learn about how each Tribe benefits Millhouse, so let’s delve into that next.

How each Tribe benefits and affects Millhouse Manastorm

Dragons are one of the strongest tribes for Millhouse Manastorm due to the strength of Kalecgos, Arcane Aspect. While Millhouse doesn’t like spending gold on rerolling units, the synergy between Kalecgos and Millhouse Manastorm when buying Battlecries is undeniable. Besides that, the Dragons tribe has many strong out-of-the-gate units that Millhouse uses to upgrade its Warband, such as Bronzewarden.

Forcing Pirates as Millhouse Manastorm is tougher than with most other heroes due to the extra cost of rerolling Bob’s shop. However, if the opportunity presents itself (see the common theme here?), it is one of the best users of the tribe. The main way to succeed with a dedicated Pirate composition is by finding two Cap’n Hoggarr’s. Often you find yourself with a single Cap’n Hoggarr from a Triple-up or as pick-up at Tavern-Tier five, which is decent to include in your in-progress rounds or menagerie Warband.

The moment you can find yourself a second Cap’n Hoggarr, you can do a lot with the Pirate tribe. Any Pirate you pick up generates gold for you, and Freedealing Gambler generates three gold anytime you find one. In addition, Southsea Strongarm, the Pirate that grants a buff for every Pirate you purchase in a turn, is a fantastic unit for Millhouse Manastorm at any point due to its flexibility with even just a single Cap’n Hoggarr in various compositions.

Elementals are one of the weaker tribes for Millhouse Manastorm, as, unlike many Battlegrounds heroes, it isn’t viable to pursue a Nomi, Kitchen Nightmare, Warband. Because of that, to even consider playing Elementals, you need to reach Tavern-Tier six at a decent life total first and then find the right Tavern-six units t start building your composition. If you are in that position, your main priority is to find Lil’Rag and Djinni of Zephyrs as they allow you to quickly and consistently scale your Warband.

Millhouse Manastorm builds Demons fine if an opportunity presents itself. As usual with the Demon Tribe, finding Mal’ganis matters a lot. Besides that, buffing your Blood Weaver(s) & Bigfernals should be your main priority. Often you prefer spending your health aggressively to reach the higher Tavern-Tiers, but if an opportunity presents itself to pursue a Demon Warband, it is certainly worth consideration.

Mechs were already one of the better Tribes for Millhouse Manastorm, and now with the buff to Deflect-o-Bot, the tribe is even stronger than before. The best use for Millhouse of the Mech Tribe is in conjunction with the other tribes available in your game through a Menagerie composition. Both the Lightfang Enforcer and Brann Bronzebeard Menagerie compositions lend themselves well to what Millhouse Manastorm wants to do, and including a strong Mech into that leads to great things.

It is possible to include two Mech’s into your Menagerie Warband if you can find yourself an Annoy-o-Module to connect to a “Reset” unit for Deflect-o-Bot. Just some reset units include Harvest Golem and Mechano-Egg.

Both the Murloc and Beast Tribe require a lot of rerolling to find specific units to succeed. Since Manastorm increases the cost of rerolling permanently for Millhouse Manastorm, it is best to avoid both of these tribes & Warbands whenever that is an option. However, if they are available in your game, they can make great additions to your Menagerie Warband.

Millhouse Manastorm is very reliant on what Bob offers due to the extra cost of rolling. As a result, he is not the most consistent hero available in Battlegrounds. In some games, he steamrolls a lobby with no effort. And other games, you might end up in eighth place, with no option to avoid it. Consider Millhouse Manastorm as a high roll hero, and play more aggressively to look for ways to get advantages. Use the extra tempo you generate early on to level aggressively and stabilize the game in a spot where you can look for ways to take the crown.

For more Battlegrounds, be sure to take a look at our recent projects for heros including Xyrella, Vol’jin, Dancin’ Deryl, Captain Hooktusk, Guff Runetotem, Mutanus the Destroyer, or my favorite Deathwing.