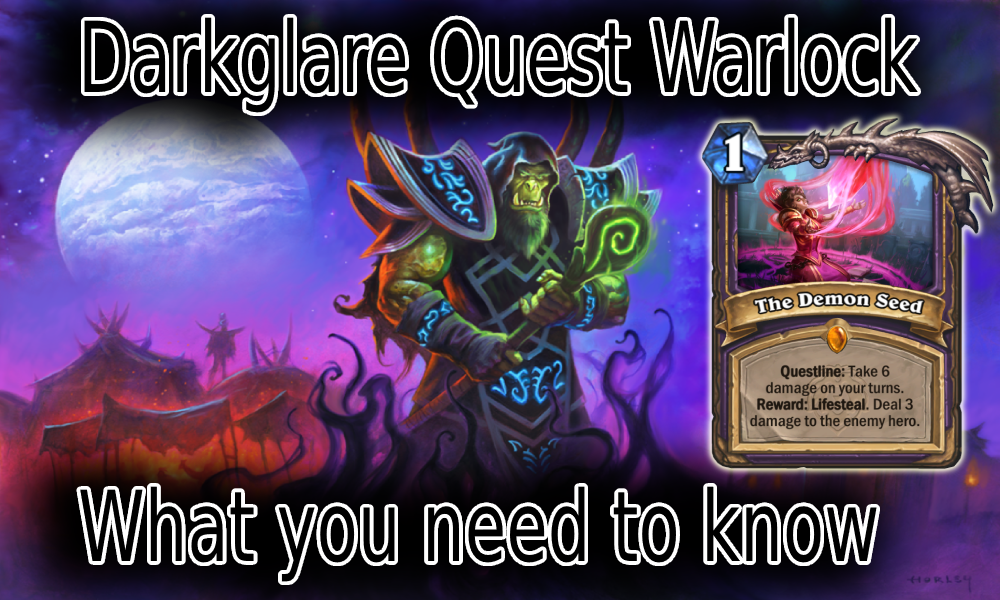 With the first day of the United in Stormwind expansion nearing its end, the king of Darkglare Warlock seems only to have improved. The new Darkglare Build, featuring the Demon Seed questline, is shaping up to be a contender for the best deck in the format. The explosiveness and consistency of Darkglare Warlock continue with the new iteration of the deck, yet with stronger tools to counter those pesky board clearing effects.

The Demon Seed Questline – How it works

Step 1. The Demon Seed – Take six (or more) damage on your turns.

Step 2. Establish the Link – Take seven (or more) damage on your turns.

Step 3. Complete the Ritual – Take eight (or more) damage on your turns.

After Complete the Ritual, you get access to the reward, Blightborn Tamsin. Blightborn Tamsin is a five-mana seven attack & health unit, with the Battlecry “For the rest of the game, damage you take on your turn damages your opponent instead.” However, the Demon Seed Questline doesn’t just work with the many self-damaging tools that the Warlock class accesses. Traps or secrets, like Explosive Trap and Explosive Trap, also progress the quest, as they happen on your turn.

The decklists of Darkglare Quest Warlock

There are two main decklists I want to share with you from the first day of the United in Stormwind expansion. The first list is by the Chinese player, Zhouchen, who achieved Rank 1 Legend shortly after the expansion release. The second list is by the Wild Hearthstone streamer Zeddy, which performed better for our team in preparation for this article.

Since the Demon Seed quest is your true win-condition of the deck, there aren’t any matchups where you can get rid of it in your starting hand. Alongside it, you just want cards that help you progress and survive through the turns. Things like Flame Imp and Crystalizer are better than most cards in your deck, and other tools like Unlicensed Apothecary are better later in the round. Try and think of which cards your opponent plays, and consider how your cards line up against them. A great example of that is a card like Spirit Bomb, which is amazing in certain matchups with must-kill units (like the Mirror match), and terrible against a class like Priest, who is unlikely to interact with their board in the early game.

However, there are some things you should be aware of before you queue up a game. The main one is that Darkglare doesn’t activate anymore after you play Blightborn Tamsin, as you don’t “Damage” your hero anymore. When first learning the Quest Darkglare Warlock deck, you might make the mistake of miscounting the number of Mana you’ll have available, on occasion resulting in an unnecessary loss.

On the other hand, Armor does not affect completing your Quest as it does with Flesh Giant. As such, if you need to, be sure to use your Armor generating cards to survive if you feel at risk of dying.

Another thing you need to remember when first learning the Quest Darkglare Warlock deck is that any excess damage you do to your hero doesn’t transfer. A simple example, if you use Flame Imp with two damage left on the Quest, the third damage point doesn’t count towards anything. As such, try and figure out how many turns you’ll need to complete and play Blightborn Tamsin, as completing it too early opens you to many different risks.

Let us know what you think of the Darkglare Quest Warlock deck as it continues developing! It is shaping up to be incredibly powerful, so better to be prepared and understand the deck for when you inevitably face off against the deck.

For more United in Stormwind Hearthstone content, be sure to read our latest guide covering the new Tax Paladin build! For those more interested in Battlegrounds, be sure to take a look at our new cheat sheets for Curves, Compositions, and Heroes!