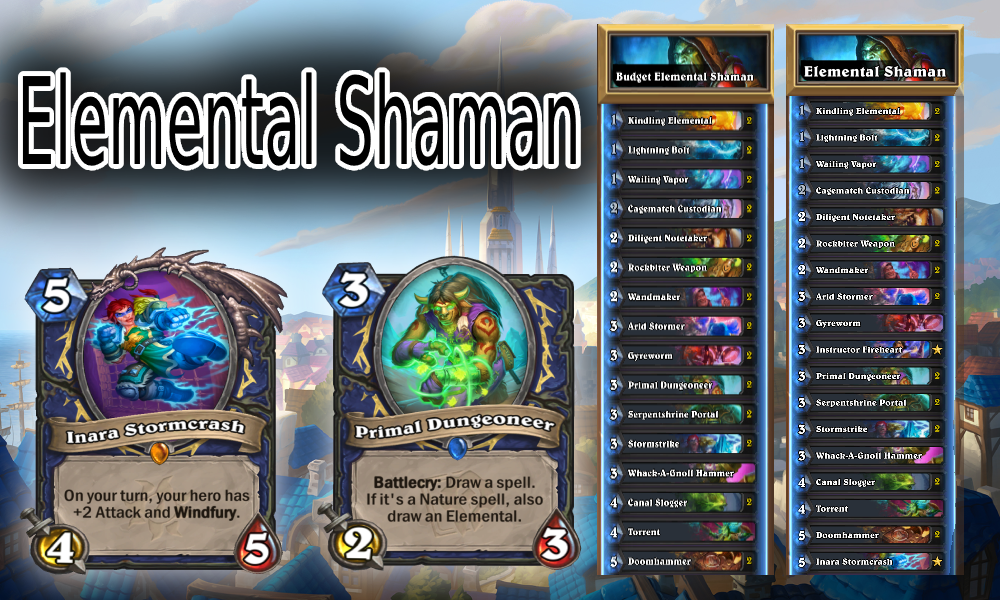 The only two legendary cards the Elemental Shaman deck includes are Inara Stormcrash and Instructor Fireheart. Both of these legendary cards are easy to replace for players on a budget.

What you need to know to succeed with Elemental Shaman

The Elemental Shaman plays similarly in many ways to most other aggressive decks. The obvious things to consider are whether you are up against an opponent who contests the board and how much you are willing to invest in fighting for it. Consider whether your opponent has healing, armor, or other ways to survive. And what their way to winning against an aggressive opponent may be.

However, there are some interesting synergies you can use to your advantage to improve your chances of success. For example, if you play the popular build, there are many ways to use Inari Stormcrash to your advantage. Deciding when you gain enough benefit from the extra attack and windfury effect to play the card is easily the most difficult decision the deck has to make. I’d love to give a simple answer of “when” you should use it. However, that all depends on the game state and against what type of opponent you play.

In general, if there is a reasonable chance of Inari Stormcrash surviving for more than one round, it is a great time to play the card. In other situations, you need the windfury effect to burst your opponent from a high life-total, which is common against opponents who include weapon-removal tools like Acidic Swamp Ooze to deal with your Doomhammers.

The mulligan for Elemental Shaman is more polarized than most other Hearthstone decks. Going second, there are only a few cards that really improve your chances of winning. Granite Forgeborn, alongside your one-cost Elementals, are easily the best performing cards for your mulligan stage. If you get to play first in the match, certain cards perform much better, like your two-mana cards. There are two exceptions to which two-mana cards you want to keep. These exceptions are Rockbiter Weapon and Diligent Notetaker. Both of which perform much better later in the game due to their various synergies.

A card people should keep more commonly is Primal Dungeoneer. Primal Dungeoneer performs well going first or second and makes the game feel “easier” to play out since it increases your options significantly in the coming turns. The reason for its strength comes from which spells the deck includes. Since every spell in the Elemental Shaman deck is a Nature Spell, it guarantees to draw both a spell and an elemental.