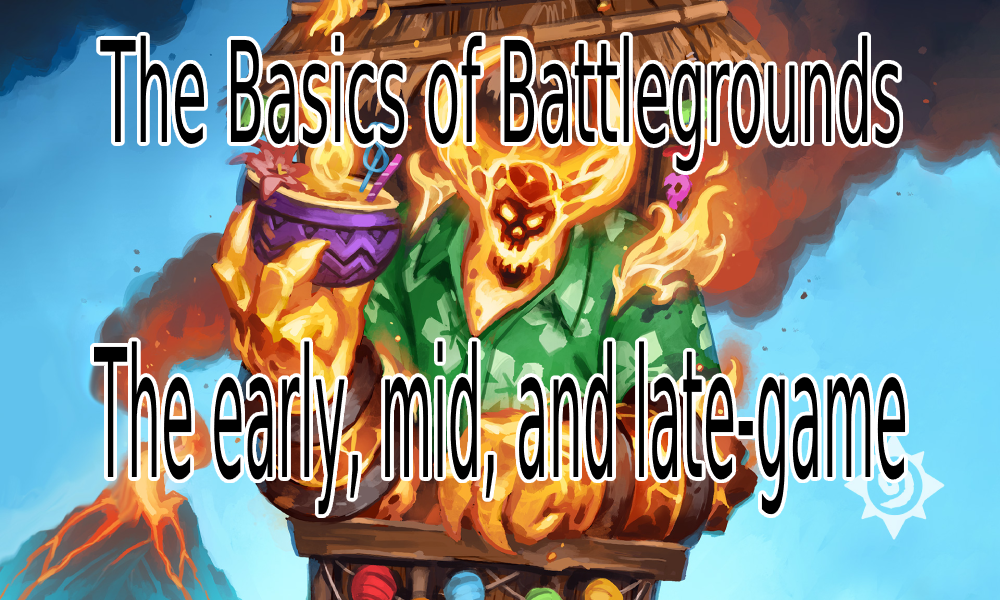 In most Battlegrounds matches, there are three recognizable “stages” you need to know and understand. The Early, Mid, and Late-game all have their goals and actions you should often aim to follow. To make it simple, let’s assume the following to get started. The early-game lasts from round one (three gold) to round five (eight gold). The mid-game is from rounds six (nine gold) to round eight (ten gold). And the late-game starts after round nine. (ten gold)

The early game of a Battlegrounds match

In the early game, your minions start out small and weak. Even a single +1/+1 stat on a card determines a win or lose during a combat phase. Tier one minions we discuss more in-depth in a later edition of Basics. However, for Tavern-Tier Two, you want cards that do more than just be a 3/3 stat line minion. Cards such as Spawn of N’Zoth, Menagerie Cup, Kaboom Bot or Rabid Saurolisk should be sought out. Depending on your strategy, you have to think of the following things:

Early game is easy, mid game is where the game starts to get more difficult as the decisions you make become more crucial. As you learn how to play the game, these are the turns that determine who comes out on top. Players manage to keep up their strength, build synergy and form a coherent build are the ones on the road to success. Don’t just stick to one singular game plan, think about real hard on what Bob offers you and aim for the best results from those choices.

The mid-game of Battlegrounds, finding and building on synergy.

In the mid-game, you often start to form a synergistic build. You pair buffs with Divine Shield minions, taunts with less defensive units, or even tribes with other tribes. The mid-game is where you start to see many minion abilities, both on your side and in the Warbands of your opponents. When you first learn about Battlegrounds, the only important aspect is that your units need to work well together. Try and think of the following as you progress through your first games of Battlegrounds.

Those five points look intimidating at first, but the basics concepts you can pick up on fairly quick within your first games of Battlegrounds. Some ways to mitigate your losses are not upgrading your Tavern when other players do or by buying stronger minions – now – but don’t perform well later. Some examples include units like Mechano-Tank, Savannah Highmane, or Ring Matron.

The decision between wanting a Tavern-Tier five or six unit becomes easier with time. Finding the right balance is difficult, but as a basic concept, consider the following. If you “feel” strong in your lobby when you have the option to triple up and discover one of these strong units, go for it. If you prefer to play more carefully because of your weaker Warband or lower life total, play for a Tavern-Tier five minion instead.

Long-term, that isn’t a habit you want to develop, but that is a great starting point for new players.

The late-game. How your win-condition, builds, and your opponents all affect your choices.

If you make it to the late game of a Battlegrounds Match, you likely have a win condition and should prioritize finalizing your build to defeat your opponent(s). Likely your build either has synergy or minions with a bunch of stats. Now that the game is near its end, you must think about the following:

Points #2 and #3 are especially important as your opponents become better at Battlegrounds as you improve your rating. Some examples of “weaker stats” minions include some that buff your other minions. Some great examples of ones you may replace are all the scaling minions like Charlga, Lil’Rag, or Lightfang Enforcer. As for minions you want to replace your “stats” units with, the best example is Selfless Hero. The Divine Shield landing on the right target can change the battle in an instant.

For more of My Battlegrounds content, follow on Twitch, Twitter, or join our discord! Are you looking for something more? Read all about the up-and-coming hero Kurtrus the Ashfallen, the classic Forest Warden Omu, or the latest version of Galakrond! Looking to learn more about Battlegrounds’ strategy instead? Why not read our latest strategy article covering the new Shinese Curve.