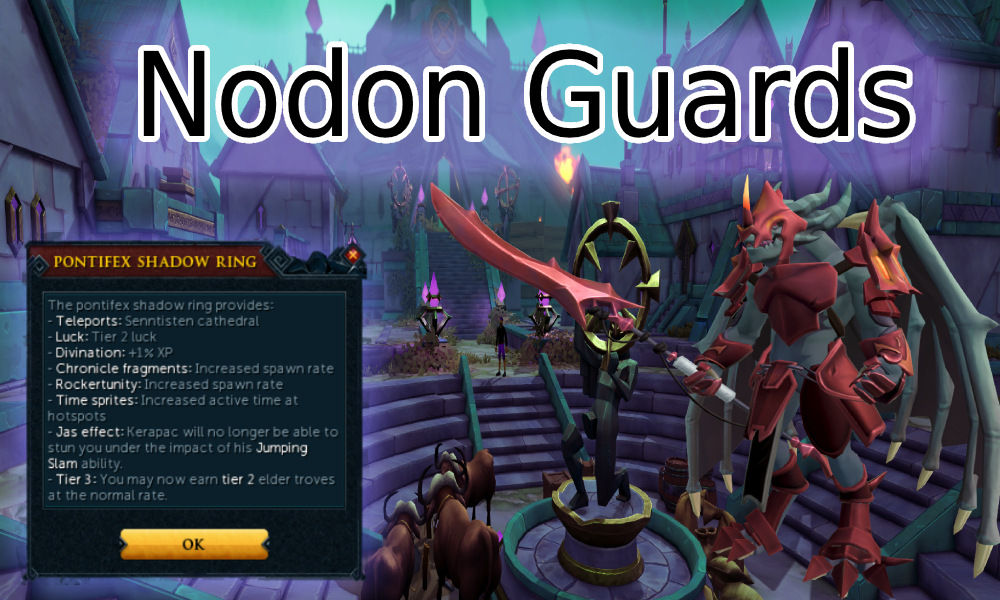 With the release of The Elder God Wars Dungeon on July 26, a new slayer monster, the Nodon Guards, became a part of the Runescape world. You find The Nodon Guards in the city of Senntisten, near the Kerapac, the Bound boss-fight. To reach the Nodon Guards, the best ways are to visit the War’s Retreat or to visit the north of the Digsite east of Varrock. In the north of the Digsite, you find the Ancient Gate, which leads to the city of Senntisten.

How to kill the Nodon Guards

The Nodon Guards have a significant weakness to Magic, as they are melee users. In particular, Air Surge works well against the Nodon Guards. The only mechanic that you should be aware of is when the Nodon Guard jumps into the sky, then uses a small area of effect ability that you can dodge by moving any tile.

Killing Nodon Guards does require a level of 92 Slayer or higher, but no quests are required to enter the area besides the Battle of the Monolith mini-quest, which has no requirements. Besides that, the fight is as simple as point and click on the monsters and picking up the loot and charms as you go.

Why you should kill Nodon Guards

There are many reasons why Nodon Guards are worth killing right now. The first reason is the experience they grant upon death. With 30,000 health and very low defense, they are a great way to train up your combat and slayer skills. The second is the bones. Each Nodon Guard kill grants a minimum of one Dragonkin Bone, which is worth around 12k. While collecting all the bone drops, a great way to extend your trips is to use Magic Notepaper.

However, the drops and the experience aren’t the only thing you want from the Nodon Guards. One of the main draws for Ironman is the drops of Resonant Anima of Jas. Resonant Anima of Jas’ current only use (more uses expected once the other Elder God Wars bosses release) is to upgrade the Pontifex Shadow Ring from the City of Sentisten Quest. By charging the ring with 1000 Resonant Anima of Jas, you gain immunity from the Stuns in the Kerapac, the Bound Boss-fight. In addition, upgrading the Ring also improves the rewards of all monsters & the bosses of the City of Sentisten by granting them access to upgraded Elder Trove cases.

Without the upgraded Pontifex Shadow Ring, early estimates put the loot from killing Nodon Guards at anywhere between 1.5 to 3M gold per hour. Excluding the price of the Upgrade Kits.

The tentative Droptable by Runewiki

The Nodon Guards are also one of a few monsters within the City of Senntisten that drop the upgrade kits for the various cannons in Runescape3. The rates are unknown for now, but early estimates suggest the drop rate is significantly better on a Slayer Task, which follows the pattern of new Slayer monsters of Runescape3.